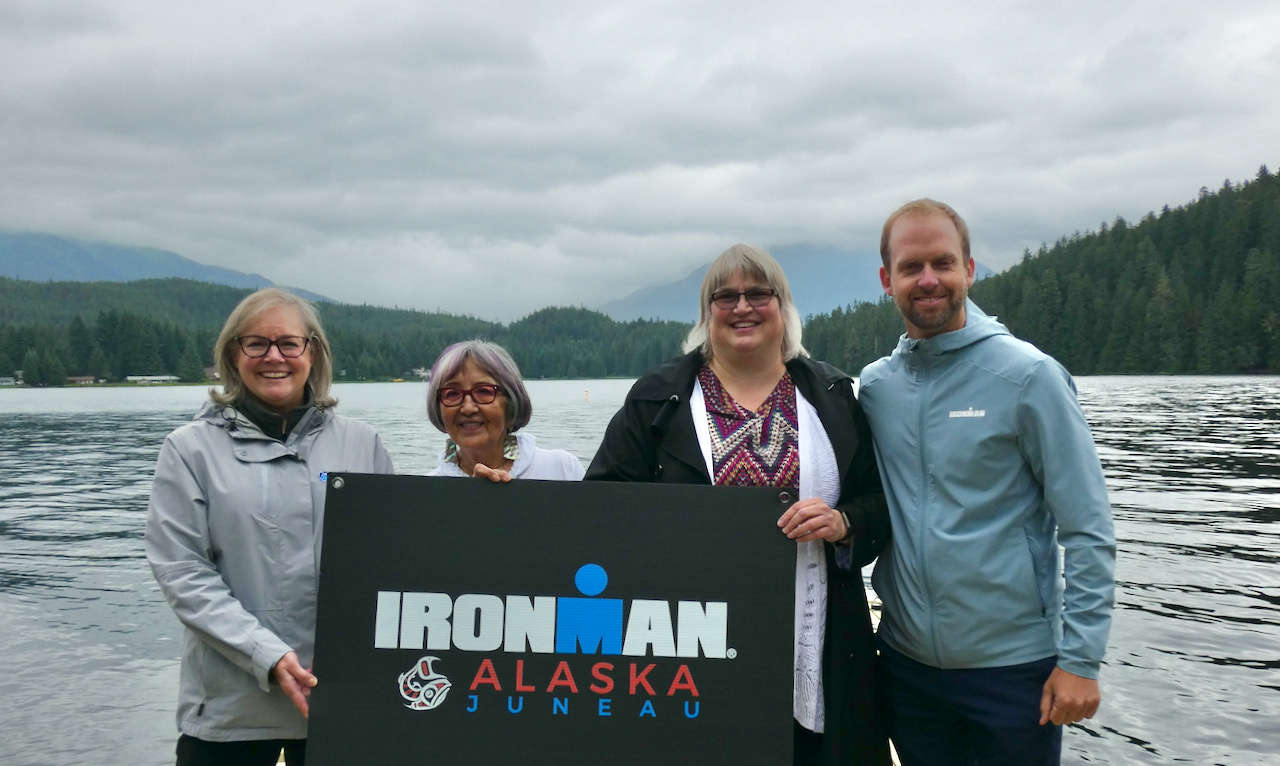 Juneau, Alaska (KINY) - The beauty and strength of the native people of Alaska and the exhilarating wilderness surrounding Juneau were highlighted in an announcement on Monday by the IRONMAN Group of the capital city’s selection as the next full IRONMAN Triathlon - a 2.4-mile open water swim, a 112-mile bicycle ride and a 26.2-mile marathon run.

Standing on the University of Alaska Southeast dock, the central hub of the race, with Auke Lake in the background, and cloud-fringed mountains beyond, dignitaries from IRONMAN and Juneau cemented their partnership that launches the inaugural triathlon on Aug. 7, 2022.

“We could not be more excited about this incredible destination for the same reasons that are right behind us now,” IRONMAN regional director Dave Christen said to a Facebook Live audience, with limited gallery attendance. “This is a truly stunning location. This is a world class host community that is ready to welcome you all to this amazing experience.”

Liz Perry from partner Travel Juneau, the convention and visitors bureau, said the story of Juneau inspires people from across the globe, “to visit the rugged and challenging beauty of this place … being in Juneau is like being in a 3-D version of National Geographic Magazine.”

Beth Weldon, mayor of Juneau, began her first comments by recognizing that the city and borough were on Tlingit land and honored the indigenous people of that land.

“We are grateful to be part of this community and to honor the culture, tradition and resilience of the Tlingit people,” Weldon said.  “We are absolutely thrilled to be selected as the host of IRONMAN Alaska.”

Sealaska Heritage Institute President Rosita Worl welcomed the audience to the homeland of the Tlingit, Haida and Tsimshian people. She spoke both in English and Tlingit.

“We are indeed proud and happy that you have chosen our home land,” she said.

“I am an Eagle (moiety) of the Thunderbird (Shangukeidí) clan and I am from the House Lowered From the Sun (Kawdliyaayi Hít) in Klukwan, the Chilkat area,” Worl said. “I am also proud to be a child of the Lukaax.ádi yadi, the Sockeye Clan… I must say to G̱ayéisʼ Ḵáa, Iron Man, that we share many values. I can see from the things that you do and that we do, we have many things in common.”

“Our people trained like you,” she said. “It was in waters like this that our young men had to stay in the water while the tide went out that we began to train our young people. And we know that it is through our strength that we have been able to live on this land for more than 10,000 years.”

Worl gestured to a Tlingit artist’s work next to her that depicted a Tlingit strongman ripping apart a sea lion.

“We also had heroes,” she said. “He wasn’t just ripping apart the sea lion for the fun of it. He was bringing it home to our people because our people were trained to help each other, and support each other, and to share all of our foods.”

Worl hoped that those watching would learn of the traditional games of the indigenous people that were replicated to make the Tlingit strong so they could go out hunting and fishing.

“And today they have this wonderful sport called Native Youth Olympics,” she said. “And I hope you will be able to see how it is that we today train our people. And I know that some of our people will join your people also in the kind of training that you do. So thank you for coming to our country and I know that you will be welcome here by all our people and we want you to enjoy yourselves in Juneau, Alaska.”

Her granddaughter, Crystal Worl, designed a formline black and red salmon as part of the IRONMAN Alaska logo.

“I think it is great,” Rosita Worl said. “Part of our mission is to promote cross-cultural understanding and support cultural diversity. And here we have people from all around the world who have the same cultural values that we have - Haa Latseení­ - strength of body, mind and spirit. It’s a common cultural value. And it is a cultural value that I think strengthens us as a people, as a society, and I think that is what is good for everybody. It’s not good just for the Tlingits and Haidas and Tsimshian and it’s not good just for the athlete but I think it is good for the world.”

The IRONMAN Alaska course route would include two loops inside Auke Lake for the 2.4-mile swim, a ride from Auke Lake to the literal "end of the road" at mile 37 twice for the 112-mile bike, and a run on the Mendenhall Loop Road up through the Montana Creek Road and back down and around Auke Lake on the Kaxdigoowu Heen Dei (Brotherhood Bridge) Trail to total the 26.2-mile run.

Christen said priority registration would open on Monday at 12 p.m. eastern time, expecting it to sell out before general registration opens the following week.

“It is time to create experiences that are truly unique in the event space,” Christen said. “Juneau will not disappoint. It is our first soiree into something that is really outside the norm. This is a beautiful destination with a community that knows what they’re doing and knows how to do it. Juneau has the right boxes to tick. Just like when you are shopping for a home we look for certain elements that a community might have and Juneau had all the right things. It had the beautiful swim in Auke Lake, had the great bike course that we could piece together, and it was really simple at that point to consider so many options that we could run to create a full IRONMAN.”

Christen would not detail a final number of entrants to be allowed, saying it would be an ‘intimate race’ and smaller than their other venues. He noted the entry fee would be similar to other IRONMAN events but athletes, in terms of value, would be able to “explore and ‘race-cation’ like they have never done before” and IRONMAN will build other ideas and concepts into the race week.

Residents of Juneau applying for the race will have priority access to the event more than most according to Christen.

“Just because of us being in their community,” Christen said. “So it is going to be an opportunity for us to say thank you to the people that are living here and hosting us… really anybody in Juneau that wants to race in the event we’re going to make room.”

Christen was asked if Mike Reilly, an IRONMAN announcer of acclaim would be calling the finish line.

“Mike Reilly the voice of IRONMAN is certainly aware that we’re coming up here,” Christen said. “He is excited about the opportunity and we work through those details with him every off season which will come soon and he’ll make that announcement whether he is coming or not. But he is pretty excited about Juneau.”

The IRONMAN Group reached out to Travel Juneau in 2020 to explore hosting the race in the Capital City. While a number of local triathlons are held each year in Alaska, this would be the first IRONMAN-branded event in the state. It would also be a qualifying event for the IRONMAN World Championship in Hawaii.

“Most people bring at least one bike to race on,” Bursell said. “A large suitcase of gear and usually a few people. The travel to Juneau is going to be a lot easier for most people than Hawaii.”

Bursell noted the flight would not be as far for most people and the temperature differential would be easier for racers to prepare for than the heat of Hawaii.

“I expect people will start showing up for the race up to two weeks before hand,” Bursell said. “To take a little vacation and do some training on the course and get used to the cooler temperature if they’re from warmer areas. And hopefully they will want to get together and do some training and we can show them the course.”

At that time Christen had stood at Auke Recreation Picnic Area with an arm fully extended above his head, looked out at the water and said, “This is the Hawaii IRONMAN.”

He lowered his arm an inch and said, “This is the Alaska IRONMAN in Juneau.”

Then he lowered it well below his waist, “This is all the rest.”

IRONMAN Alaska will be held the first Sunday in August for the next three years.

“But we plan on being in Juneau for a long time,” Christen said. “We just typically make agreements with Travel Juneau, the City and Borough for three years, that way it’s a good healthy review cycle just to make sure everybody is still working together.”

The partners plan on an extension discussion after a year-and-a-half.

IRONMAN Group assesses a race fee to recover a portion of its costs to organize these events.

Travel Juneau negotiated a reduced race fee of $100,000 per year, assuming a three-year commitment. Recognizing the financial impact of COVID-19 to Juneau, IRONMAN Group offered to structure the fee as $50,000 for year one and $125,000 for each of the subsequent two years.

“This is going to be unlike anything Juneau has ever seen,” Perry said, noting the sporting event does not require a stadium setting. “This lends itself to Juneau’s landscape and the facilities that we have.”

Perry also commented that they are working with Juneau’s Aukeman sprint triathlon on schedule conflicts.

In an earlier interview Perry noted each IRONMAN race would generate an estimated $7 million to $9 million of economic activity in the community, as well as $35,000 in Hotel Bed Tax revenue. 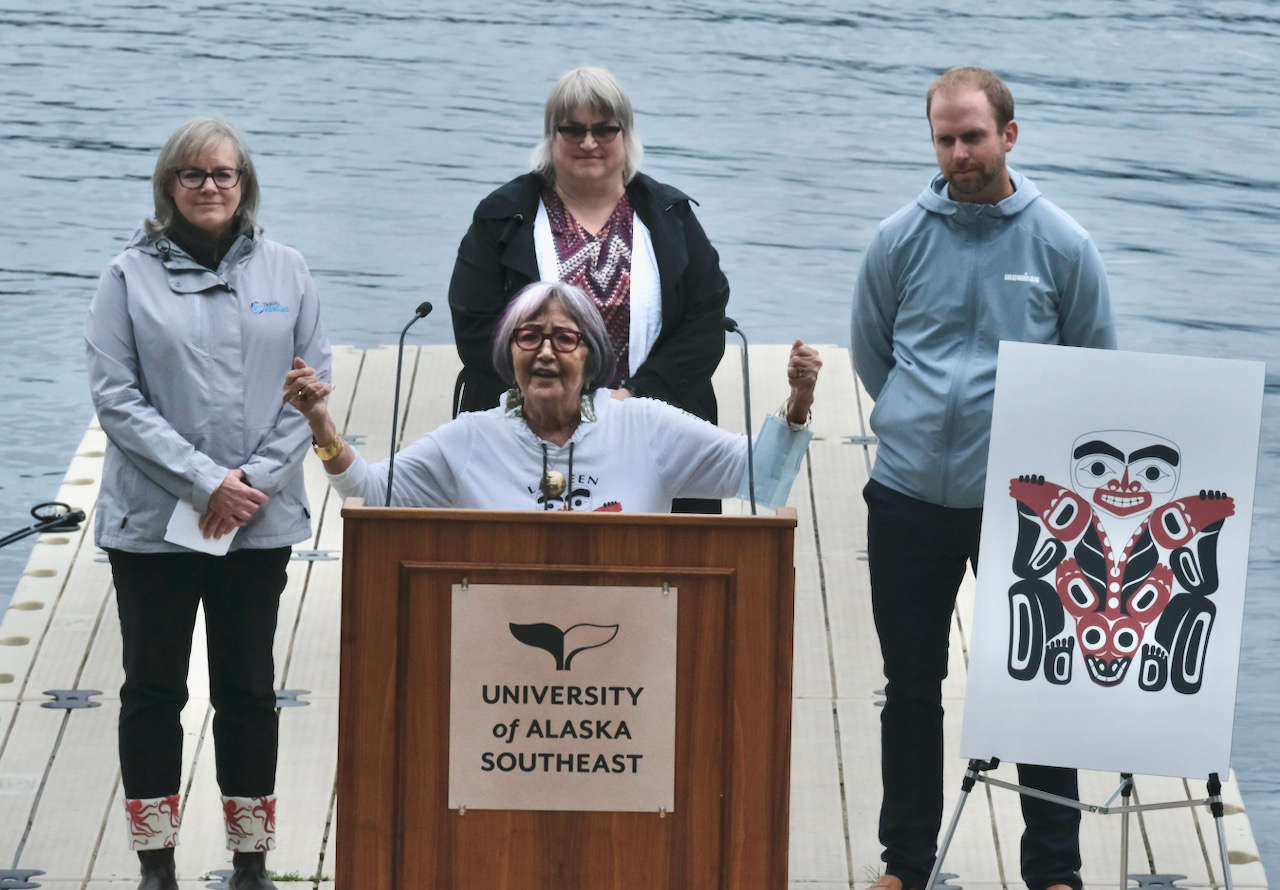 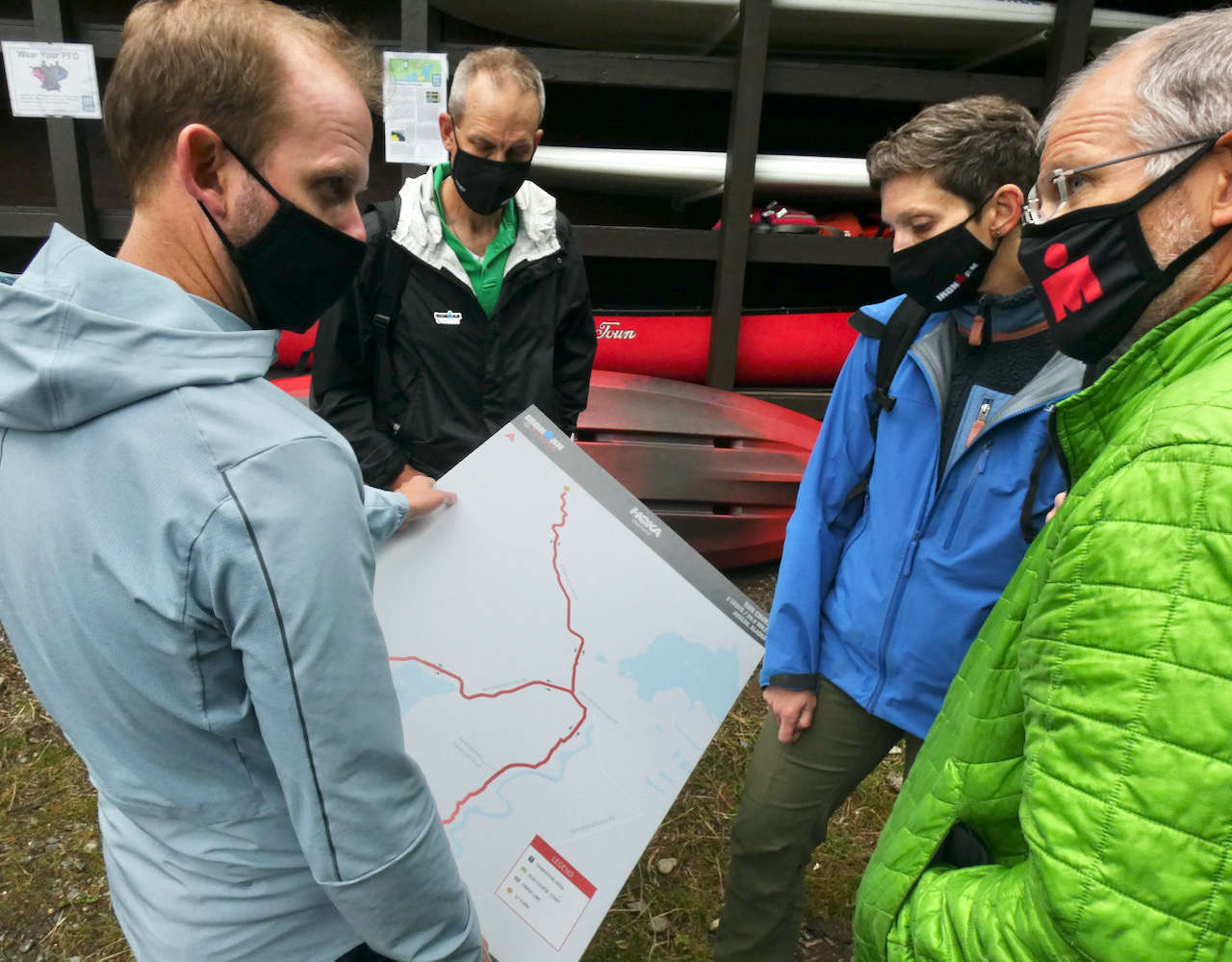 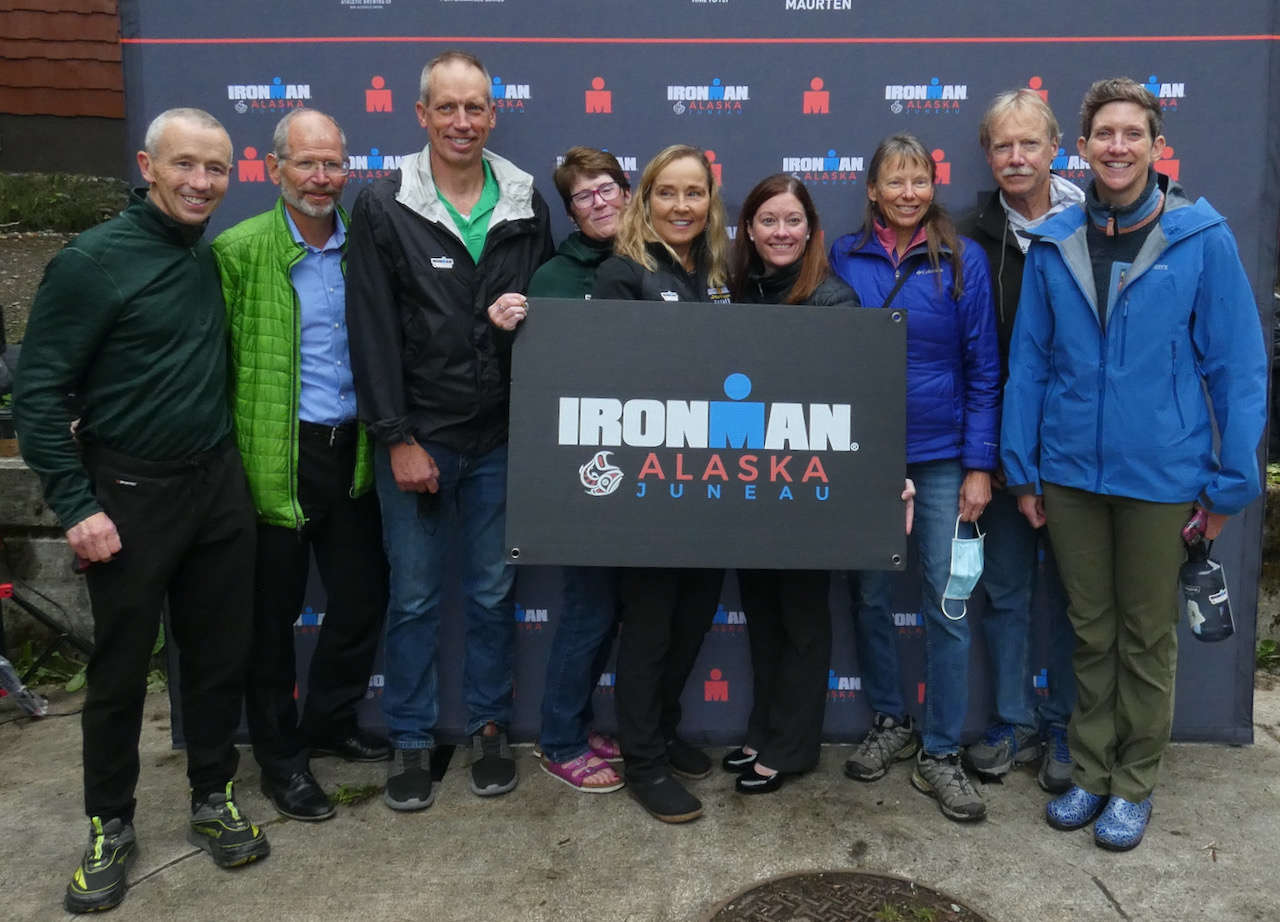 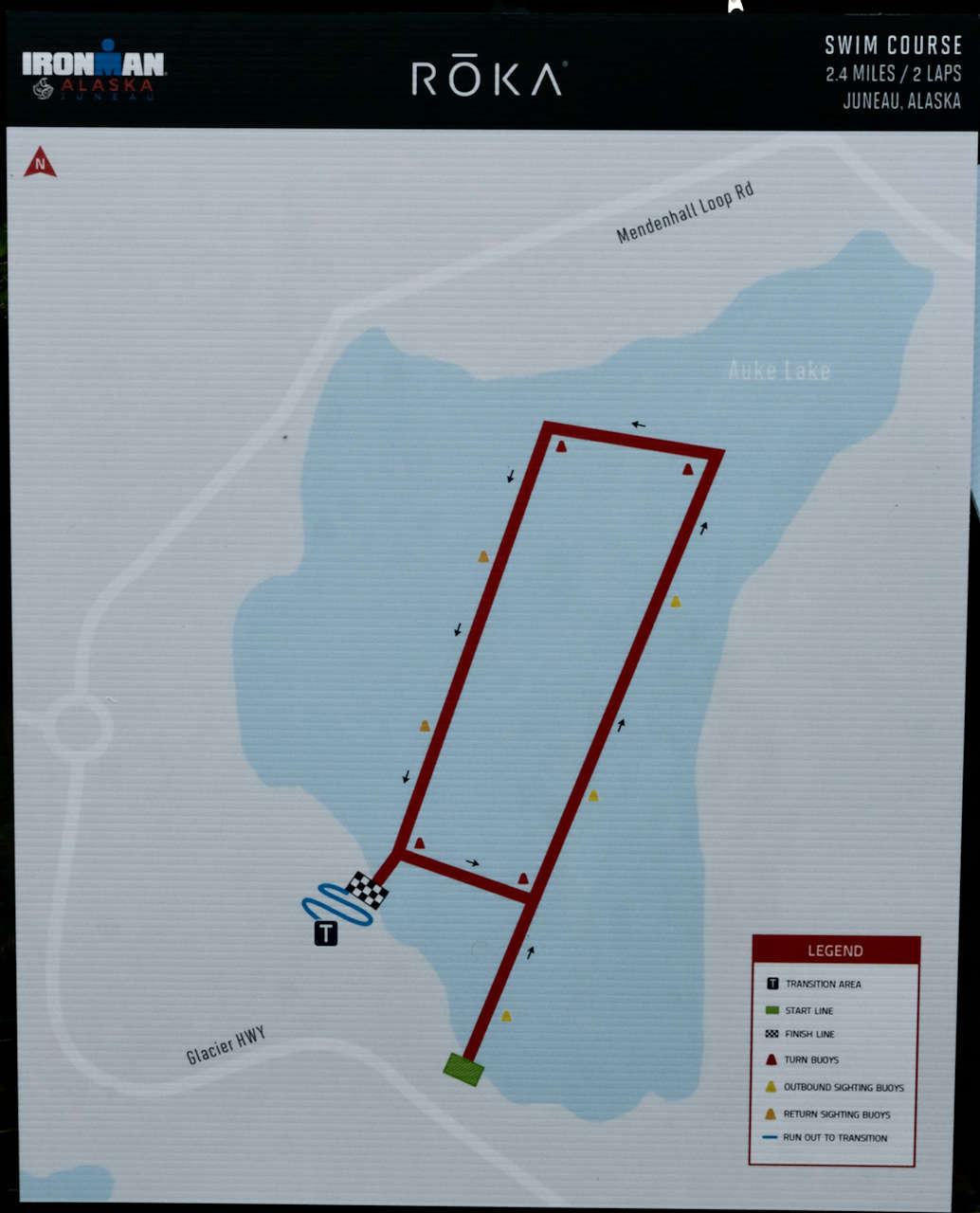 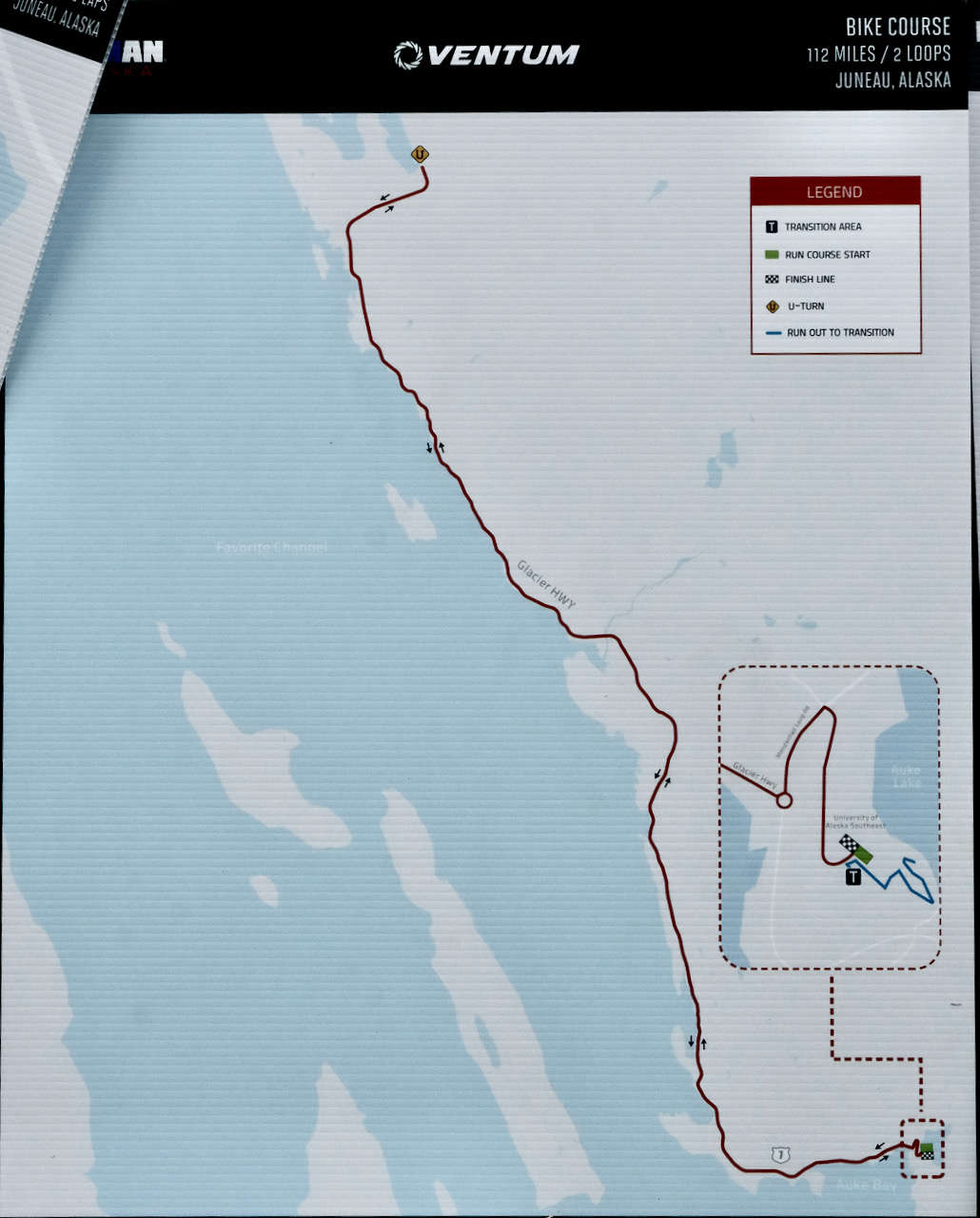 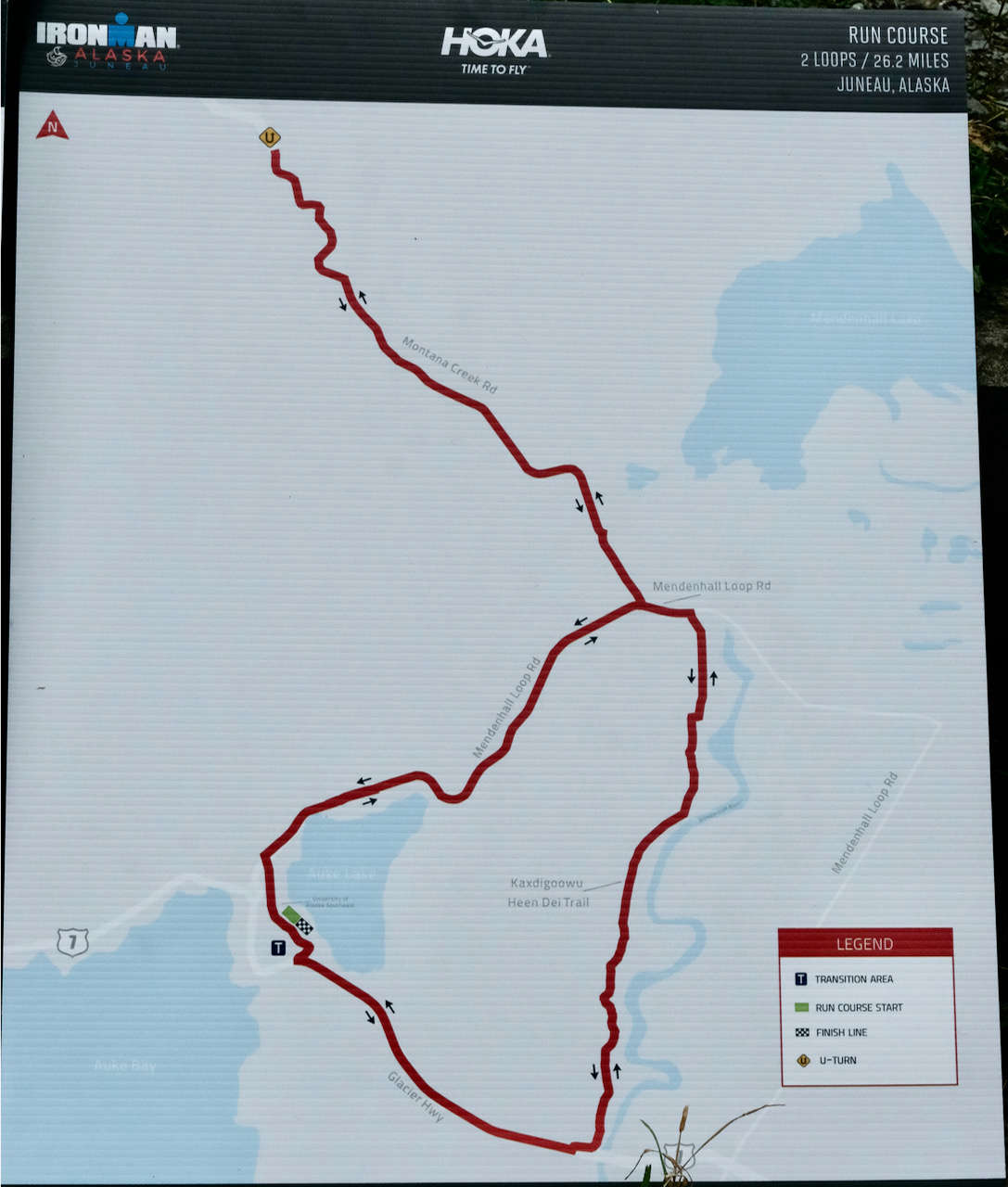