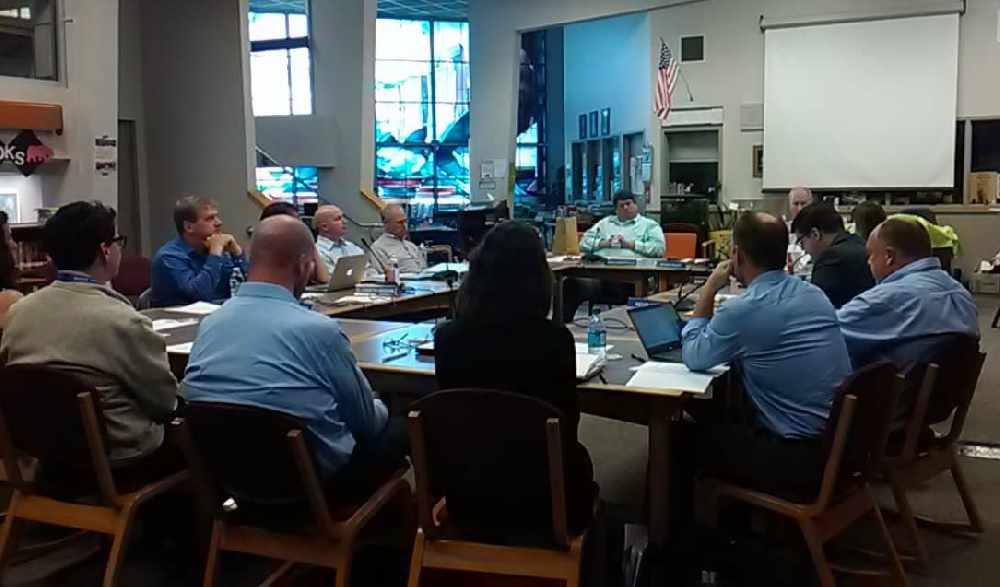 The Juneau School District Board of Education meets on Tuesday, Aug. 13 at Juneau Douglas High School (Photo by Greg Knight)

Juneau, Alaska (KINY) - The Juneau School District Board of Education has unanimously approved an indigenous language program for students in the borough.

The policy is the first of its kind in the state and could be a model for other Southeast communities in adopting language-related policy.

The board, in a statement connected to the item as it was discussed and approved Tuesday night, said it is dedicated to “supporting a comprehensive community plan for Tlingit language revitalization aimed at increasing the number of fluent Tlingit speakers, curriculum alignment of Tlingit language scope with other disciplines, and professional development for teachers and administrators on the integration of Tlingit language and place with content standards and instructional strategies."

“Some of this work can be accomplished within the framework of existing curriculum, programs and professional development efforts," said JSD Superintendent Dr. Bridget Weiss. "Some of this work may require additional resources from the district, cooperative community partnerships and grants.”

According to Dr. Weiss, during the past school year, the board and district participated in a Tlingit Language Revitalization Task Force. One of the task force objectives was to create a policy to support the work. A subcommittee of Dr. Weiss, Kevin Allen, Joe Nelson, Haifa Sadighi, and Dr. Jeff Short drafted a language revitalization policy for the TLRTF to review.

“The TLRTF provided input on the draft,” Weiss said. “The draft was also presented to the Board of Education Policy Committee, to begin the formal process of policy adoption. Once a final draft was complete, the Association of Alaska School Boards offered to run through it the legal review process they use for their statewide policy service.”

As the task force looked at the policy, Dr. Weiss said the overarching goal was to create an opportunity for the board and the district to make a statement of support for this work, to recognize why it is important, and to identify the district’s role.

“The revitalization of the Tlingit language is urgently needed due to the dwindling number of fluent elders,” Dr. Weiss said. “Fluency in the language expands economic, cultural, and academic opportunities for students. This is an overarching policy and underneath that comes the heart of the work and partnerships that goes on to bring life into this policy.”

The district, working with the City & Borough of Juneau Engineering Department, intends to submit one or more maintenance grant applications to repair potentially leaking roofs. The roofs of five schools have leaked during recent years.  In order to submit a grant application, the District must submit a six-year capital improvement plan listing each of the projects it wishes to submit to the department for state funding.

This plan can be revised at any time.

A study prepared July 2013 on the Dzantik’i-Heeni Middle School roof recommended short term work, which was completed last summer, and long-term roof replacement sometime during 2021 to 2023, which is one of the priority projects listed on this plan.

When the contractor renovated Gastineau Elementary School, portions of the roof were damaged. CBJ received an insurance settlement covering only a small portion of replacing the damaged section of the roof.

The Riverbend Elementary School roof has had several leaks that the maintenance department cannot locate despite many efforts. This plan is contingent if the leaks cannot be located and easily repaired. If the leaks are located and repaired, then this would be removed from future capital improvement plans.

The Juneau-Douglas High School roof leaked around the shower rooms and band rooms. It was caused by a plugged drain line. The roof was damaged. Maintenance will assess the roof and review and consider repairs. If it can be easily repaired, it will be removed from future capital improvement plans.

The Floyd Dryden east wing roof has reached the end of its useful life. Intermittent leaks have occurred in the last couple of years and expected to become more difficult to manage as the roof ages.

The last capital improvement plan approved by the Board and submitted to the Alaska Department of Education & Early Development was prepared in August 2018.

The first reading of Dr. Weiss’s new contract was also taken under consideration, with an executive session held after the regular meeting to discuss an evaluation of her performance.

On Jan. 8, the board selected Dr. Weiss as the permanent superintendent of the district. Subsequently, members of the board negotiated an employment contract with Dr. Weiss. The original contract for Dr. Weiss, starting Jan. 8, runs through June 2021. A superintendent’s contract is limited to three years under state law.