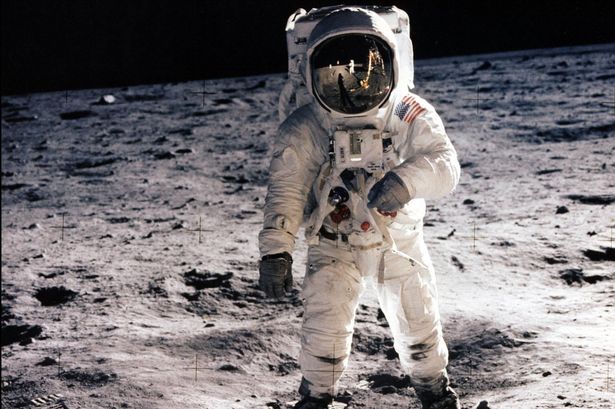 Juneau, Alaska (KINY) - The Alaska State Museum held a day long series of events for all ages to better understand the landing of Apollo 11 on the moon on July 20, 1969.

Connor explained humans and exploration have often gone together.  She noted Alaskans are among the groups that seek resources, new lands, new peoples and new opportunities.

President Kennedy challenged the Congress in 1961 to have a successful trip to the moon.  Until that point, USSR had been more successful in space with the 1959 Luna 2 landing on the moon.  The USSR's Yuri Gagarin on April 12, 1961, beat the USA's Alan Shepard on May 5, 1971, as the first man in space.

The moon is about 27-percent of the size of the earth.  The moon's surface area is about 14.6 million square miles.  It is about the size of Asia.

So how was the moon formed and where did it come from?

One theory claimed the moon was a sister world that formed in orbit around Earth as the Earth formed.  A second theory was the moon formed somewhere else in the solar system where there was little iron and then was captured into orbit.  The third idea was the early Earth spun so fast that it spun off the moon.

The consensus opinion today is the Moon formed out of the debris leftover from a collision between Earth and an astronomical body the size of Mars, 4.5 billion years ago.

Apollo 12 astronauts collected 75 pounds of soil and rocks from the Moon's surface.  Six Apollo missions landed on and departed from the moon between July 1969 and December 1972.  In total 842 pounds of Moon rocks were taken back to earth.  The oldest rocks were 4.3 billion years old.  They are enriched with magnesium, uranium and have similar isotopic ratios as earth rocks.

The museum also has a rock from Apollo 17 gathered by astronaut Eugene Cernan of Lunar basalt 70017.

Earthlings can get their hands on a moon rock from lunar meteorites.  They are rocks found on Earth that were ejected from the Moon.  About 100,000 Meteoroids strike the Moon every day.

There is nothing found alive on the moon.

Some 500,000 people were involved in the US mission to reach the moon.  In addition to the US and USSR, China and Israel have made trips to the Moon.

Prior to the lecture, the crowd was treated to a 30-minute video shot of the moon landing.