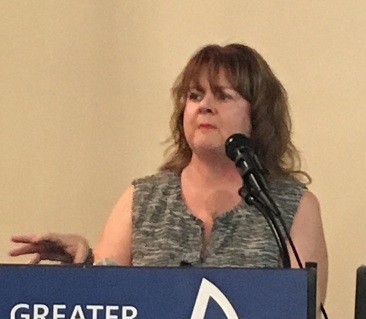 Midgi Moore, Owner and Chief Eating Officer for Juneau Food Tours and Alaska Culinary Experiences, was the guest speaker at the weekly Chamber of Commerce luncheon. (Photo by Charles Murphy)

Juneau, Alaska (KINY) - Culinary tourism is the act of traveling for a taste of a place you are visiting.

Midgi Moore, Owner and Chief Eating Officer for Juneau Food Tours and Alaska Culinary Experiences, was the guest speaker at the weekly Chamber of Commerce luncheon.

Moore started a blog after moving to Juneau in 2009.  She had inherited a number of recipes from her grandmother.  It started with a coconut cake for Christmas.  She wrote a weekly column for Capital City Weekly for six years writing about food.

Every person that works at the business must be a year-round Juneau resident.

She hosts travel writers from around the world in Juneau to promote our growing food industry.

The Washington Times, the Washington Post, London Times, Chicago Tribune, and the New York Times are among the newspapers that have written stories about Juneau and her food tour.

She noted the national coverage has increased tourism.  She noted it impacts local restaurants and the workers.  "It is exciting for us to have a very different and compelling story to tell about Alaska."

Among the celebrity TV shows she helped bring to Juneau were Uncharted on National Geographic that features chef Gordon Ramsay.  Another was Diners, Drive-ins and Dives with host Guy Fieri.

She plans to rebrand the business as Alaska Culinary experiences next year.  Part of the plan is a statewide food tour beginning in Juneau with stops in Anchorage and Talkeetna.  It includes a farm tour and other excursions.

In other events; Nominations are now being accepted for the Life Time Achievement and Citizen of the Year awards.  The annual Chamber Awards banquet is scheduled for October 26 at Centennial Hall.