Juneau community gathers to support and raise funds for Ukraine 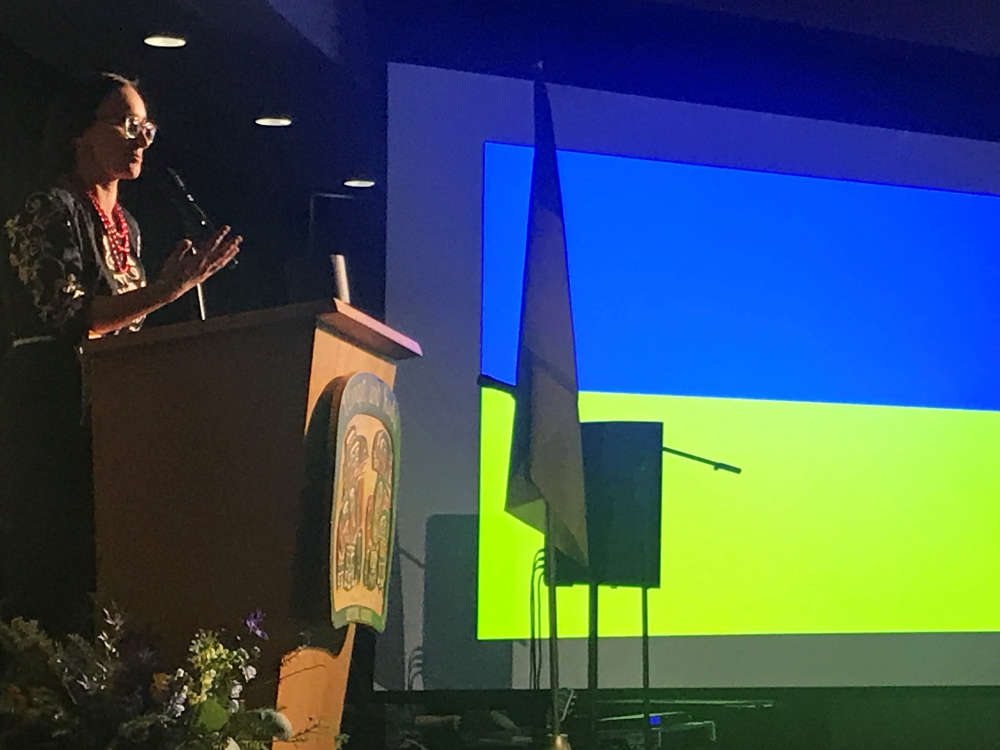 Olena Zyuba speaking to attendees at the Elizabeth Peratrovich Hall during a fundraiser for Ukraine. (Kevin Allen / KINY)

Juneau, Alaska (KINY) - The turnout to a Ukrainian fundraiser, held Friday evening in Juneau, exceeded the expectations of organizers.

Organizers sold tickets to enter and held a silent auction. Organizers said the proceeds will go to UNICEF to provide humanitarian relief to the war-torn nation.

Attendees were served a number of Ukrainian dishes such as Borshch, Varenuky, Golubtsi, and Pampushki. Lead Organizer Olena Zyuba said while addressing attendees.

"I just wanted to do something and to be a mom being really far from my country, I just wanted to do something. So I decided I can cook food and a lot of food, and I will try to sell this food," she said. "I just think that it's so wrong that what's going on right now, it should not be happening. People should not be sleeping in a bomb shelter, and their root cellars. I have friends and family members that have been sleeping in the bomb shelters for four weeks with their kids and their families not knowing what's going to happen tomorrow, and it's really devastating."

News of the North spoke with Zyuba during the event. She said the event came together in just two weeks.

"I felt really focused, my idea was really clear, and I just learned how to execute it," she said. "I'm just so thankful that I was able to do this and not feeling helpless and just be depressed from watching the news, and feeling that as a little human this really far, you couldn't do anything, but you actually can."

Juneau Representative Sara Hannan and Anchorage Representative David Nelson also addressed the crowd and spoke on the bipartisan support in the legislature for Ukraine.

"Just a month ago, when this invasion started, we had to end all politics and have a unified message of what Alaska was going to do, even if it was a small impact," Representative Nelson said. "So across the political spectrum me and Representative Fields sent a letter to the Alaska Permanent Fund Corporation, asking immediate divestment from Russian assets because Alaskan dollars should not be going to fuel this war currently going on."

"But there was still more that we could do. We had a sense of the house that was gladly accepted by not only representative Hannan but also signed on by an overwhelming majority of the Alaska House of Representatives, showing our solidarity with the Ukrainian people, and the end for this unjustified and totalitarian war that is currently ongoing," he added.

The event was put on at the Elizabeth Peratrovich Hall. Tlingit & Haida, the Juneau World Affairs Council, a number of Alaskan businesses, organizations, and individuals supported the event.