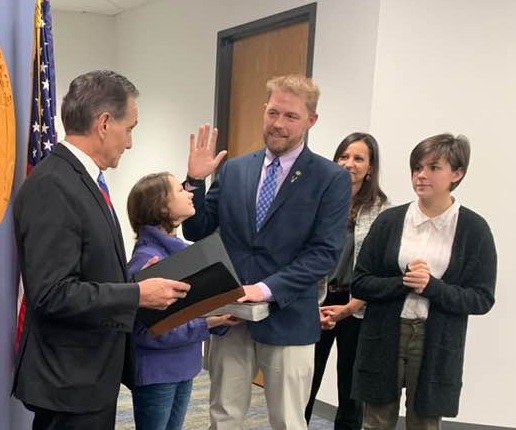 Anchorage, Alaska (KINY) - Former Rep. Johsua Revak has been confirmed to the District M seat in the Alaska State Senate.

Revak will hold the Senate seat pending a November 2020 election.

"I am deeply humbled by this opportunity to continue serving my neighbors in District M and the State of Alaska in the State Senate," Revak said in a statement. "I want to thank the Governor for nominating me. I appreciate the time my new Senate colleagues took in considering my confirmation and I look forward to working with them."

"Josh has dedicated his life to service of our nation and state - he joined the U.S. Army shortly after 9-11 and served tours of duty in Iraq where he was severely wounded," he said in a statement. "He has worked for members of our Congressional Delegation on veterans issues, and he has proudly served the constituents of House District 25. I have all the confidence that Senator Revak will serve his district in the same fashion he has served our country and state."

Senate President Cathy Giessel, R-Anchorage, said Revak will be a good colleague. "Josh knows how to bring folks together, from across the political spectrum, and find real solutions that work for Alaska," she said in a statement.

The law states that the person nominated by the governor shall be a member of the same political party as the predecessor.

Traditionally, political parties send a list of nominees to the governor when a vacancy is created. Shaw was on that original list. Revak was not.

Revak's appointment to the seat will create an opening in the House for which an appointment will need to be made.