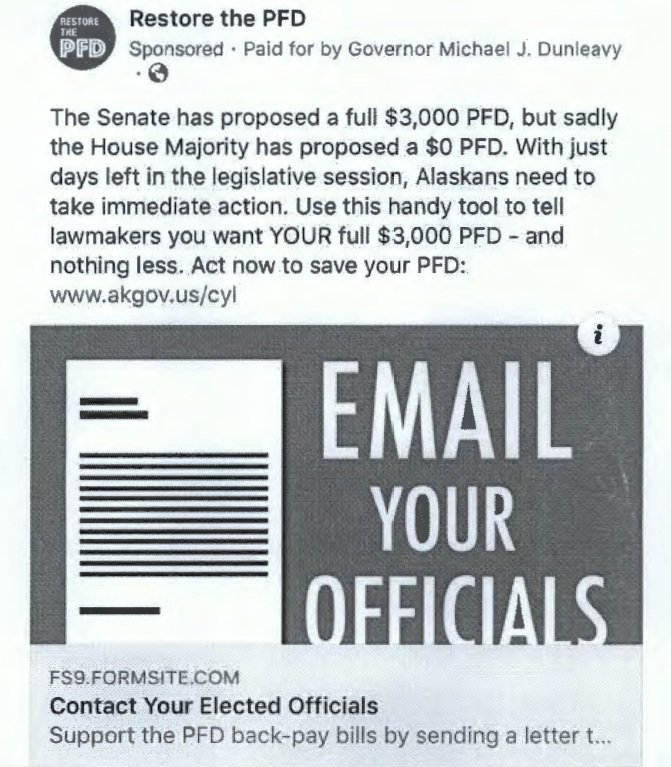 Juneau, Alaska (KINY) - An inquiry about whether the governor's office violated ethics statutes with a recent Facebook advertisement has elicited a response from Alaska Legislative Affairs Agency.

Representative Zack Fields recently requested of the LAA to determine whether Gov. Mike Dunleavy's recent posting of a paid advertisement on Facebook violates ethics law regarding the use of public funds for paid advertising for partisan political purposes.

According to a memo from LAA, the applicable ethics law is the Executive Branch Ethics Act. In the memo, Legislative Counsel Daniel Wayne writes that a public officer may not use or authorize the use of state funds, facilities, equipment, services, or another government asset or resource for partisan political purposes.

The top of the ad on Facebook carried the phrase "Sponsored - Paid for by Governor Michael J. Dunleavy."

Wayne states this suggests that state funds were used to pay for the ad.

"If so, two questions remain: (1) is the ad "for partisan political purposes;" and, (2) does the ad have "the intent to
benefit the public interest at large through the normal performance of official duties," Wayne writes.

As to whether the ad for a partisan political purpose, Wayne states that the body of the ad reads, "The Senate has proposed a full $ 3,000 PFD, but sadly the House Majority has proposed a $0 PFD. With just days left in the legislative session, Alaskans need to take immediate action. Use this handy tool to tell lawmakers you want YOUR full $3,000 PFD - and nothing less. Act now to save your PFD: www.akgov.us/cyl4."

"Although 'political party or group' is not defined under [Alaska Statute], because the house majority is a caucus, the independent counsel and the personnel board may determine that it is a political group. When terms are undefined in statute, [Alaska Statute] directs that they be construed 'according to their common and approved usage.'"

Wayne concludes that the governor's office may have violated ethics laws.

"Based on the foregoing, if a complaint were filed against the governor related to the attached ad, the special counsel and the personnel board may determine that producing and paying for the ad constitutes a prohibited use of state funds by a public officer, under ... the Executive Branch Ethics Act."