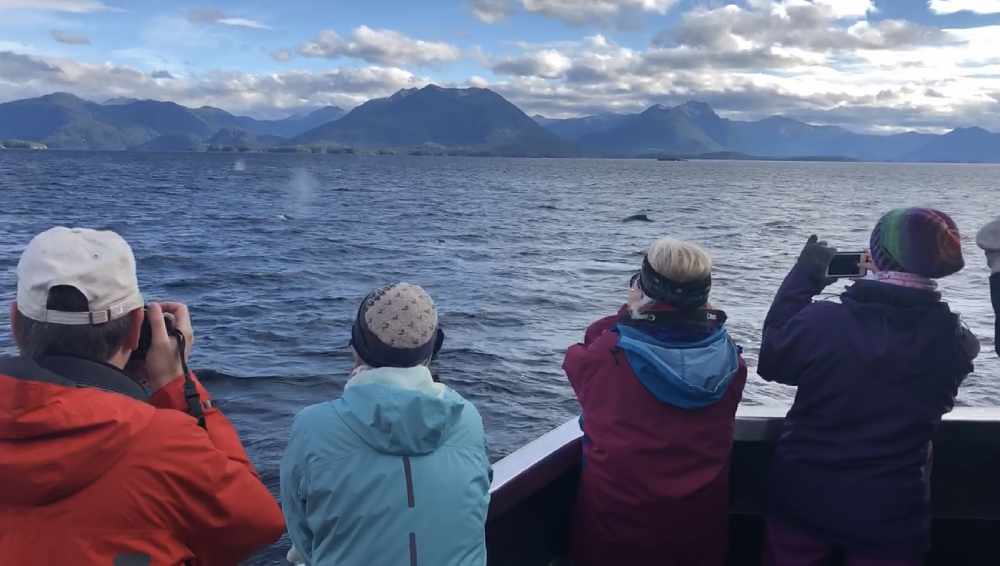 Sitka, Alaska (KINY) University of Alaska Southeast researchers, alumni and supporters of the university were in search of humpback whales during a recent tour.

In just minutes, in Sitka Sound within clear view of Mt. Edgecumbe, whale spouts came into view, shooting up along the horizon. Eager watchers stepped up to the rail on the leeward side, cameras and phones in hand, quickly realizing that the spouts circled the vessel, too many to count. Humpbacks lounged on the surface of the water, rolling gently in the waves and occasionally raising their flukes as the captain cut the engine and let passengers observe quietly for the next 45 minutes.

Straley, who has been documenting whale behavior for the past 40 years, occasionally broke the silence onboard to describe the behavior on the feeding ground and share some observations from her research.

“The whales in Sitka Sound are getting ready to migrate to the breeding ground.  About 94% of whales who feed in Southeast Alaska and Northern British Columbia go to Hawaii.  The remaining 6% go Mexico. But she notes that they are noticing an increasing trend of humpbacks lingering in Sitka Sound later in the winter.

The researchers noted that they are seeing fewer calves, skinnier whales and more whales staying longer into winter feeding on herring, partially migrating and returning or possibly not migrating at all.

“We are concerned that the offshore warm water anomaly known as “the blob” and other ocean conditions have had a negative impact on humpback whale prey.” added Chenoweth, noting that the longer the whales stay in Alaska the more they will feed upon prey like herring, which are the primary food available in the winter.

When asked if they believe the longer wintering patterns might be linked to a decline in humpback whale sightings in Hawaii, both researchers were cautious about drawing direct conclusions since whales arriving in Hawaii include a broader population of those traveling from other feeding areas in the North Pacific.

But what they are seeing in Sitka could be clues about the rest of the population.

Straley says if humpback whale numbers are declining in Hawaii it is an indication of a broader scope of the issues they see in Sitka. It may mean multiple feeding areas are having changes in prey available for humpback whales.

This would be consistent with what they observe. They believe a lack of energy resources - or food - necessary to prepare for the month-long journey to Hawaiian waters could be a cause for some whales to stay longer or not migrate at all. It is something they hope to study more if they can find more funding to expand their research.

“These are the things that we think we are seeing and we are concerned about” says Chenoweth. “We would like to quantify the changes in the numbers and distribution of whales present in winter and try to get at the cause and effect. But we need more monitoring funds. This means we need gas in the boat, time to be out there later in the season and, more technicians to manage the data and document the whales and more time on the water.”

How do they study humpback whales?

“In this case to find out who is in Sitka Sound in the winter we need to monitor these whales with a concentrated effort on identifying individuals throughout the fall and winter,” Straley says. “Without photographs, we will not know who is present for the whole winter or who left early and who stayed late or who arrived from the breeding grounds early.  A whale is identified by the black and white pattern on the underside of the flukes or tail.  It takes about 30 days for a migratory transit hence two observations on the same whale are needed within 60 days to determine whether it didn’t have time to migrate all the way to the breeding ground but stayed in Alaska or went part way.”

One of the big concerns about having the whales linger in Sitka Sound is the impact on herring.  Herring are integral to a One-Health perspective, that is the integration of humans, environment and research.

“If a lot of whales skip the migration, that is a huge pressure on sustaining herring populations.” she says.

A private fund, the UAS Whale Research and Education Support Fund, has been established through the University of Alaska Southeast. Donations to help whale research and get more technicians on the water can be made here: https://appFe.mobilecause.com/form/65d25A