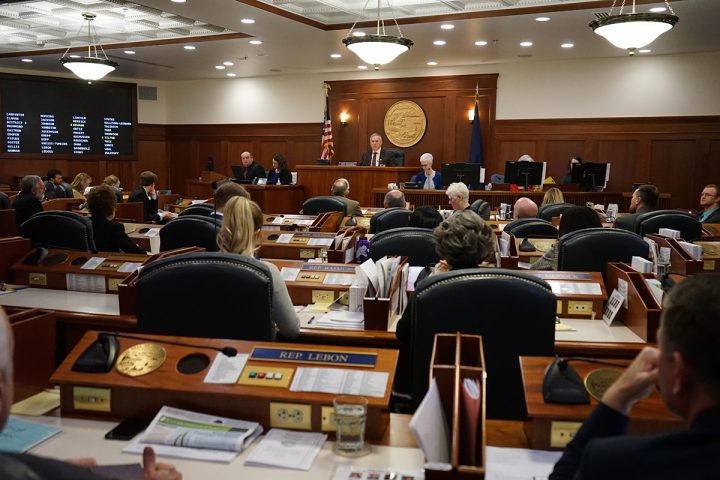 The Alaska House of Representatives in session.

Juneau, Alaska (AP) - House lawmakers plan to turn their attention to the check residents receive from Alaska's Permanent Fund and begin reviewing proposals that would change how the PFD is calculated.

Whether any new formula can be agreed upon is unclear. The debate over the size of the dividend has dominated recent legislative sessions.

Many lawmakers believe the existing formula, last used in 2015, is unsustainable and at odds with a law seeking to limit withdrawals from Permanent Fund earnings for government costs and dividends. The state in 2018 began using earnings to help pay for government.

Reps. Chuck Kopp and Jennifer Johnston, leaders of the House Rules Committee, on Wednesday proposed legislation that would dedicate 80% of the set withdrawal from earnings for government and 20% for dividends. Kopp called it a path forward that would invite discussion.

Johnston, who is also co-chair of the House Finance Committee, said it would equate to a dividend of around $900 this year. She said that bill and other dividend proposals would be reviewed by the finance committee starting next week.

Some lawmakers, such as Rep. Kelly Merrick, argue the existing formula should be followed until it's changed. Gov. Mike Dunleavy has proposed a dividend under that formula for this year, which the Legislative Finance Division says would be about $3,100.

Dunleavy has said Alaskans should be able to weigh in on any dividend changes.

Merrick, like Johnston, served on a working group tasked with looking at the Permanent Fund and dividends. The group made no recommendation on a dividend calculation but said a majority of its members agreed with sticking to draw limits, like that set in 2018.

Merrick, also a finance committee member, said in looking at the dividend formula there needs to be a discussion of a “reasonable” spending cap.

“I think people's minds are open and they want to see this issue resolved so that it's not something that divides the legislature year after year,” she said of the dividend.