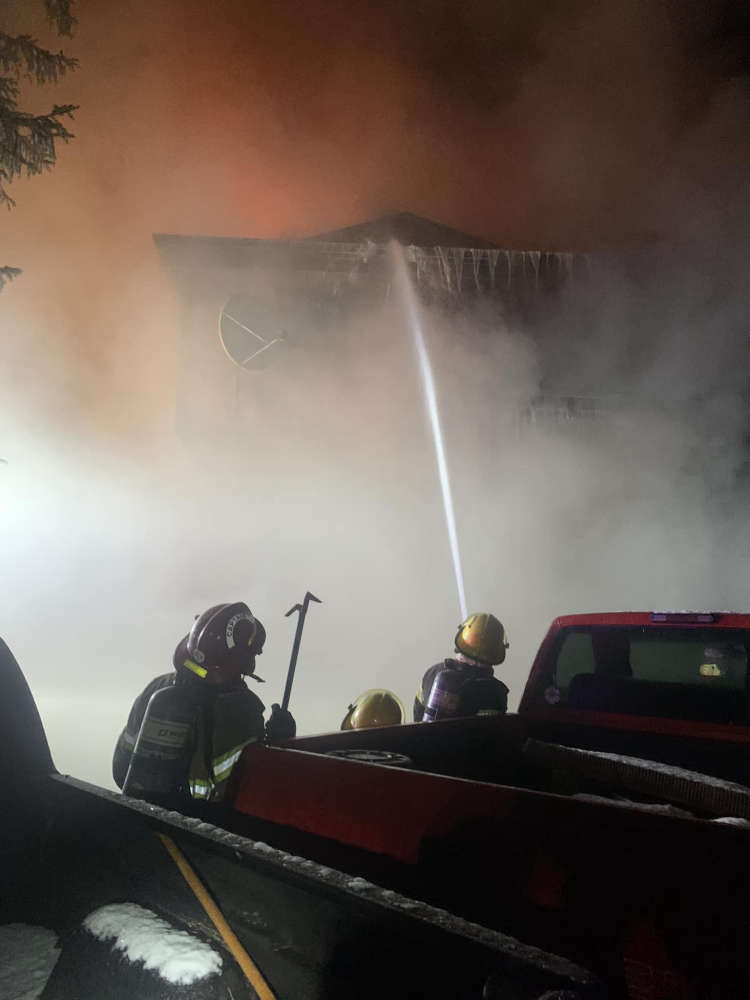 Update 11/28: One resident sustained a laceration to their hand and was treated on site. Two firefighters also sustained minor injuries and were released on site as well.

The structure involved was a rental unit with two separate rental units. The building construction made extinguishing the fire extremely difficult as there were multiple void spaces.

CCFR said the structure is a total loss as it sustained fire, smoke and water damage throughout. The tenants were able to salvage many priceless antiques and family heirlooms.

The investigation has determined that the fire started on the second floor where heavy damage occurred and moderate fire damage on the third floor. The actual cause is undetermined at this time as the investigation is ongoing.

Original 11/27: At 5:30 p.m. the fire department was on the scene of a structure fire on Pederson Street near Engineers Cutoff Road.

Chief Travis Mead was in command.

"At about 5:30 pm yesterday we were toned out to a house fire, residential structure fire on Pederson. We responded there and on arrival, we encountered a home three-story residential home that had had a fire on what we call the Charlie Delta corner. The fire had already vetted out one of the exterior windows and was making its way up the site at home. We had at least two fire engines, multiple ambulances, and multiple volunteer staff responding to this location. The way that the road is set up, there's a long dirt road that has a hydrant across Engineers Cut Off and there's another hydrant down the road aways. And so access, getting all that apparatus and a water supply in there was a little bit challenging, I had to definitely coordinate on how we did that. And to be able to leave access for apparatus to get in. Crews encountered it, we started fighting fire. I arrived about a minute behind the first arriving engine. And I assumed command. And we made an attempt to the Charlie side on the second floor to fight fire, actively venting fire out of the windows and door. Additional crews showed up, I was able to assign another team to go to the third floor. There's more than one family living in this structure, the second floor was an apartment and the third floor was a living space as well. So a second team went to the third to try and make an interior attack through that way. Due to some reports of structural concerns, I declared a defensive operation which means I pulled everyone out of the structure. And we fought fire from a defensive position, which essentially means exterior locations. When we did that, that made it challenging to be able to access all areas of this fire."

"When you go defensive, it means you're exterior, you're fighting fire from a safer location than being interior. It still means we're aggressively fighting fire, it just makes it more challenging because then you start to do things like working on ladders, or you're just raining that water in strategic locations. We struggled for a while to be able to get the fire under control because it just would go from one side of the building to the other. And so really it was challenging for a long time. We did finally get control of it. And we were able to very carefully put a team back into the interior once we were able to control the environment more and we were able to rule out any structural concerns at that point. We were able to start overhauling from the interior positions both on the second floor and third floor and also gain access to the attic space. The unique construction of the home allowed for multiple void spaces where we were able to locate fire. It just took a very long time to be able to deal with this fire, out all the way."

At 10:09 p.m., teams were still working through the home, extinguishing flares in the ceiling.

At 10:38 p.m., teams continued to find and extinguish fire deep inside walls.

The Fire Marshall was on the scene and he stayed until after the operation was cleared until early morning to determine the cause of the fire which is still under investigation.

Mead thanked the fire department for their work.

"It was a long fire for a residential fire. That was one of the longer ones that I've participated in. Honestly, it could not have been done as well as it was without the help of our off-duty, and especially our volunteer staff that we have. They were just rockstars throughout this, throughout that whole operation, and huge appreciation for them. If the community was to ever really want to give thanks, it really is to the people that work for the department in both career and volunteer."