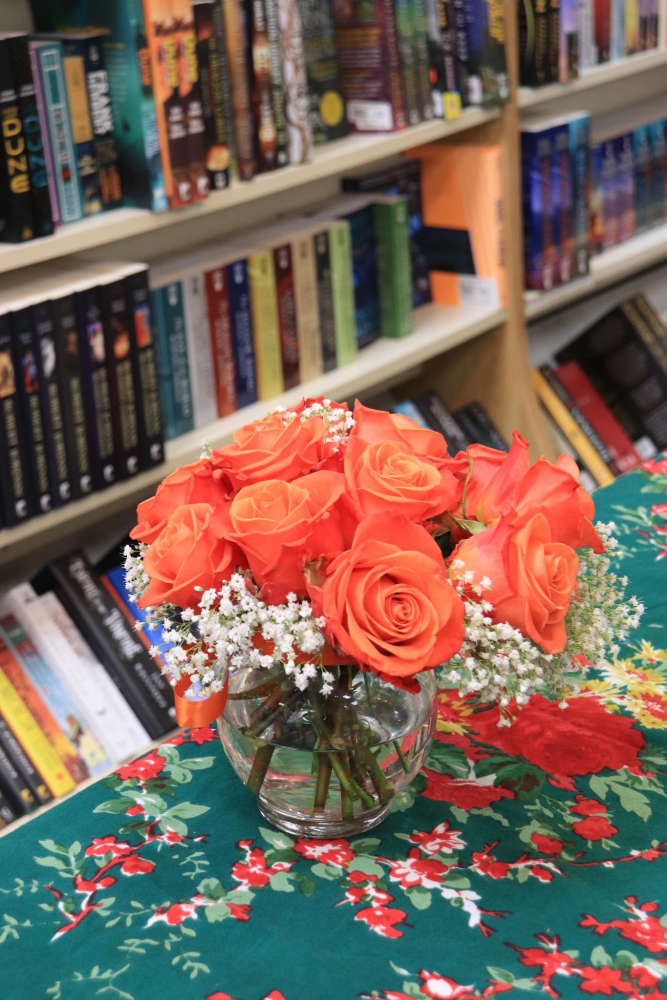 Lijó Serán is from Spain and has lived in Juneau since the early 2000s.

On Saturday the public was again invited for the book signing, but at their valley location in the Nugget Mall.

A guest book was also provided to welcome Lijó Serán as the new owner.

Lijó Serán talked about how it felt being the new owner of Hearthside Books in Juneau.

"Personally for me, it's very fulfilling. I worked for public libraries for a number of years and I loved it. Then I moved to the legislative reference library. That is a very interesting job. We do all kinds of research, but I was missing people. So I think that this is what makes me very, very happy to be back in front of the public. It feels like a big responsibility, very community-centered city. And this is a very central part of the Juneau community. Hearthside is not just the bookstore. Hearthside is the long-running bookstore here in Juneau and everybody knows it and everybody is really happy that it's still going on. So it feels like a big responsibility."

Lijó Serán talked about the events Friday and Saturday.

"We had Susi Gregg-Fowler and Jim Fowler signing their books, latest book, but also some of the others that they had. They did a great job. They were so gracious. She writes and he illustrates and they are an amazing team. Beautiful art. We had some food and drinks. We also had a jazz ensemble, Luke Weld and Kristin Larson played. Luke was on piano, Kristin was on stand-up bass. They were amazing."

Lijó Serán shared a future goal for Hearthside to be a place of language resources for Juneau's Latino community.

Part of her goal is to provide a community conversation language group, most likely planned after the New Year passes. She hopes to bring books written in Spanish into Hearthside.

"One of the things that I have been wanting to do since very early, being here in Juneau, has been to make Spanish language materials more easily available for people. Because we do have a Latino community. And we have a lot of people that are trying to learn Spanish or not lose their Spanish. Part of the bookstore that will be more related to my personality will have to do with making those kinds of books in Spanish, well curated and not just classics."

Katrina Woolford, Website/Events/Marketing for Hearthside, talked about their next upcoming event.

"We have an annual holiday event and it coincides with the release of the Pacific Northwest Booksellers Association Catalog. Catalog goes out to people in the community and we have copies here. And it's all kinds of really well-chosen book gifts for Christmas. We discount those titles during that day. And then we're going to have live music and we'll have author signings. At the mall store on November 19th. For the book part, those discounts happen all day."

Woolford said to follow Hearthside's Facebook for an update on a specific time release for the holiday party.