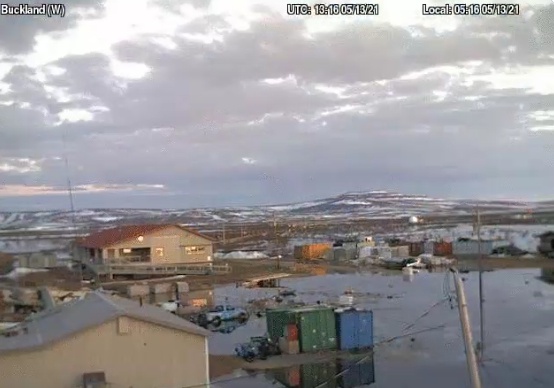 Buckland, Alaska (KINY) - A disaster has been declared for the Northwest Alaska City of Buckland and Native Village of Buckland after an ice jam on the Buckland River caused severe flooding in the city.

Buckland and the Northwest Arctic Borough had already declared disasters due to flooding that began May 12th.

The flooding brought more than five feet of water and river ice, which inundated homes and forced evacuations.

A boil water notice is in effect because of impacts to the water treatment plant.

Director of the Division of Homeland Security and Emergency Management, Bryan Fisher, said the community had a Small Community Emergency Response Plan and had enacted it immediately.

He added by saying "The leadership and residents of Buckland should be commended for their preparedness, quick actions, and resilience."

Currently, the water level has dropped in the community.

Responders are beginning a more thorough damage assessment which will inform Homeland Security and Emergency Management to determine a path for recovery.