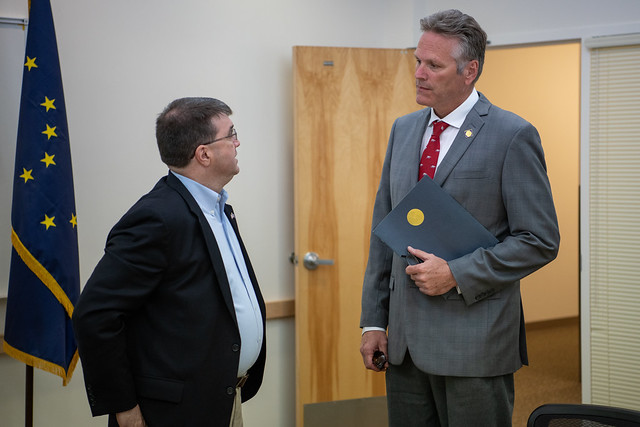 Governor Dunleavy and Secretary Wilkie held a productive meeting in Palmer, discussing ways the VA can expand and improve the services they offer to veterans across Alaska, as well as how the federal and state Veterans Affairs agencies can partner together to best serve Alaska’s veterans in the nation’s largest state.

“It was great to welcome Secretary Wilkie to Alaska as he travels throughout our state to survey the services the VA offers to Alaska’s veterans,” said Governor Michael J. Dunleavy. “Alaska is home to more veterans per capita than any other state in the country, and our veteran population is steadily growing. I am proud of the work we do with the VA and look forward to increasing access to VA services across Alaska, both urban and rural, in the coming months.”

“My appreciation to Governor Dunleavy for our discussion on how to further support our Veterans in the state of Alaska. I shared with him that Alaska is the future when it comes to the transformation of Veterans Affairs. That is why this is my second visit to Alaska during my short 11 months as Secretary,” said US Department of Veterans Affairs Secretary Robert Wilkie. “The Veterans population is expanding and it is one of the reasons why we are testing electronic health care records as well as taking the time to listen and learn from Veterans and the state regarding how best to meet the needs of our rural veterans.”

Secretary Wilkie is currently on a multi-day trip to Alaska that includes stops in Anchorage, the Mat-Su Valley, and Fairbanks.