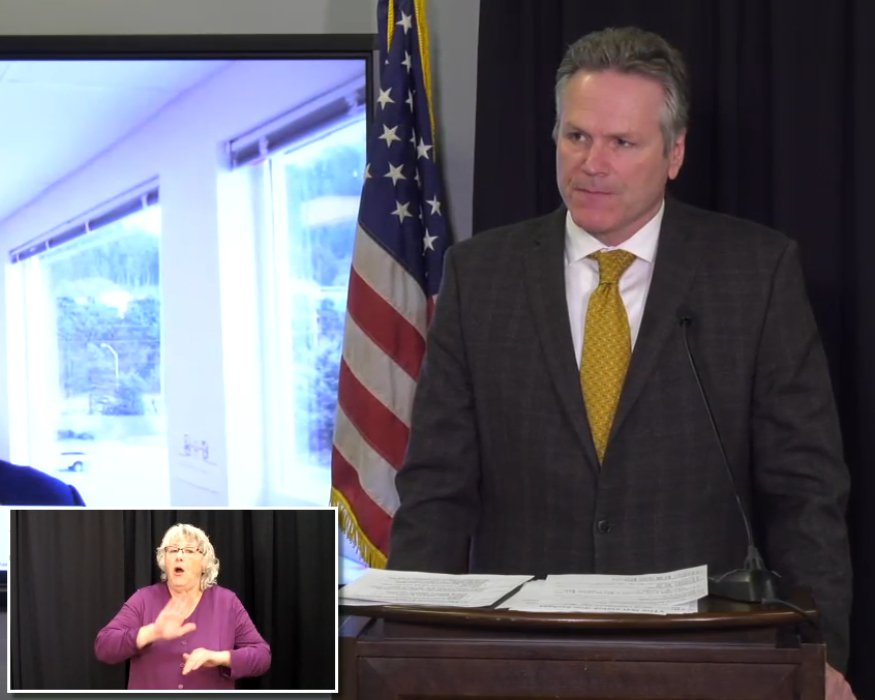 Juneau, Alaska (AP) - Gov. Mike Dunleavy announced wide-ranging budget vetoes Tuesday amid a collapse in oil prices, citing expectations that many of the larger cuts, including aid for schools and local governments, would be offset through the use of federal funds tied to COVID-19 relief.

Some legislators questioned whether the money can be used that way.

“There is no guarantee that the federal government will pick up the tab. This approach is incredibly troubling to me,” House Speaker Bryce Edgmon, a Dillingham independent, said in a statement.

Edgmon said lawmakers need to hear more about discussions the Dunleavy administration has had with the federal government about the use of funds from the stimulus package.

Dunleavy, a Republican, told reporters that his administration looked over details of the federal package and talked with people in Washington. He didn't say who. “And it's our belief that we can do what we say we’re going to be able to do,” he said.

The Dunleavy administration said seven items — including school bond debt reimbursement, community assistance and $30 million in extra funds for K-12 schools — that would have been funded with state money instead would be funded through the federal coronavirus relief package.

Administration documents show other vetoes include $15.5 million for vessel operations for Alaska's ferry system. Dunleavy said there is money in the budget for repairs to ferries and additional service time. He cut $12.5 million from the University of Alaska, giving the system a $25 million cut in line with an agreement he and university leaders announced last year.

There were cuts in funding for public broadcasting and $334,700 for the appellate courts. The administration was sued over a similar court veto last year. It said at the time that the amount was commensurate to state funding for abortions.

In 2019, Alaska’s Supreme Court struck down as unconstitutional a state law and regulation seeking to define what constitutes medically necessary abortions for Medicaid funding.

Dunleavy also vetoed about $30 million in state and federal funds for Medicaid as part of a supplemental budget. The level of cuts made to Medicaid last year was not realized, resulting in a large supplemental spending request.

However, the administration, in backup documents, said the health department is on track to meet projections and does not need the money Dunleavy vetoed. State health Commissioner Adam Crum on Tuesday cited an increase in the federal matching rates as a factor.

And he vetoed the proposed transfer of about $1.1 billion from the earnings of the state's oil-wealth fund, the Alaska Permanent Fund, to the fund's constitutionally protected principal.

The state, which has long relied on oil revenue, has been using earnings to help pay for government. It also has been drawing-down on savings to help fill a persistent deficit. North Slope oil prices since mid-March have been below $30 a barrel.

Rep. DeLena Johnson, a leader in the House Republican minority, in a statement, said Dunleavy made “hard choices at a time when hard choices are required.”

The budget includes a roughly $1,000 Permanent Fund dividend to residents, funded in part with savings. In a letter to legislative leaders, Dunleavy said any amount short of a dividend calculated under a longstanding formula “is a tax on Alaskans.”

The formula hasn't been followed in recent years. If it were, this year's dividend would be about $3,100, the Legislative Finance Division has estimated.

Budget cuts proposed by Dunleavy last year, and subsequent vetoes, set off a furor that helped feed a still-active recall effort against him and included drawn-out fights with the Legislature.

The Legislature currently is on hiatus after passing a budget package early amid coronavirus concerns.

“He took advantage of the situation and the moment,” said Senate Minority Leader Tom Begich, an Anchorage Democrat. He saw the vetoes announced Tuesday as a “slap in the face."

Among the line-item vetoes are: