Free to good home: One of Alaska's weekly newspapers 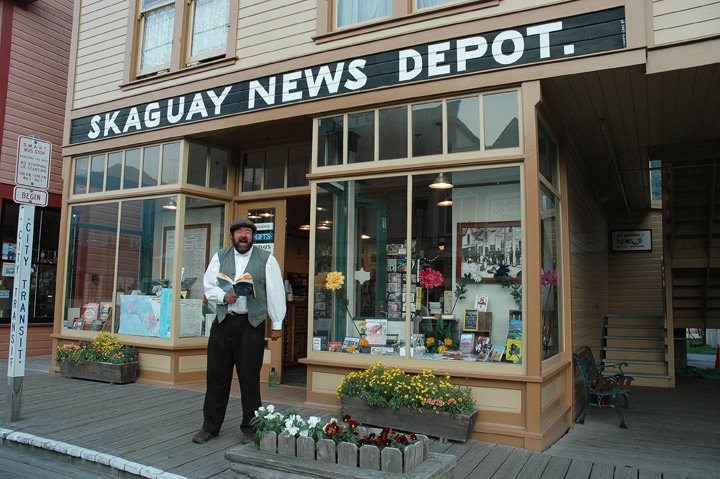 Skagway, Alaska (AP) - Publisher Larry Persily is willing to give away The Skagway News to the right person or couple who are willing to move to Skagway.

Persily has been editing the newspaper he purchased in April remotely from Anchorage, which is 500 miles west of Skagway, near the top of the Alaska Panhandle.

“The only way this paper has a long-term future, and anything that I’ve ever seen that works with small-town weeklies or bi-weeklies is where the small town editor owns, lives and are in the community,” he said. “And that’s what this needs.”

It’s a two-person shop, with an editor and a business person on site. The editor gave notice, prompting Persily, a Chicago transplant who has a long history in Alaska journalism, to look for another solution.

He declined to say what he paid for the newspaper, but he said it was more than a fully decked-out SUV but less than six figures.

The paper has a circulation of about 500, pretty good for a town with a population of fewer than 1,000 people, but the population swells with young people in the summer working tourism jobs.

The newspaper also benefits greatly from the tourist trade.

With the help of a robust and advertising-filled visitors guide that is handed out to the 1 million or so cruise ship passengers that visit Skagway every summer, the newspaper can pay the owners a salary, but they probably also can’t cover a mortgage.

Persily said the new owners need to stem the circulation decline, turn online readers into paid subscribers with the help of a paywall and get even more advertising into the visitor’s guide.

“I think this is the best way to do it, is to find the right person or couple,” he said.

Persily will set you up to “run the paper and hopefully you and Skagway will live happily ever after. And that’s what’s best.”

Weekly newspapers change hands with some amount of regularity, said Rick Edmonds, the media business analyst for the Poynter Institute, a nonprofit school for journalists.

Typically, they are put for sale, and the best-case scenario is they are purchased. If not, the owners consider either closing the newspaper or in some cases, giving it away.

Edmonds said gifting a newspaper is not unheard of in the industry.

Persily said he has not considered selling the Skagway News. “You can’t sell a paper that doesn’t make money,” he said.

It has been a tough 15-year stretch for newspapers because of online pressures and the recession of a decade ago, which led to the closure of many Main Street businesses that traditionally bought newspaper advertising, according to research by Penny Abernathy, the Knight Chair in Journalism and Digital Media Economics professor at the University of North Carolina.

Since 2004, about a fourth of them, or 2,100 newspapers, in the U.S, have closed, including 70 dailies. Abernathy’s research found that it has left 200 counties in the U.S., with populations ranging from 600 to 1 million, without a newspaper.

Jeff Brady started the Skagway News in 1978 and owned it until 2015. He encouraged his friend Persily to buy the paper earlier this year from other owners.

“I certainly hope it carries on, and the town certainly doesn’t want it to go away,” he said.

Brady still lives in Skagway and is more than willing to help out the new owners of the paper — to a point. “I just don’t want to be covering assembly meetings till midnight anymore,” he joked.

Persily is adamant that the person who ultimately gets the newspaper must cover all things Skagway.

He said one person asked him if there would be time to do investigative reporting of statewide and national interest while also running the paper.

“No, you’re going to cover volleyball games, the assembly, bake sales, the remodel of the kitchen at the school, road conditions in the winter,” Persily said. “It is a small-town life. Don’t think this is going to be your step to investigative prominence reporting.”

Persily said his first preference is to give the newspaper to someone from Alaska “so I don’t have to explain to them why the ferry system is messed up or why global warming is affecting salmon returns with low water in the streams or how school funding is a political issue here.”

If Alaskans aren’t an option, his selection process will be somewhat arbitrary. However, be forewarned: You’re out if you misspell “Skagway” or “Persily” in your email to him at paper@alaskan.com.

His goal is to have new owners in place by January. If he can’t find anyone, he’ll need to fill the editor’s position while he continues to find new owners.