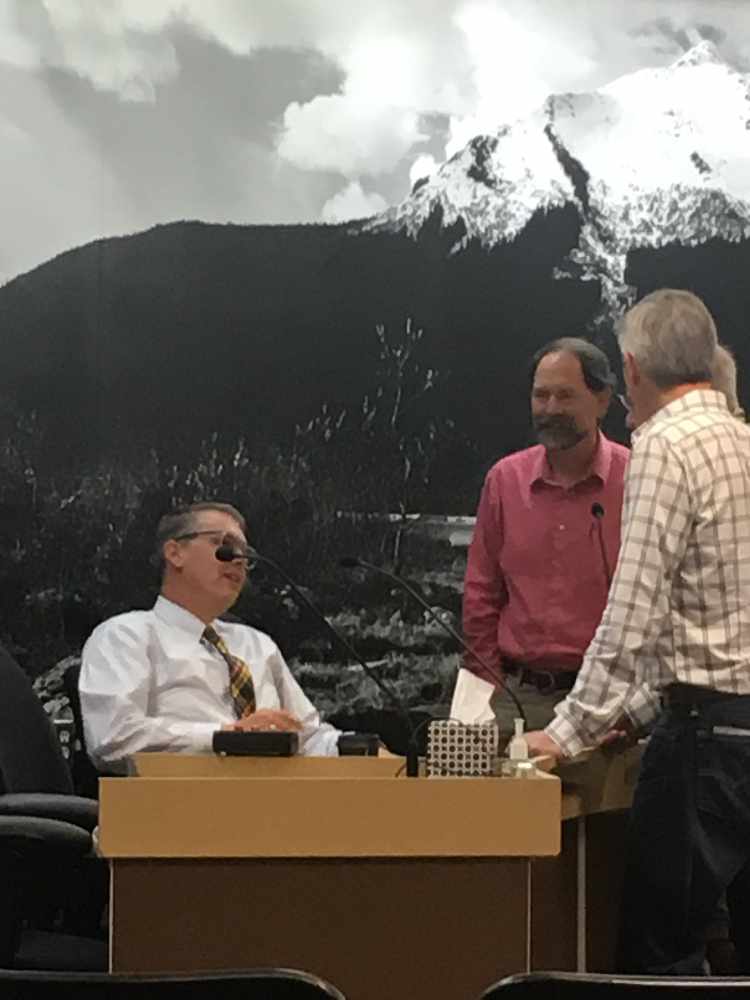 City Manager Rorie Watt during a break in Assemby deliberations

Juneau, Alaska (KINY) - The Juneau Assembly takes up a resolution during a special meeting Monday evening in support of the University of Alaska Southeast.

It's been proposed that UAS be merged into one of the campuses in Anchorage or Fairbanks.

The quarantine mandate was scheduled to expire Tuesday, but the Governor Friday evening extended it until Friday, June 5.

The special meeting agenda was amended Sunday to include an emergency ordinance ordering people to quarantine when traveling to Juneau from another state or country.

The ordinance requires local businesses bringing workers to Juneau from outside the state to submit a plan outlining how they will avoid the spread of COVID-19 and not endanger the lives of the communities in which they operate.  Under terms of the document, plans must be submitted by 3 p.m. June 8.

The ordinance would take effect June 4 and remain in effect through June 18.

The body will receive a COVID 19 update during a Committee of the Whole meeting that will follow the special meeting.

The use of federal CARES Act funding is one topic of discussion.   The Assembly's Economic Stabilization Task Force is recommending a multi-phased approach to assisting local businesses.  City Manager Rorie Watt, in a memo to the Assembly, says the first phase calls for expending  $3.5 Million with subsequent phases increasing the amount to $12 Million

The special meeting is scheduled to convene at 6  p.m. followed by the Committee of the Whole.

The Lands and Resources Committee meets at 5 p.m.  Among the items on that agenda is a request for a communications tower at the end of Crazy Horse Drive and the renewal of a lease by the Montessori School of the Mayflower Building on Douglas.

Members will also listen to a staff report on a request by Alaska Legacy Partners requesting its release from the CBJ property located at 9390 Hurlock Avenue which at one time housed the operations of Juneau Youth Services.

The Assembly authorized the use of the property by the organization as a senior care facility in April of 2018.  Alaska Legacy Partners explained in a letter that the decision by the city and borough to purchase land at Vintage Park and offer an incentive package to Torrey Pines Development to develop a 90 bed assisted living facility there created what it termed "direct, subsidized competition" to their planned facility.

The letter also cited the COVID-19 pandemic for causing indefinite delays due to government mandates and massive uncertainty in equity and credit markets.

The Assembly is informed in a memo from the Lands and Resources Department that Alaska Legacy Partners is in good standing and has not defaulted on any terms and conditions in its agreement with the city and borough.  So the company is seeking permission to sell the property and remove the requirement to be used for senior care as it looks to recoup its investment costs.

The Public Works and Facilities Committee meets over the Noon hour.  Members will receive updates on the design for the renovation of Centennial Hall and the development of the Archipelago lot.