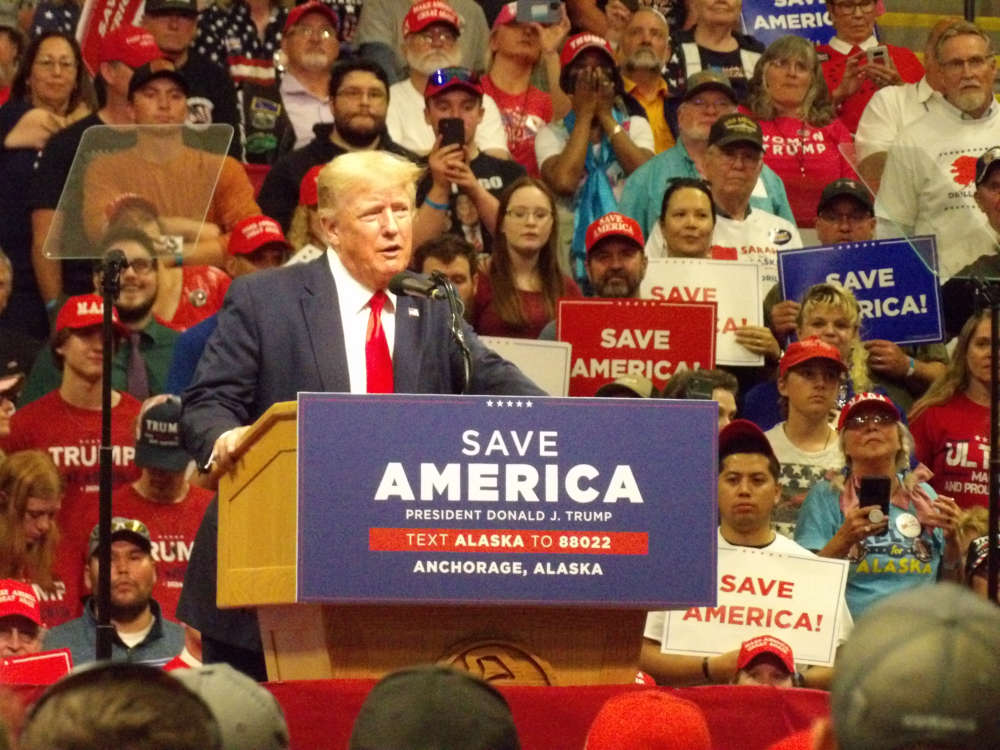 The rally was held at the Alaska Airlines Center, located on the campus of the University of Alaska Anchorage.

More than 5,000 supporters were in attendance, which Trump's organization, Save America PAC, says is a record for the state in terms of political rallies. An estimated 2,000 supporters were outside in the parking lot watching via a video link from the arena.

You can watch the rally here.

In addition to Trump, Palin, Tshibaka and My Pillow CEO Mike Lindell spoke to the crowd. 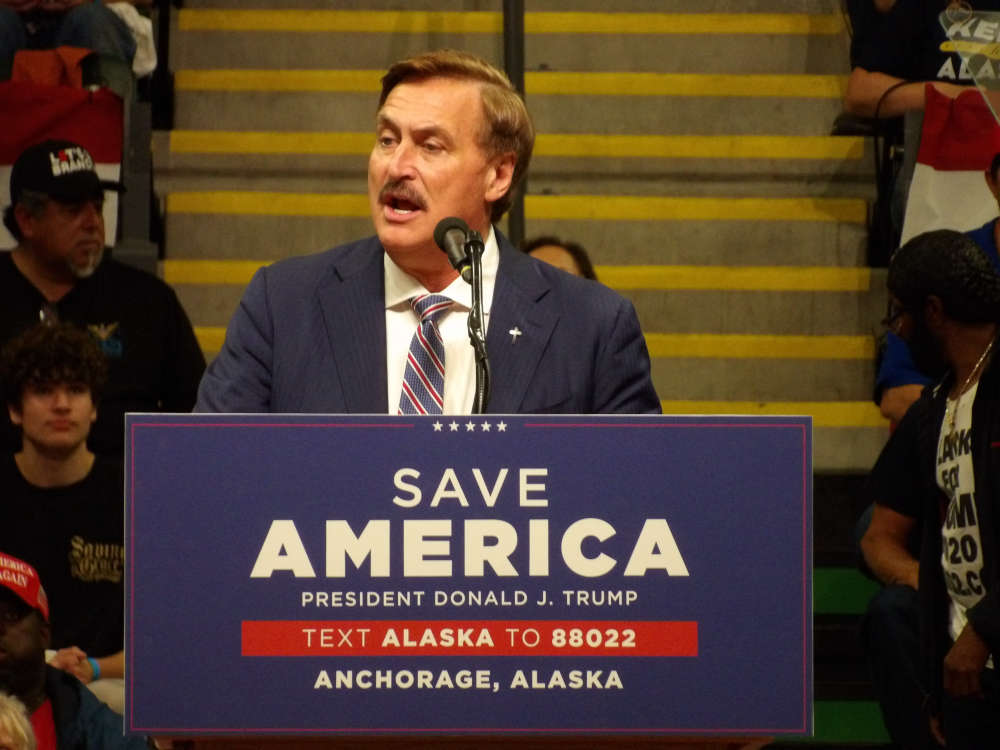 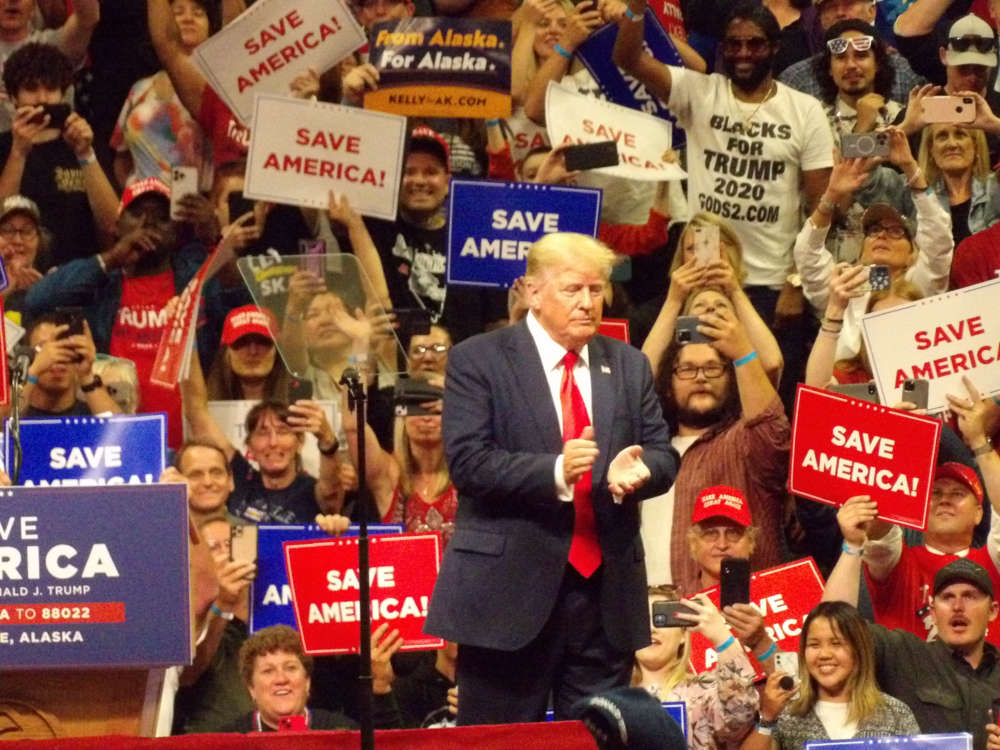 After taking the stage at just after 4:30 p.m., Trump wasted no time in appreciating the beauty of Alaska - and then calling current Sen. Lisa Murkowski, "lousy."

"I've heard for years is no place more beautiful, and I agree," Trump said. "I just saw some things that you don't see in normal places. I'll tell you this is not a normal place when you have a lousy Senator like Murkowski, but we're gonna do something about that, I'm here for two reasons, to support great candidates, and to fulfill my promise to Alaska, that I was going to come here." 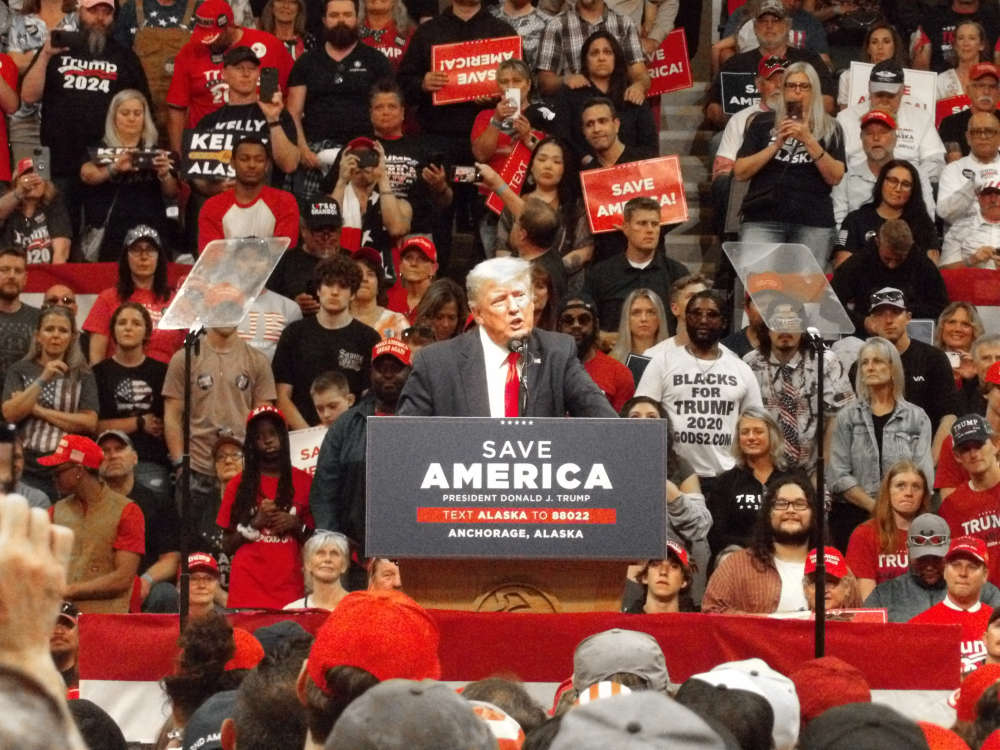 "Four months from now, the people of this state are going to reelect your terrific governor, Mike Dunleavy," Trump said. "He's a good man. He's been with me from the beginning."

Trump then said he rates Murkowski as one of the worst senators in the nation ... and then he endorsed both Tshibaka and Palin.

" I rate her number one bad, and we have a couple of real bad ones, but she's by far the worst," Trump said, adding, "But you're going to elect a wonderful woman, a conservative warrior, Kelly Tshibaka. Sarah, I'm here to say, I like you best. I know your opponents. And I like you way better. You're great Sarah, and I appreciate it. We're going to end crazy Nancy Pelosi's political career once and for all." 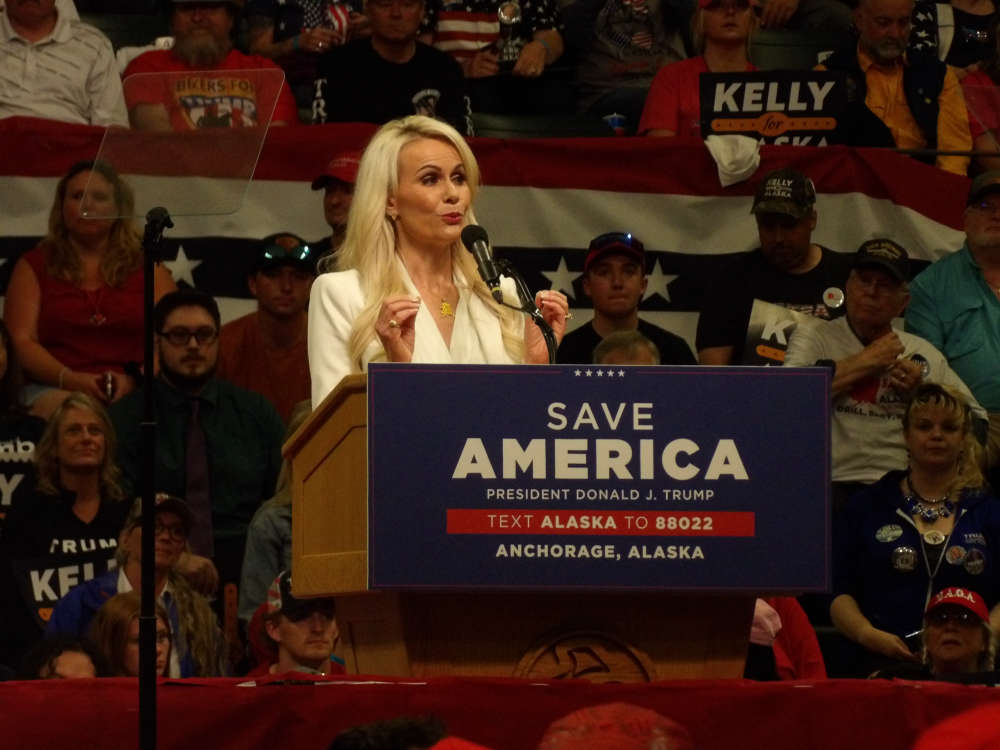 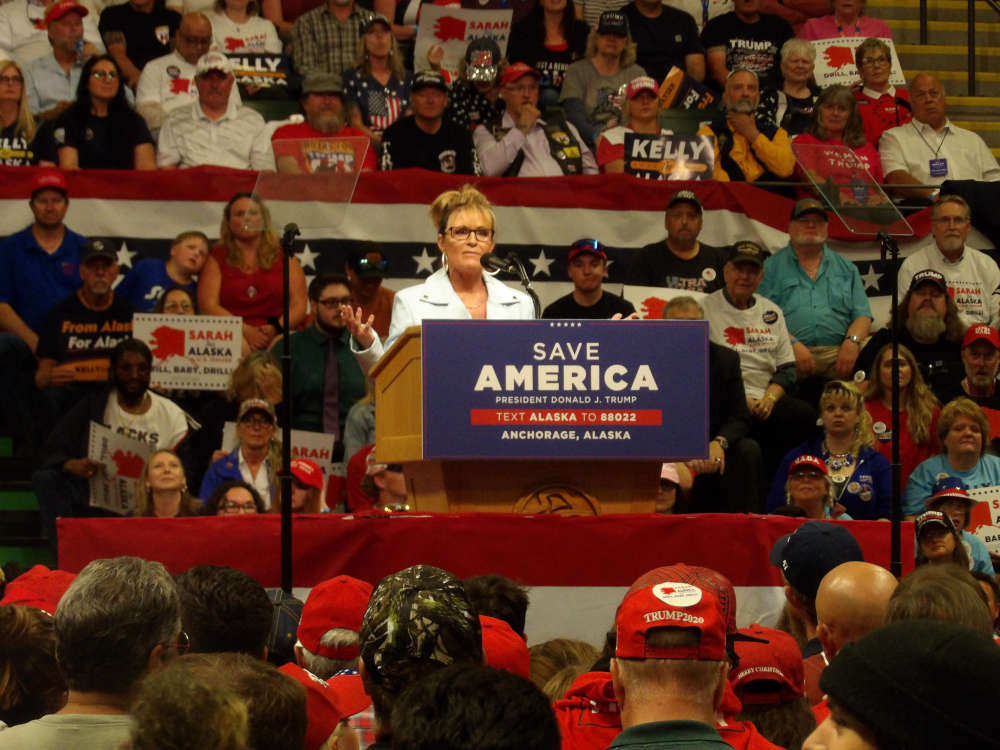 Former Gov. Palin said Trump supported her through difficult times when she believes the media was harassing her family.

"Donald Trump, he would write me a note and he would say, 'Hang in there. The people who know you, they love you. They know the truth about your family,'" Palin said. "I knew that this man cared about family, he cared about a culture of life, and a culture of love. And I knew, way back when, that if he ever did run for the highest office in the land, the most powerful position in the world, Donald Trump, he would do what he campaigned on doing, and isn't that rare? He actually fulfilled his promises. That's why he's not a politician. He would once in a while jot a note down saying hang in there and ignore what they're saying. He always knew it was about the kids, because I am a Mama Grizzly."

For the majority of his address, Trump was in what looked to be a campaign mode, telling supporters, "I ran twice, I won twice. I did much better the second time than I did the first, believe it or not, getting many, many millions more votes than we did in 2016. And likewise, I got more votes than any sitting president in the history of our country by far. With the approval of the great people of Alaska, we may have to do it again." 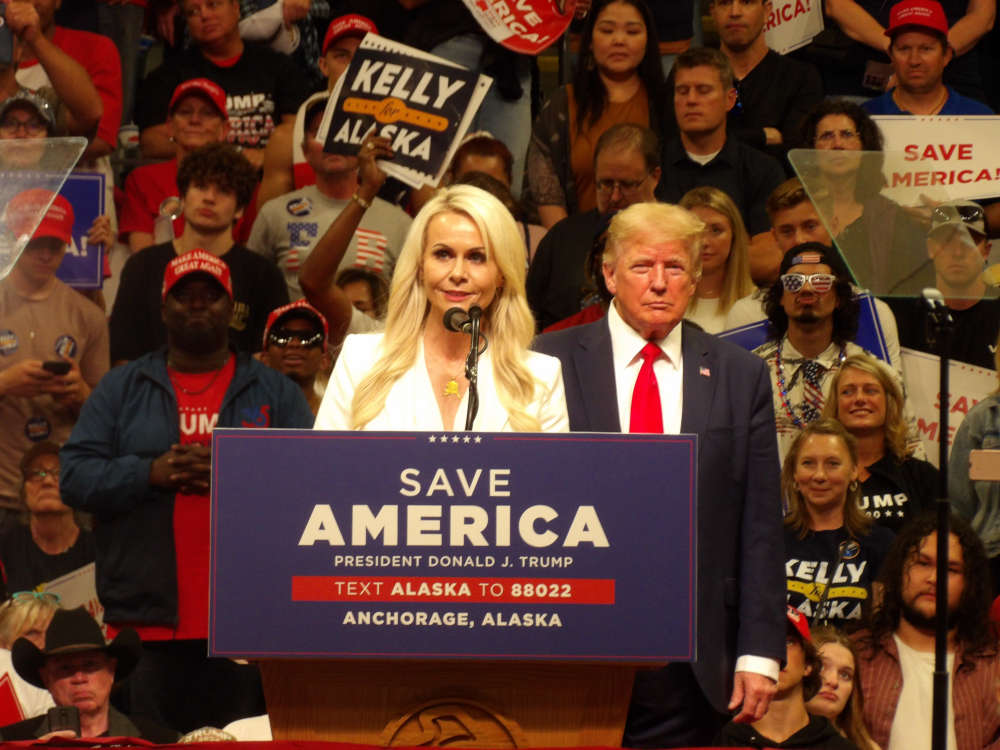 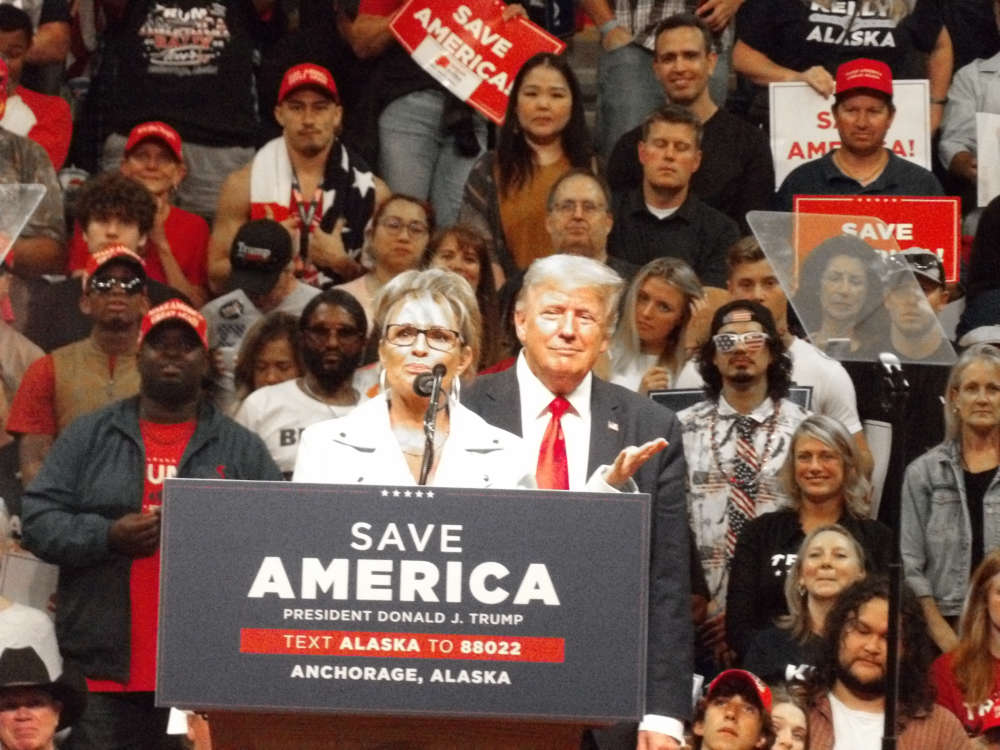