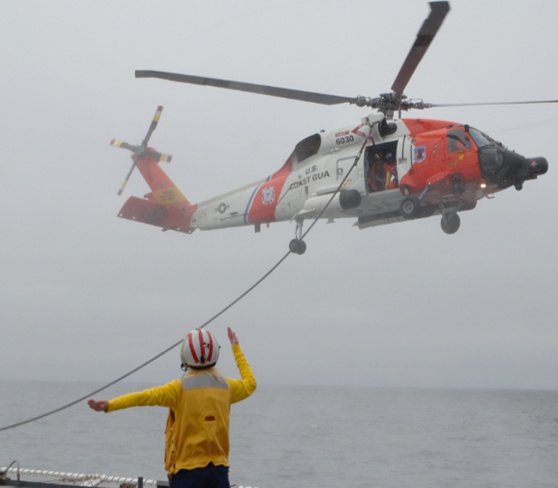 Union Bay, Alaska (KINY) - A man on board the fishing vessel Irony, fell into the water and was found clinging to a piece of debris by the US Coast Guard Sunday.

Sector Juneau watchstanders said they received a search and rescue satellite alert from the vessel around 4:46 pm and responded with a helicopter and rescue boat.

An MH-60 Jayhawk helicopter from Air Station Sitka spotted the 70-year-old man and retrieved him from the waters northwest of Meyers Chuck.

He was taken to emergency medical services in Ketchikan for treatment.  The man was reported to be in stable condition.

Nick Meyers, the Sector Juneau command duty officer, said the emergency position indicating radio beacon was able to locate the man quickly and save his life, "This allowed us to deploy our survival swimmer and hoist the man to safety to get him to further medical treatment."

The Coast Guard Cutter Anacapa also responded to the scene.

"What saved this man's life was his essential survival equipment," said Lt. Justin Neal, a helicopter pilot from Air Station Sitka, "His survival suit kept him warm long enough for us to rescue him.

Wind gusts reached 57 miles per hour during the rescue.