Feds support tribe's push for only whale hunt in mainland US 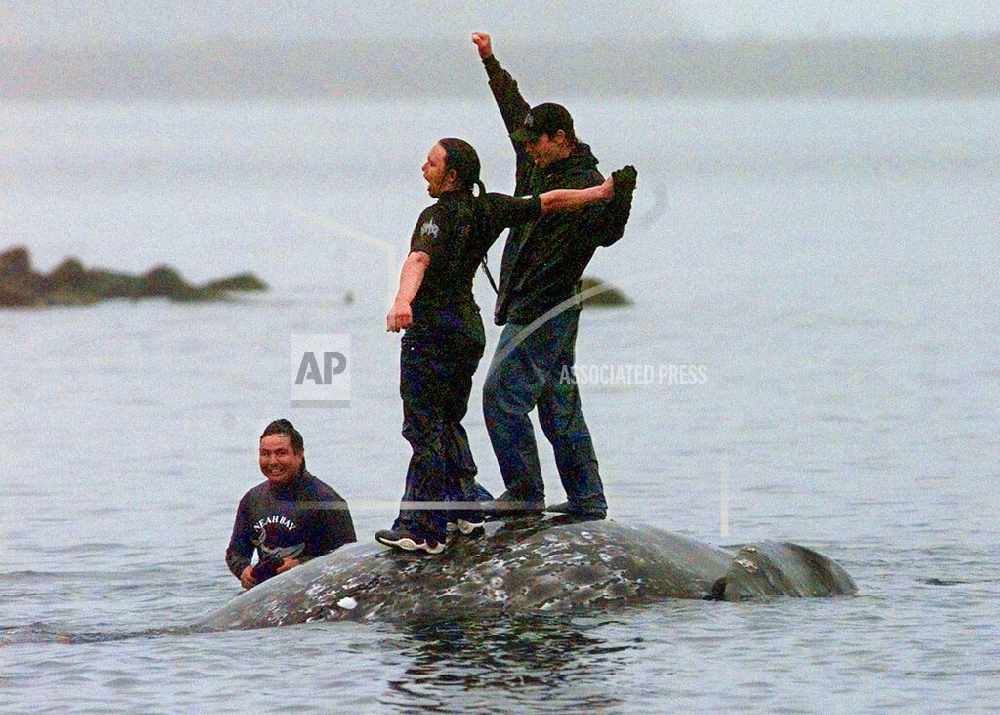 FILE - In this May 17, 1999 AP file photo, two Makah Indian whalers stand atop the carcass of a dead gray whale moments after helping tow it close to shore in the harbor at Neah Bay, Wash.

It would be the only whale hunts in the mainland U.S., a long-held custom that animal rights activists oppose as outdated and cruel.

The National Oceanic and Atmospheric Administration on Thursday announced its proposal to allow the Makah tribe to hunt one to three Eastern North Pacific gray whales annually over a 10-year period off the Washington coast. Tribes in Alaska and other parts of the world legally hunt whales, which they rely on for food.

The move marks the strongest federal support that the Makah tribe has received, though it still faces a court hearing in August. A judge will make a recommendation back to NOAA Fisheries for a final decision. If approved, the tribe can then apply for permits and hunts could begin as early as next year.

The tribe, based about 120 miles (193 kilometers) northwest of Seattle along the Olympic Peninsula, has historically hunted whales and harvested those that wash ashore. It's a centuries-old tradition for the Makah people, who say it's a cultural, spiritual and subsistence need that's been limited for nearly 100 years.

Makah Tribal Councilman Patrick DePoe said the vast majority of the 2,800 members — including 1,100 who still live in the area — want to return to their native diet by reintroducing whale meat and blubber.

"This is laying out a path of healing for my community and is going to be healing for future generations," DePoe said.

Animal welfare and other groups have spent 20 years fighting in court to stop their hunts. In 2004, the 9th U.S. Circuit Court of Appeals said the tribe could not obtain a waiver under the Marine Mammal Protection Act until an environmental assessment was done.

DJ Schubert, a wildlife biologist with the Animal Welfare Institute, said the tribe should not depend on whales for food and urged the tribe to consider other options, such as operating whale watching tours to generate revenue.

"The Makah have no nutritional subsistence need. Without gray whales, they've survived quite well for 90 years," Schubert said.

Though the Makah are guaranteed whaling rights under their 1855 treaty with the U.S., they stopped hunting voluntarily in the 1920s after commercial whaling decimated gray whales. The tribe sought to resume hunts after the species was removed from the federal endangered species list in 1994.

NOAA spokesman Michael Milstein said its most recent study in 2014 suggested that more than 600 Eastern North Pacific gray whales could be removed each year without affecting the animal's long-term sustainability. There are now about 27,000 of the whales, he said.

"This gray whale population at this point is very healthy and fully recovered and probably as large as it's ever been," Milstein said.

Milstein said authorities would monitor the hunts and the animal's numbers. If approved, the permits would restrict when and how many hunts can take place to minimize the risks to other whales known to migrate to the area. That includes the Western North Pacific gray whale, which is endangered, and the Pacific Coast feeding group.

Schubert said the government hasn't adequately considered the cruelty of the hunts. He said his coalition of animal rights advocates will keep fighting the tribe's request because they don't believe it qualifies for waivers from U.S. and international laws on whale hunting.

"I consider them colleagues, but we simply disagree that whaling is the future and the Makah should be allowed to whale," Schubert said of the tribe.

An illegal whale hunt in 2007 killed a gray whale, which tribal leaders condemned. Two tribal members went to prison for the crime.

"My community has always historically been known as whalers and to be known as something but not to be able to practice that, we know that it could be hard for people in our community," DePoe said.