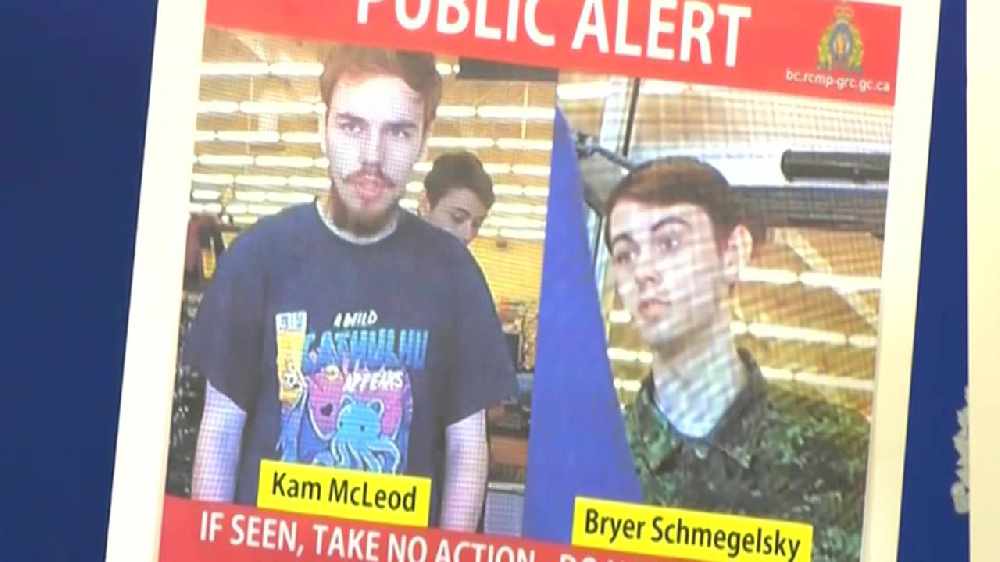 TORONTO (AP) — The father of one of the suspects in the slaying of an American woman, her Australian boyfriend, and another man said Wednesday he expects a nationwide manhunt to end in the death of his son, who is on "a suicide mission."

The grim prediction came as Canadian police said they were setting up roadblocks around the remote Manitoba town of Gillam, where two young suspects, 19-year-old Kam McLeod, and 18-year-old Bryer Schmegelsky, recently left a burned-out vehicle they had been traveling in.

Royal Canadian Mounted Police Cpl. Julie Courchaine said police "are coming from all over" to Gillam, which is more than 2,000 miles away from a region in northern British Columbia where another burned vehicle was found Friday and where the three people were apparently killed.

The victims have been identified as American Chynna Deese, 24, Australian Lucas Fowler, 23, and Leonard Dyck, 64, of Vancouver. Police released Dyck's name late Wednesday and announced that McLeod and Schmegelsky have been charged with second-degree murder in his death.

McLeod and Schmegelsky themselves were originally considered missing persons and only became suspects in the case Tuesday. Officers across the country were searching for the young men.

Schmegelsky's father, Alan Schmegelsky, said Wednesday that his son had a troubled upbringing and is in "very serious pain." His son struggled through his parents' acrimonious split in 2005 and his main influences became video games and YouTube, the father said.

"A normal child doesn't travel across the country killing people. A child in some very serious pain does," Alan Schmegelsky told Canadian Press. He said he expects his son will die in a confrontation with police.

"He's on a suicide mission. He wants his pain to end," the father said, breaking into tears. "Basically, he's going to be dead today or tomorrow. I know that. Rest in peace, Bryer. I love you. I'm so sorry all this had to happen."

Even if his son is caught, his life will be over, he said. "He wants his hurt to end. They're going to go out in a blaze of glory. Trust me on this."

The father said he and his wife separated when their son was 5. She moved with the boy to the small Vancouver Island community of Port Alberni, where he met McLeod. They attended the same elementary school and quickly became inseparable best friends.

They were "every day, good kids" who didn't get into trouble, but his son had problems at home and, at 16, briefly moved to Victoria to live with him, Alan Schmegelsky said. The boy then returned to Port Alberni to live with his grandmother.

His son doesn't own any firearms and doesn't know how to drive, Alan Schmegelsky said. He worked at the Port Alberni Walmart after graduating from high school earlier this year, but was disappointed with the job and told his dad he was setting off to Alberta with McLeod to look for work.

The father recalled that his son bought a nice black suit with his second paycheck from Walmart.

"Now I realize it's his funeral suit," he said.

In Port Alberni, signs with "No Trespassing" were staked outside McLeod's large waterfront family home. His father, Keith McLeod, released a written statement.

"This is what I do know — Kam is a kind, considerate, caring young man (who) always has been concerned about other people's feelings," McLeod said.

"As we are trapped in our homes due to media people, we try to wrap our heads around what is happening and hope that Kam will come home to us safely so we can all get to the bottom of this story."

The separate discoveries of three bodies and a burning car have shaken rural northern British Columbia.

During the investigation, police found the body of what was then an unidentified man roughly a mile (about 2 kilometers) from a burned-out car.

That was about 300 miles (500 kilometers) from the spot along the Alaska Highway near Liard Hot Springs where Deese and Fowler were found shot dead over a week ago.

The couple had met at a hostel in Croatia and their romance blossomed as they adventured across the U.S., Mexico, Peru and elsewhere, said British Deese, the woman's older brother.

British Deese said the couple was on a trip to visit Canadian national parks and said the family believes they must have had engine trouble in their van.

Dyck's family said in a statement late Wednesday: "We are truly heartbroken by the sudden and tragic loss of Len. He was a loving husband and father. His death has created unthinkable grief and we are struggling to understand what has happened."

Police said Tuesday that McLeod and Schmegelsky were traveling in northern Saskatchewan in a grey 2011 Toyota Rav 4, which was the car later found burned in Gillam.

Residents of Gillam were locking their doors and cars.

But Deputy Mayor John McDonald said if McLeod and Schmegelsky were wandering around in the bush, they couldn't have picked a worse time.

"The sandflies came out three days ago and they're just voracious," he said. "I'm quite sure they'll be more than happy to have someone find them."

Authorities in the neighboring province of Ontario were also warning the public about the suspects, who were considered armed and dangerous.

Police released surveillance photos of the two in Saskatchewan and urged the public not to approach them and to call 911.

Police said earlier the young men were traveling to Whitehorse in the Yukon to look for work and had not been in contact with their families for the past few days.