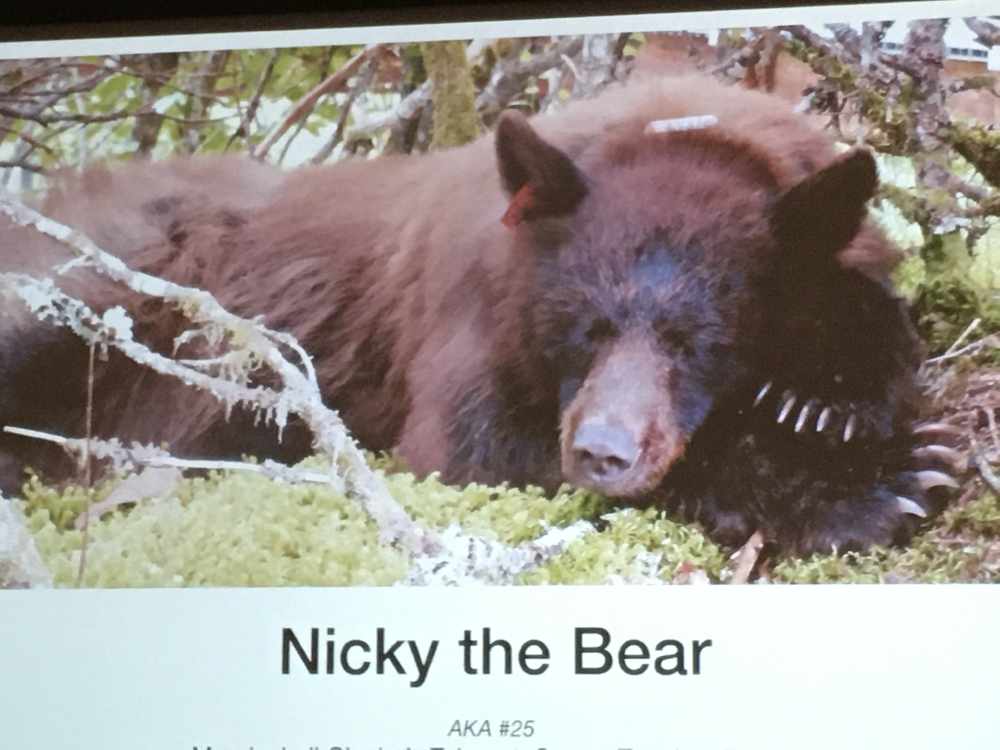 A slide of Nicky the Bear presented at the Fireside Lecture.

Tolerant, smart, trusting, and tender are good qualities for any mother.  But what about a wild mother black bear?

Nicky the Bear, also known as Bear 25, was the subject of the weekly Fireside Lecture at the Mendenhall Glacier Friday.

She has become a common sight at the glacier each year.

Laurie Craig, former Ranger at the Glacier was the featured speaker.  She worked at Mendenhall from 2004 to 2018.

"Every once in a while an animal comes into our lives with the power to change everything.  Nicky is one of those animals.  She is identifiable by her cinnamon-colored coat, the red ear tag, and a nick in her ear.

Elevated platforms were open at the Glacier in July, 2015 in order to view fish.   The platforms also kept people safe and the bears no longer felt threatened.

"The fences keep the good people and the good bears where they need to be.  Fences do a great job telling people where to go."

Craig said you should never underestimate Bear 25 quickness and power.

Craig encouraged the crowd to learn about bear spray and how to use it. "We had a burglary in our welcome center and they sprayed the bear spray throughout the office and the door handles.  Within a few hours, our employees had to vacate the center.  Bear spray is a valuable thing to have and the very best tool, treat it like a weapon but learn how to use it."

They closed half the trail so the bears could come and go freely.  It gave bears an escape route and some security.

A bear was struck by a vehicle in 2008.  It led to speed bumps being installed.  The Bear Volunteer Program helped tell people what to do and how to act when they see a bear.

Bears even cause bear traffic jams at busy times during the summer.

Once the summer rush is over bears often are seen on the sidewalks, the stairs and the parking lots.

Naa Tlaa was the first collared bear in 2007.  it was given the Tlingit name translated in English to 'Clan mother.'  She lived to age 24.  Nicky is now 21 years old.

After the talk, an award was presented to John Neary who was the director of the Mendenhall Glacier visitor center.  Neary retired after 37 years of service to the state.