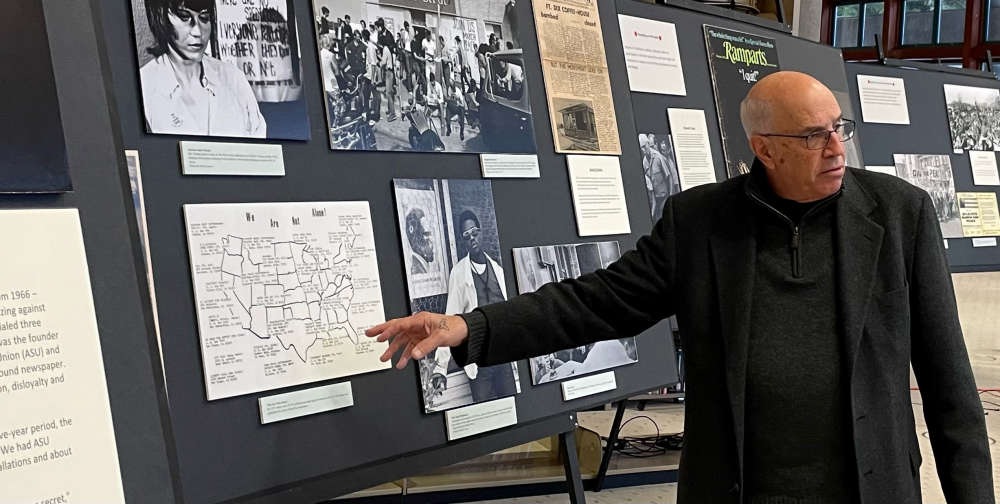 Curator Ron Carver pointing to a panel at the exhibt in the Egan Library.

Juneau, Alaska (KINY) - The University of Alaska Southeast is hosting two exhibits related to the Vietnam war: “Waging Peace in Vietnam: US Soldiers and Veterans Who Opposed the War” and “My Lai: A Massacre Took 504 Souls and Shook the World.”

Waging Peace in Vietnam, the primary exhibit in the Egan Library, seeks to inform scholars, students and the general public that as America escalated the number of troops engaged in the Vietnam War, thousands of our soldiers, sailors and pilots refused to fight, sail and fly more bombing missions.

In My Lai: A Massacre Took 504 Souls and Shook the World, Army photographer Ronald L. Haeberle’s color photographs of the My Lai Massacre presented with his commentary and with tributes to the soldiers who exposed the horror of this mission.  Haeiberle will serve as the guest just for the student essay contest.

Both exhibits are curated by Ron Carver, a photographer, social justice, and labor rights activist with roots in the American civil rights and anti-war movements of the 1960s.

"A lot of people know there was a peace movement during the Vietnam War, most do not know that it was led in and energized by 10s of 1000s of active duty soldiers and veterans to oppose the war. And frankly, most scholars at our universities don't know this," he said. "This is an unknown story, which is why in our exhibit, we have documents from the US National Archives, we have not only the papers that the G.Is put out,  but we have articles from major mainstream US newspapers and New York Times Boston Globe As in others. So we want people to realize that this is actually an inspiring story," Carver said.

In conjunction with the exhibits, several events are planned to include a symposium, film screenings, panel discussions, poetry readings, receptions, and a student essay competition.

UAS is the 15th American university that has hosted the exhibits. The exhibits opened, which are on display in the UAS Egan Library and Egan Classroom Wing, on November 11 and ends December 15.  Carver said the exhibit started in 2016 when he went to Vietnam to photograph efforts to clear landmines and unexploded bombs from the countryside.

"On my first day, I landed in Ho Chi Minh City, the current name is Saigon and stopped by the War Remnants Museum.. in talking with the director of that museum, she asked me what had I done during the war, and I said I was against the war, but I worked for three years, helping us soldiers, set up coffee houses, in the military, base, towns, common army towns," he explained. "She said to me she had heard about the the GI movement, what it was called the GI peace movement, had always wanted to have an exhibit on it but didn't quite know how to do one and and asked if I would help her by putting one together."