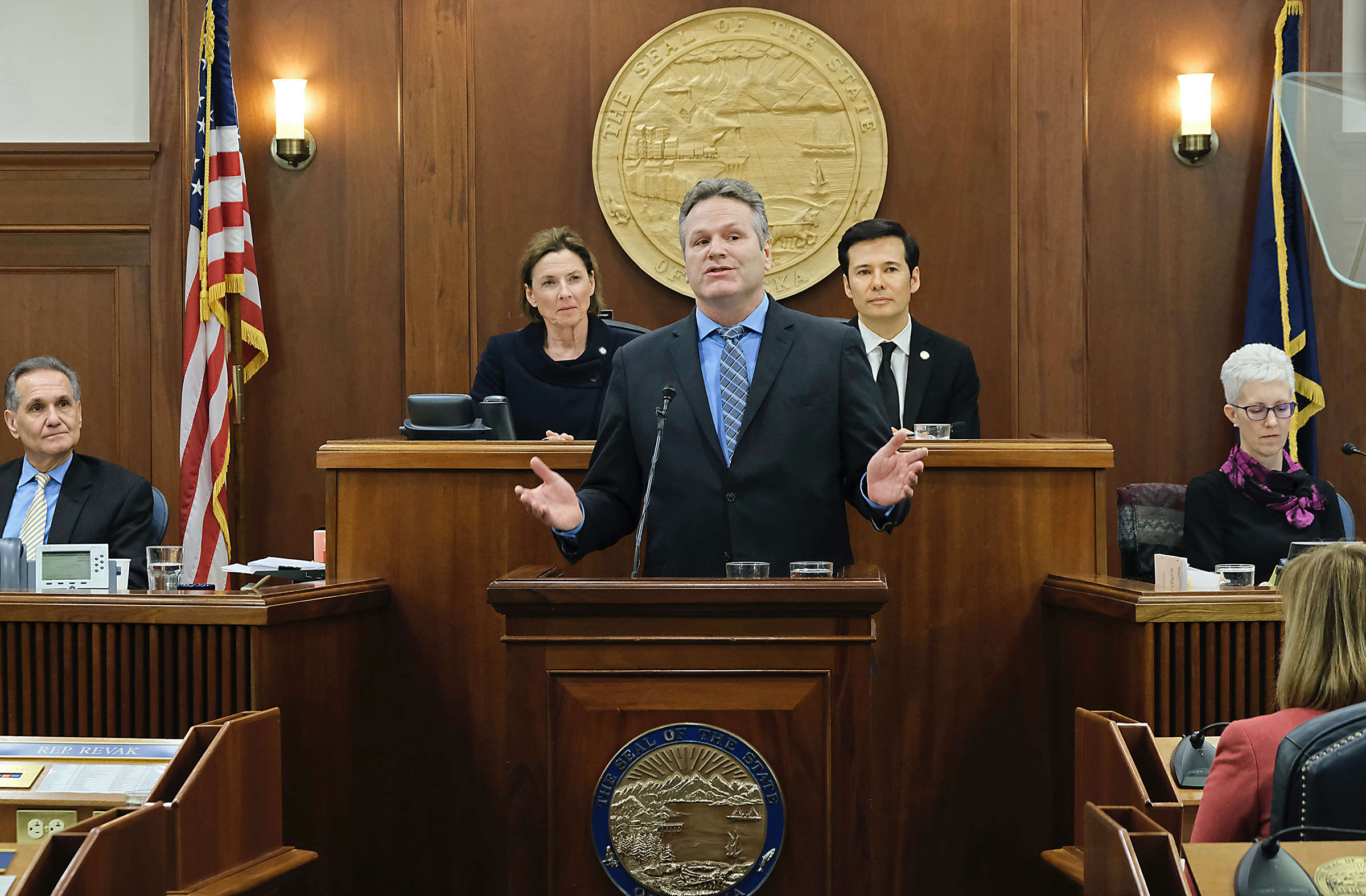 Gov. Mike Dunleavy delivers the State of the State address to the joint legislative session on the House floor of the state Capitol in Juneau in 2019. (Klas Stolpe)

Juneau, Alaska (AP) — A group seeking Alaska Gov. Mike Dunleavy’s ouster has yet to gather enough signatures to force a recall election, nearly two years after getting started and with just over a year before the 2022 primary.

Recall Dunleavy Chair Meda DeWitt said the organization was slowed by the pandemic last year and continues gathering signatures. She said its leaders are expected to meet soon, though she declined to say when, and would release an update.

“People aren’t used to things moving at an organic pace, and that just goes to the fact that we’re people powered,” she said. “We don’t have large coffers of money, as other people have suggested. We are volunteer powered.”

It is unclear how much money either side has raised; little public reporting is required during the signature-gathering phase.

The last update on the recall group’s website is dated April 26 and showed 57,897 signatures collected. DeWitt said the group is going through an auditing process to “make sure we know what we have, very specifically.”

A total of 71,252 signatures is needed to qualify for a recall election.

The recall group has said its effort is bipartisan.

“Can I tell you that we’re going to submit all of our signatures to the Division of Elections on X-day? No, I cannot tell you that right now,” DeWitt said, adding in part that there “has to be a level of strategy moving forward.”

The effort was ignited in 2019 by public outrage over cuts proposed by Dunleavy, a Republican, during his first year in office. Supporters of the recall quickly gathered signatures for an initial phase. But their application was rejected, spawning a legal fight, and then the pandemic hit.

The Alaska Supreme Court in May 2020 ruled the recall effort could proceed. It had earlier allowed the group to begin the last round of signature-gathering while it weighed the case.

Dunleavy has not yet said whether he will seek reelection next year. His office did not answer questions about the recall Wednesday and instead recommended contacting the recall opposition group.

Cynthia Henry, chair of the pro-Dunleavy group Keep Dunleavy, said if there is a recall election, “we will be well positioned to run a campaign to keep the governor in his office.”

A recent fundraising email from the Keep Dunleavy group characterized the recall effort as “finally losing steam” and the governor as “gaining momentum.”

Under state law, a recall petition must be filed at least 180 days before the end of a governor’s term, which in this case would make the deadline June 8, 2022, said Tiffany Montemayor, a spokesperson for the state Division of Elections.

The division has up to 30 days to review a petition. If it finds the paperwork meets requirements, it would notify the petitioners and Dunleavy, and an election would be held 60 to 90 days later, she wrote in an email.

The primary election is scheduled for Aug. 16, 2022. Under a voter initiative passed last year, it would be an open primary, with the top four vote getters advancing to the general election. A legal challenge to the system set up by the initiative is pending.

“This is something clearly a lot of Alaskans invested in from the get-go,” she said.

Kavanaugh added that while there is value in continuing the effort, at some point recall leaders may need to ask whether it’s drawing attention and resources from other candidates.

“I think that that absolutely needs to be considered and would be of concern,” she said. “We’re not there yet.”