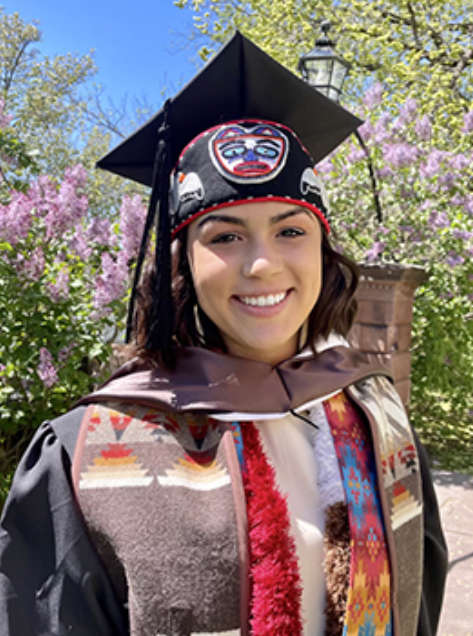 Juneau, Alaska (KINY) - Sealaska Heritage Institute has chosen a Ph.D. student with a focus on Alaska Native sovereignty as the recipient of its 2021 Judson L. Brown Leadership Award.

The honor was given to Tlingit scholar Breylan Náajeyistláa Martin, who holds a master’s degree from Brown University and is pursuing her doctorate in ethnic studies with a focus on Native American studies at the University of California, Berkeley.

According to a statement from SHI, the $5,000 award goes to students who have demonstrated academic achievement and leadership skills, said SHI President Rosita Worl.

“Breylan at a young age has shown a remarkable dedication to the Native community and to the furtherance of Indigenous rights. We believe she will make a difference as a Tlingit leader and a scholar of colonial oppression of Native people,” Worl said.

Martin began her higher education journey at Emory University, majoring in religion and anthropology and minoring in dance and movement. She was awarded the Eugene Bianchi Prize for commitment to the community following her senior thesis that explored the spiritual implications of the Native American Graves Protection and Repatriation Act.

“These roles helped prepare me for my leadership positions during my master’s degree work at Brown,” Martin explained of her rise to elected positions. These allowed her to advocate for formal recognition of Narragansett land that the university operates on. Her work as the master’s advocacy chair culminated in the creation of a program that provided weekly produce to the student community during the pandemic, established a community pantry and ultimately secured permanent funding for the program in the spring of 2021.

“I believe in building supportive and interconnected communities because of the generosity that has sustained me,” Martin said of the reciprocal relationships she views as transformative.

Martin, who is Raven of the T'akdeintaan clan and the X'áakw Hít, looks for ways to serve her local community when she is in school and away from her own people. She has recently been elected as the co-chair of the American Indian Graduate Student Association at Berkeley, which was established to aid the social and academic well-being of Indigenous students on campus.

“I hope to continue to translate my professional skills and cultural heritage knowledge… into work that is centered on and in service to my Native community,” Martin explained.

Martin is focused on uncovering how the Tlingit have subversively navigated legislative encroachments onto the land and hopes to glean ideas from Tlingit cultural values that clearly trace a path forward by asking a guiding question: how have the Tlingit implemented a unique instance of counter-governance that has become increasingly friendly towards the environment?

“Breylan’s record of serving and giving back to the community, no matter where she resides, is admirable and one of our core cultural values that stresses reciprocity and obligation to those who help you,” Worl said.

Martin hopes to glean ideas from Tlingit cultural values that clearly trace a path forward by asking a guiding question: how have the Tlingit implemented a unique instance of counter-governance that has become increasingly friendly towards the environment?

In the future, Martin intends to “return home filled with ideas of transformation” and to teach within the University of Alaska system where she can infuse more tools and knowledge. “I look forward to the futures we are creating and am excited to be contributing to them.”