An illustration of what Denali could have looked like during Late Cretaceous period. Illustration by Karen Carr.

Juneau, AK (KINY) - After a discovery that suggests that the Bering Strait land bridge could be a dinosaur superhighway, we talked with paleontologist Dr. Anthony Fiorillo about chasing dinosaurs in Alaska, his career, and advice for others wanting a career in paleontology.

At a young age, Anthony Fiorillo was brought to the local Natural History Museum by his grandmother. From that point on, he never stopped thinking about or being excited by the study of ancient creatures like mammoths or dinosaurs.

Fiorillo is now the Chief Curator and the Vice President of Research & Collections at the Perot Museum of Nature & Science in Dallas, Texas. He has been studying dinosaur footprints and skeletons in Alaska for many years. His work has brought together a thesis that duck-billed hadrosaurs traveled the Alaskan landscape alongside a typically Asian-found dinosaur, the therizinosaur.

Some of the first discoveries made were given to him by a friend in Denali.

"The original discovery of a therizinosaur footprint was brought to my attention by a guy by the name of David Tomeo of Alaska Geographic in Denali. I had been going to Denali for years, he knew I was coming back later that summer, he was in a backcountry valley and found a footprint, took a picture of it and sent it to me."

That footprint had created a lot of questions, as it didn't quite fit with the other dinosaurs they knew were found in the area. Later on, they discovered that this track did, in fact, belong to a therizinosaur. 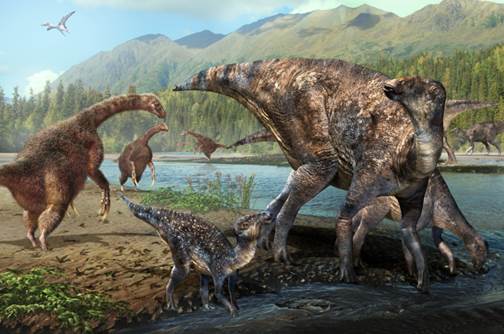 We asked him to explain the significance of this discovery.

"What we say in our paper is that we have this little finger of an Asian ecosystem making its way through Alaska in this one little valley in Denali."

Fiorillo's studies suggest that dinosaurs were using the Bering Strait land bridge to travel into America.

"People are familiar with the idea of Beringia (the Bering land bridge) but they think of it as peopling of the new world, wooly mammoths, wooly rhinos, or things like that. That bridge was in place during the time the dinosaurs roamed the planet. Presumably, that's what was happening in this discovery. Part of Asia was coming into North America."

Fiorillo's Alaskan dinosaur studies will see him return to Aniakchak.

"We had made some discoveries in Denali that just exploded on us. Thousands of dinosaur footprints were found in Denali. That moved my attention to that part of Alaska, but now it's time to go back to where the original discoveries were made and so we've been working the last couple years in Aniakchak and I imagine we'll have some great stories to tell soon."

Fiorillo hopes to spend many more years learning about the Earth's past in Alaska. He has already spent over two decades of his life studying in Alaska.

"At this point in my career, I can't imagine doing anything else. It's been such a great ride."

Fiorillo tells us that those looking into a similar career primarily need curiosity.

"Probably the biggest thing that anyone would need to pursue paleontology is that they have to stay curious. They have to be passionate, curious, keep their eyes open, and that will get them there."

Read the latest publication of Fiorillo's work on Scientific Reports. He also has a book published called "Alaska Dinosaurs: An Ancient Arctic World" that is available on Amazon.