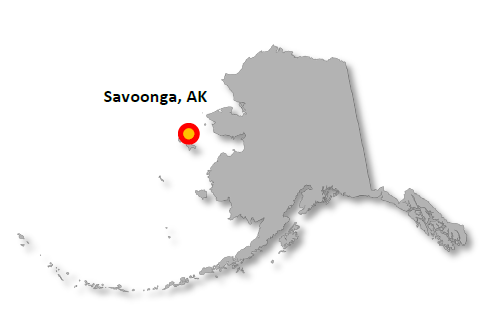 (Photo Courtesy of the Alaska Department of Environmental Conservation.)

Savoonga, Alaska (KINY) - The spill was reported to have occurred on February 27, 2021, the release was discovered by Alaska Village Electric Coop personnel on-site while taking inventory that afternoon.

It was reported to the National Response Center and to the Department of Environmental Conservation on March 1.

An estimated 15,000 to 20,000 gallons of #2 Diesel was released from a bulk oil storage tank into secondary containment.

Diesel had breached the secondary containment wall, potentially by wicking through snowdrifts, affecting an estimated area of 2 square feet.

The exact extent of the contaminated area outside of secondary containment is still under delineation.

The reported cause was a valve that was added to a header line on a 29,950 gallon bulk fuel tank as a temporary fix to alleviate an airlock.

The valve was not removed at the appropriate time and left in an open position allowing diesel to flow to the ground.

2838 gallons of diesel have been pumped from an excavated hole in the snowdrifts at a low point within the secondary containment into an empty tank on-site.

The spill location is approximately 450 feet from the Bering Sea and 65 feet from wetland tundra.

Alaska Village Electric Coop responders on site do not believe these resources have been impacted at this time.