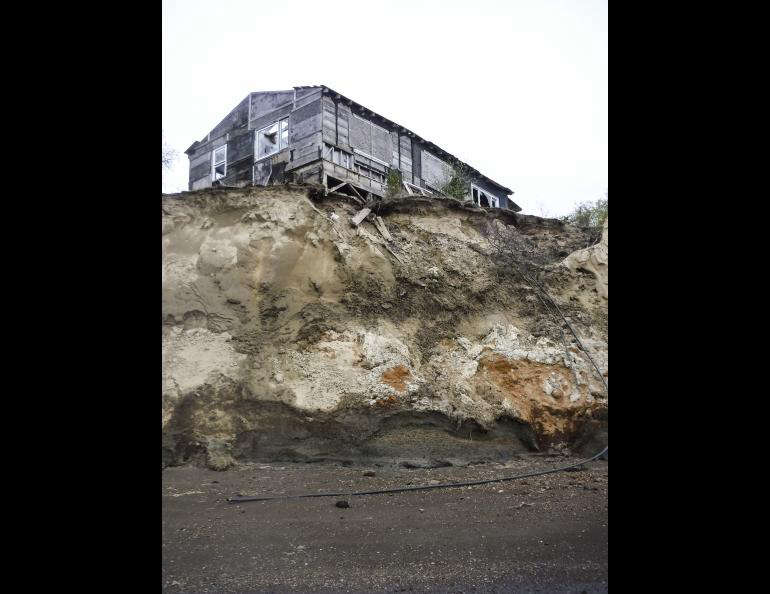 Erosion of a bluff above at Kanakanak Beach on May 28, 2021, in Dillingham, Alaska. (UAF/GI photo by Chris Maio.)

Juneau, Alaska (KINY) - Students of the University of Alaska Fairbanks will be returning to Bristol Bay communities to continue quantifying and mapping widespread coastal erosion.

Students in the Arctic Coastal Geoscience Lab of the UAF Geophysical Institute have been conducting this research in the region since 2016.

“The data that we're collecting is usually the only data that exists for these areas,” said associate professor Chris Maio, who oversees the research at the Arctic Coastal Geoscience Lab.

A release from the university said that the work by Maio and the students adds to knowledge of Alaska Native elders and others about coastal changes and provides key information for making better-informed community decisions.

The program is a partnership among the Alaska Division of Geological and Geophysical Surveys Coastal Hazard Program, Alaska Sea Grant and the Bristol Bay Native Association.

Maio illustrates the program’s importance by pointing to Dillingham, where the Nushagak River eats vigorously at the bluffs and threatens infrastructure.

Erosion along the river’s mouth has brought the bluff edge to about 120 feet from the sewage lagoon of Kanakanak Hospital, which serves the wider Bristol Bay region. Nearly 7 feet of land falls away annually.

The Dillingham city sewage lagoon is just under 400 feet from the bluff edge, which is eroding at a much faster rate of about 20 feet per year.

“We've documented the annual changes occurring in front of the Dillingham sewage lagoon, and that's helping them to decide what they have to do,” Maio said. “They have to spend millions.”

“The absence of data is a big issue,” he said. “It’s a big problem, because you can't do a lot of planning if you don't know what the tides are doing and what the wave regime is.”

Data obtained by Maio and the students bolsters a community’s grant proposals and gives engineers a head start in other project phases.

“If they didn't have the data, then all they have is their word, or anecdotal evidence, which isn’t always enough for engineering assessments,” said Roberta Glenn, a master’s student in geography who also interns with the Alaska Division of Geological and Geophysical Surveys and has spent three summers doing fieldwork with the division and the UAF lab.

“Climate change is affecting the Bristol Bay region, with erosion impacting our infrastructure, culture, fishing and burial sites,” said CaSandera Johnson, environmental program manager for Bristol Bay Native Association. “The outcomes of this collaboration, such as erosion mapping and hazard assessments, will be used to secure funding to address erosion impacts.”

One example is at Pilot Point, a community on the northern side of the Alaska Peninsula on Ugashik Bay.

The UAF students are helping document erosion on the road to the waterfront bulkhead, where a crane currently unloads fish. They also monitor erosion at the bulkhead itself and offer other information to the engineers.

Work by Maio and the ACGL team has jump-started road engineering, feasibility and design studies by the Army Corps of Engineers and the U.S. Department of Transportation, said Daniel Kingsley, project consultant for the Pilot Point Tribal Council.