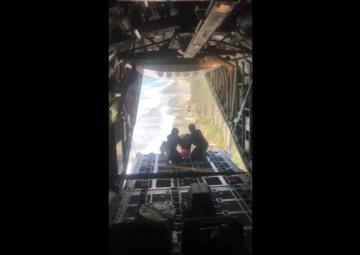 Cordova, Alaska (KINY) The Coast Guard and Alaska State Troopers coordinated efforts to locate and rescue a boater from a disabled and aground 40-foot fishing vessel 127 miles east-southeast of Cordova, Alaska, Wednesday.

A Coast Guard Air Station Kodiak HC-130 Hercules aircrew located the operator of the fishing vessel Gambler while conducting a training flight in the area. The HC-130 aircrew dropped a radio to the man to communicate with him. After coordinating with Alaska State Troopers, the man was rescued from the shore and was reported to be in good condition with no medical concerns.

The HC-130 aircrew was on a training flight in the vicinity of Cordova when they overheard the urgent marine information broadcast and were diverted to the scene to search. After locating the survivor on the beach, the aircraft dropped a rescue pack, containing survival items and a VHF-FM radio, to enable communication with the man. The MH-60 crew was launched to conduct the rescue hoist, if needed.

While on patrol in the area, the Alaska State Troopers spotted the survivor on the beach and were able to safely transport the man back to Cordova.

“This incident highlights the effectiveness of the Maritime Search and Rescue System as it was designed to function,” said Michael McNeil, a Sector Anchorage command center Command Duty Officer. “The proper use of distress devices such as the EPIRB and flares by the vessel captain had a direct impact on the Coast Guard’s ability to render assistance in an extremely remote area of the state. The decision to carry an operable EPIRB device enabled orbiting satellites to quickly pass the vessel’s position and name to the Coast Guard, resulting in a quick response. The Coast Guard reminds the public that properly functioning and registered equipment plays a key role in the Coast Guard’s ability to quickly respond to distress situations.”

Weather on scene was winds at 7 mph, 12 miles visibility and an air temperature of 53 degrees.