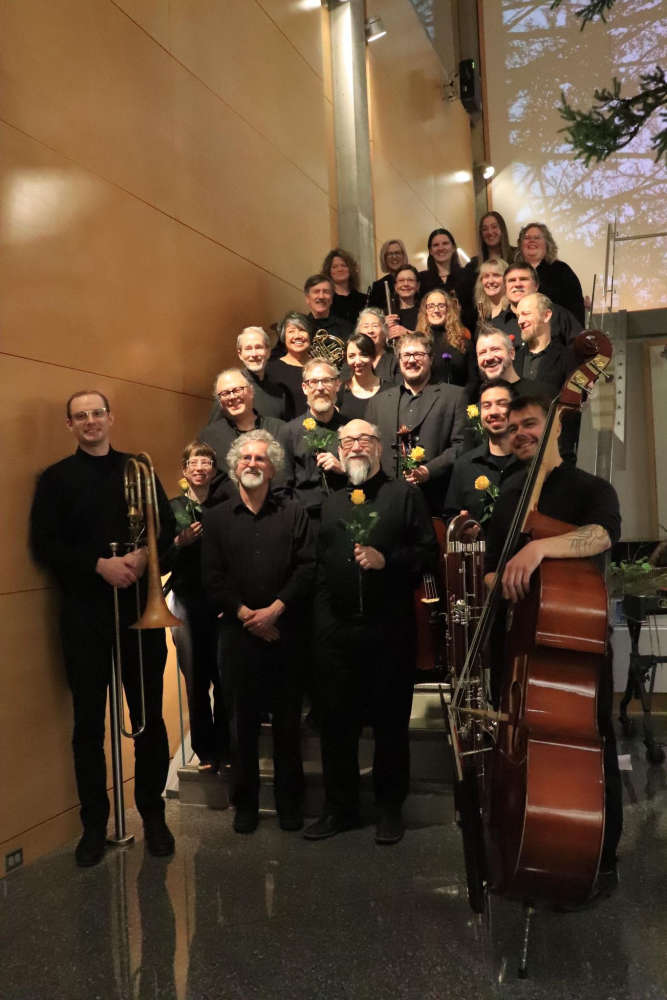 Muscians on the museum's stairs after their show completes. (Photo credit to Jasz Garrett/KINY)

Sally Schlichting is the artistic director for Climate Soundscapes, a musical project on the science of climate change that was presented this weekend.

The Con Brio Chamber series was also formed in 2016 by flutist Schlichting to broaden the reach of chamber music in Juneau.

The first showing was Friday at Northern Lights Church. The second and final showing was Saturday afternoon at Alaska's State museum atrium.

The performance was pay-as-you-can and was followed by an Amalga Distillery after-party, at which climate change themed cocktails were available.

Schlichting talked about the 3-year process.

"So the composers individually were kind of mulling the idea over and looking at the scientific research that each of these scientists had to offer and trying to consider how they could write a piece of music around it. It was challenging for some of them and they hit roadblocks and they stopped writing, the pandemic happened and some of them kept writing and some of them didn't. It was a challenge to try and translate scientific research into a musical work of art."

350 Juneau set up a table so after people listened to music, they could sign up to take climate action.

"Glaciers as they melt carry nutrients from their meltwater downstream, you know, down through the river into what feeds the ecosystem down there. And whoa, what happens if we don't have that transmission of nutrients? And my piece kind of explores that. It looks at the glacier and how it melts and calves and then sends nutrients out and then the system breaks down."

Hunt said that the flutes were the main instrument because they represented melt-off.

The composition ends on an up note, a hopeful pathway that showcases the renewal of glacier meltwater if humanity alters the course.

Ty Wolverton also created a piece about glaciers, 'Boreal Rising', specifically on the water in Suicide Basin, in collaboration with Dina Abdel Fattah.

He said water from the glacier and snow fills in Suicide Basin each year, giving it the impression of inhaling and exhaling. Wolverton wanted to capture the place's aliveness in music.

"We start with pure colors. And then we introduced gray. But as sediments dropped, I took those gray colors and brought them back. And it actually makes you feel as a listener like you go on a journey. You're up, you're part of the water up in Suicide Basin, go from Suicide Basin down to being trapped in the glacier itself. Then being surged into the lake, and then trapped in there until you search down the lake and drop the sediments below. And that's the kind of journey I wanted the listener to also take." 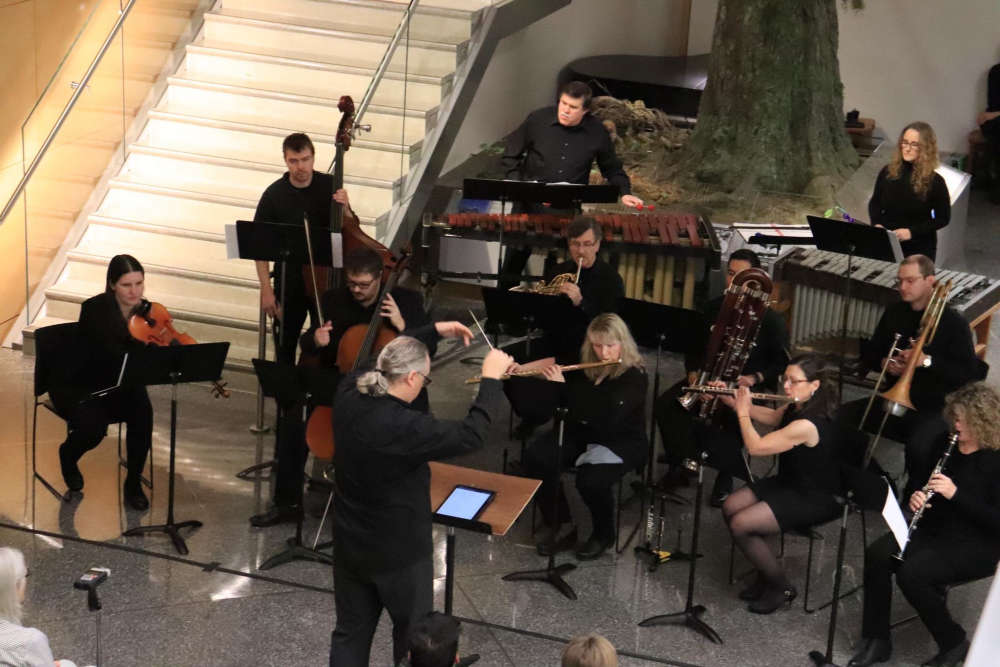 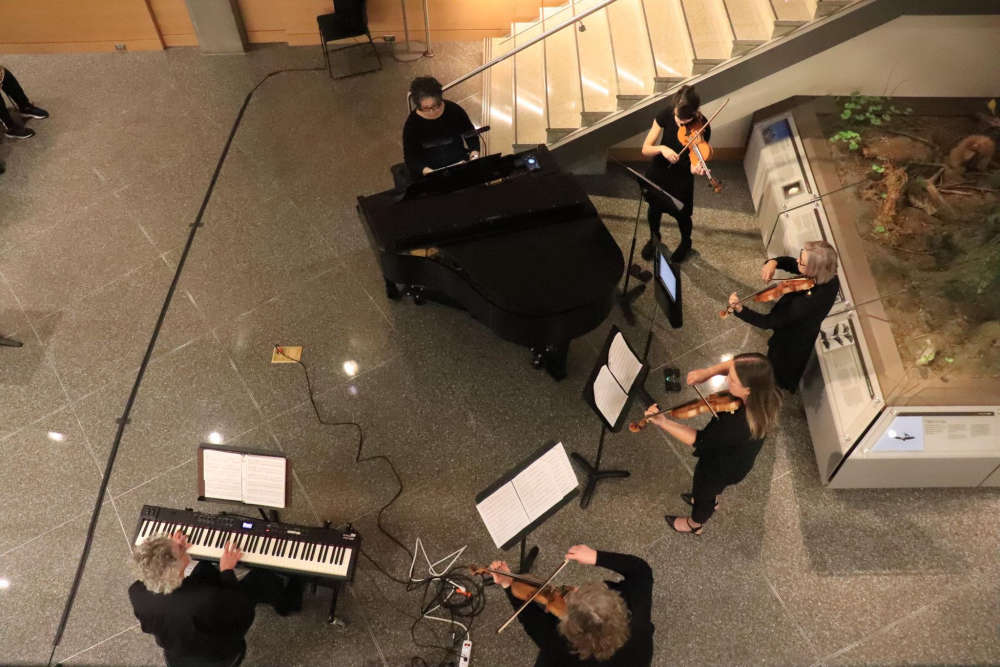 Bucy's piece was an interpretation of a climate phenomenon studied by Vladimir Alexeev, titled 'Babel 2.0'. The climate phenomenon was in the winter of 2017-18 when extreme cold characterized Asia and North America. At the same time, the Pacific, Bering Sea, and Atlantic Arctic were warm with low sea ice. The late sea ice formation in the Bering Strait and change in the atmosphere's jet stream were partially responsible for cold winters in the mid-latitudes and an exceptionally warm winter for Alaska that year. Bucy's piece represented the sounds of rising warm air, the expansion of the Pacific, and jet streams. 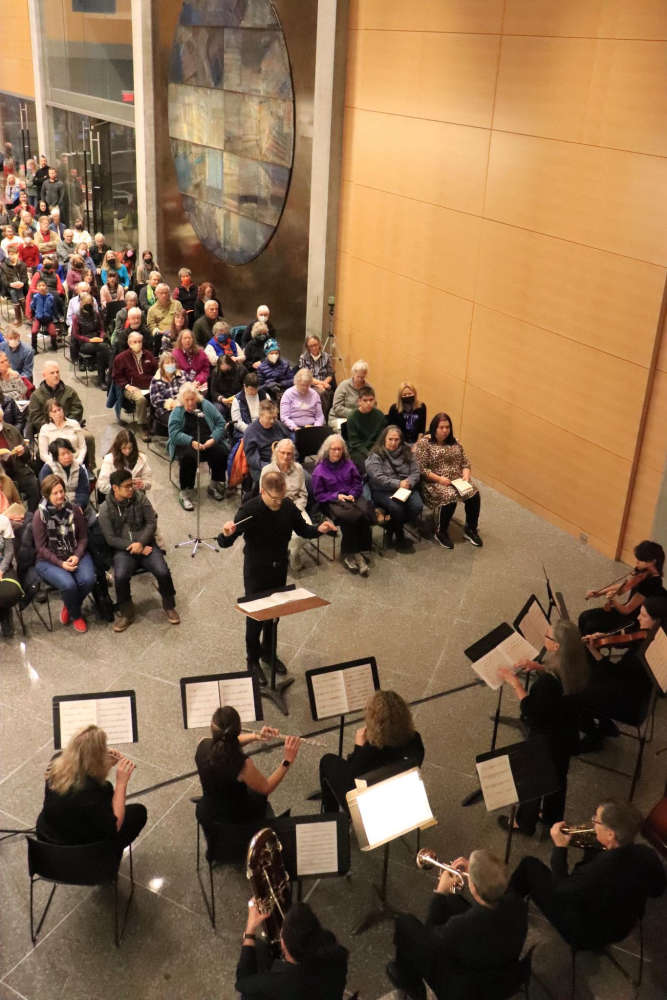 Above: Bucy conducts. His piece was the only one to include vocals. His wife Lastufka, standing fourth right, a mezzo-soprano, sang, "columns rise...from the hand of mankind." Below: Schlichting receives flowers at the end of the performances for her efforts. 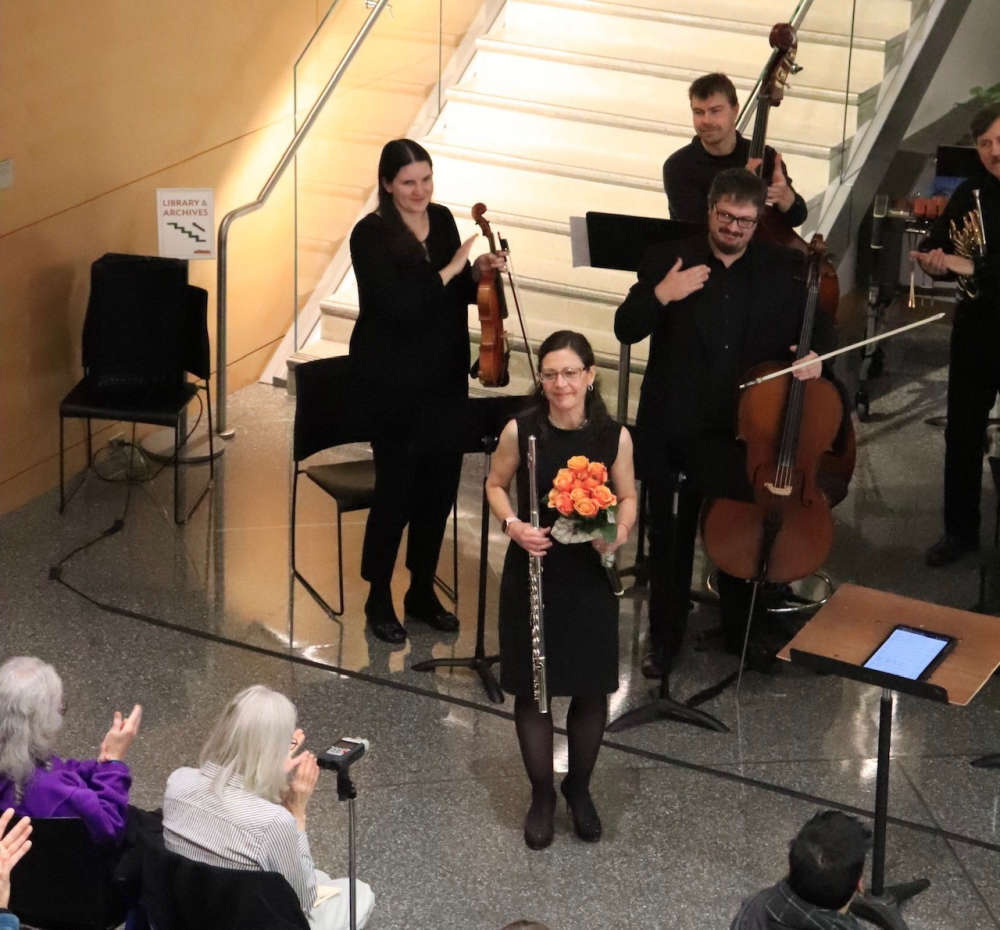 The six scientists are Young, Fattah, Alexeev, Olivia Lee, Javier Fochesatto, all of UAF, and Heidi Pearson of UAS.

Ensembles ranged from a piano duo with strings to a 12-instrument complement.