Arts and action: 'Climate Change for a Cool Planet' 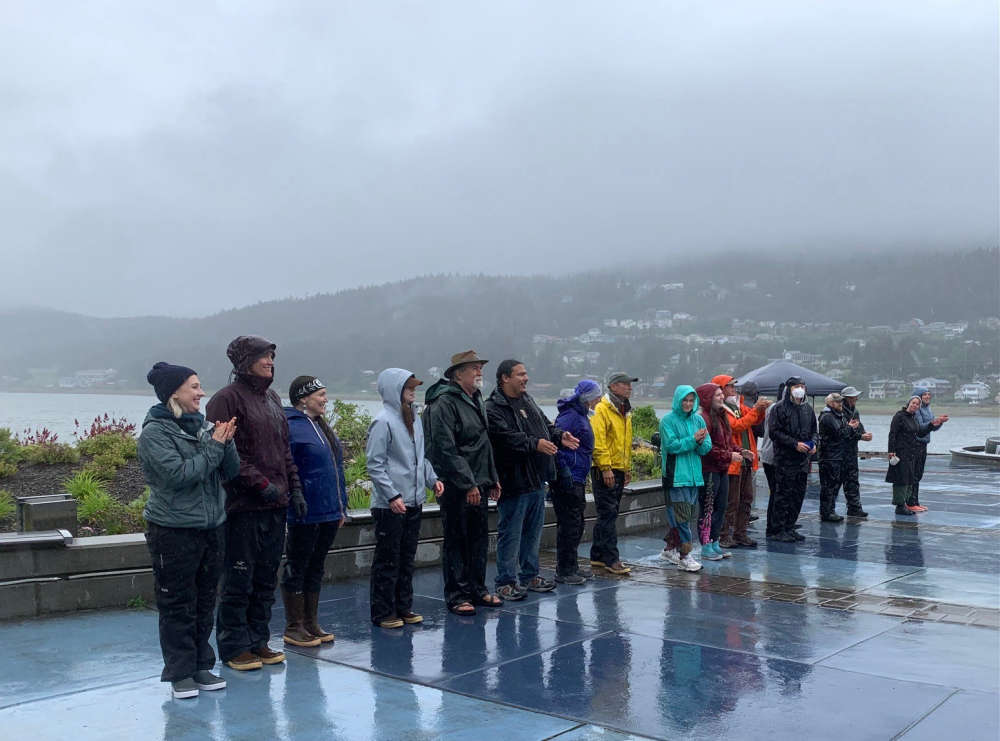 Everyone involved in the fair's performances takes a final bow. (Photos courtesy of Jasz Garrett/KINY)

Juneau, Alaska (KINY) - Co-produced by Theater Alaska and 350 Juneau, the fair featured original plays by Dave Hunsacker and Kristin Ritter and dance choreographed by Hali Duran, along with a musical commission by Michael Bucy.

The climate fair ran from 3 pm to 5 pm at Overstreet Park.

Admission was free and donations appreciated.

"Theater Alaska tries to be inclusive to everyone in Juneau, we try to include everyone we can, for any economic background can attend and be exposed to good theater," Hetty LaVerne, a cast member of "Small Talk," said.

"You can go to their website which is theateralaska.org," Valorie Kissel, another cast member, added.

Included in the fair were vendor booths, free ice cream from Coppa, and climate change information.

"So we are a regional organization built around conservation efforts. We do a lot of water work. Climate change is one of our sectors, we also do work for the Tongass forest. So right now we have our Raven Calls, which show some of the actions that we've been doing. We're here to educate people on some recent matters that are relevant to Southeast Alaska, like issues that are going to be relevant in 2023. Like extending the Renewable Energy Fund to keep powering Alaska's next economy. We would like to establish a Green Bank to demand green energy, and that was introduced in 2022. And we would like to put a green bank into an agency like Alaska Energy Authority, or Alaska Housing Finance Corporation so that the money will go back to Alaskans and fund things like heat pumps or electric car chargers."

Ribera continued, talking about their focus at the fair.

"We are giving away our tide books and so every year our tide books show the tide tables, but also interviews with people from around Southeast Alaska. And so this year the theme is climate change what everyone thinks about it, what solutions, what kind of future they would like, how it impacts people. We also have our Raven Calls, our biannual magazine. So that's what we're sharing with folks. Also, the executive order from Biden on climate change action, which would include funding for more offshore wind farms, as well as funding for FEMA to help extreme heat in certain homes because, you know, in Alaska not a lot of people have air conditioning here. So it's pretty important."

After the community gathered in the rain holding their Coppa ice cream, the play "Small Talk" was put on. 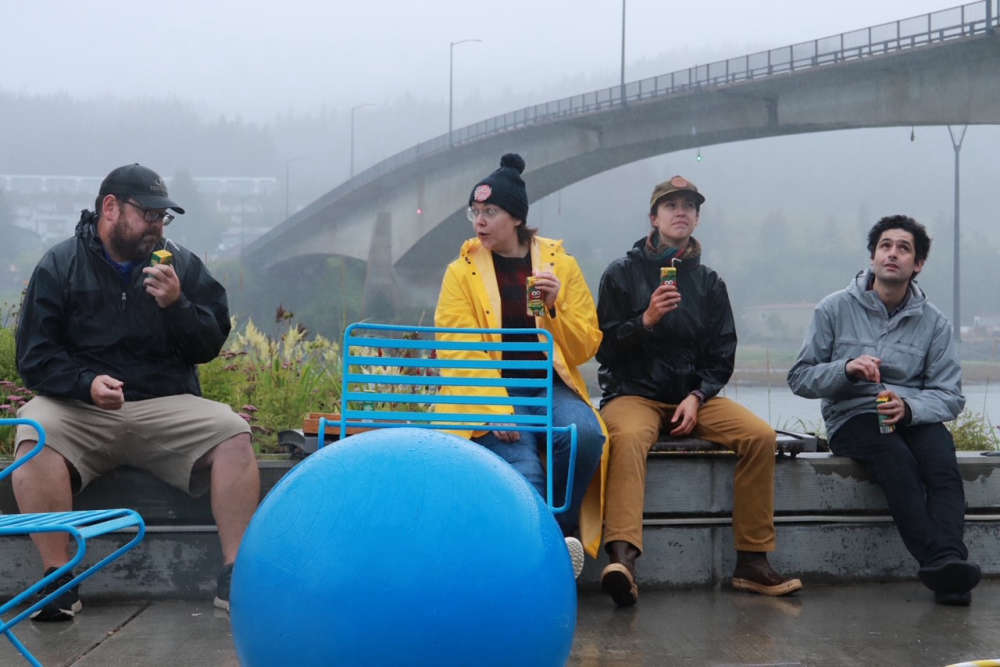 Above: From left to right: Hedges, LaVerne, Kissel, and Thillet Jr.  Below: "Small Talk" performance. 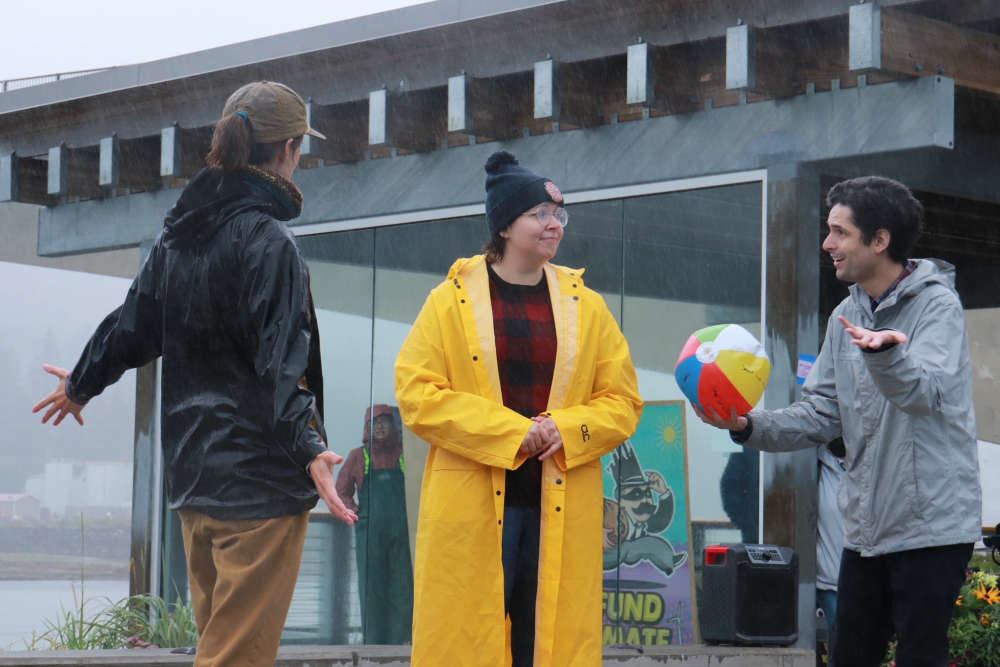 "Small Talk" was written by Kristin Ritter specifically for the climate fair.

Ritter is a playwright in Anchorage.

Valorie Kissel starred as JJ, a peripheral friend picking up trash, not sure where they fit into the group.

Hetty LaVerne as Dani, the kind of person who has created a work group to pick up trash on the beach, filled with passion.

Felix Thillet Jr. as Patrick, a friend of Dani's, wants to make a difference too, however, he's frustrated with the process.

LaVerne had this to say about "Small Talk's" message in regards to climate change.

"Our play is kind of interesting in that it touches on how some people want to just get it done as fast as we can and other people recognize that it takes time and work. So it's kind of playing on those two different sides of how we want to approach fixing our issues. But it's done in a way which is more of a social way as opposed to the actual environmental side."

"The problem is so big that we want to take huge changes to change everything but actually it's about what are the small things and things that do take time but are worth doing, even though they take time. That's a reassuring message to me when I feel like climate change feels very large and overwhelming and depressing."

Thillet Jr. commented on the other general events of the fair.

"It's a collaboration between 350 Juneau and Theater Alaska. So this is the second year of it highlighting the important issues facing our planet of climate change. And it's through an artistic form. So there's poetry, short plays, dance pieces to kind of illustrate these in a proactive, inventive way. Another play by David Hunsaker, titled 'Intervention'. There's a dance piece that's been choreographed by Hali Duran, there's an Ishmael Hope, I believe it's an original poem, which is going to be recited in T'lingit as well as translated in English."

After the theater performances that sparked insight into climate change, the crowd's attention was turned to the performance of "House on Fire" written by Michael Bucy. 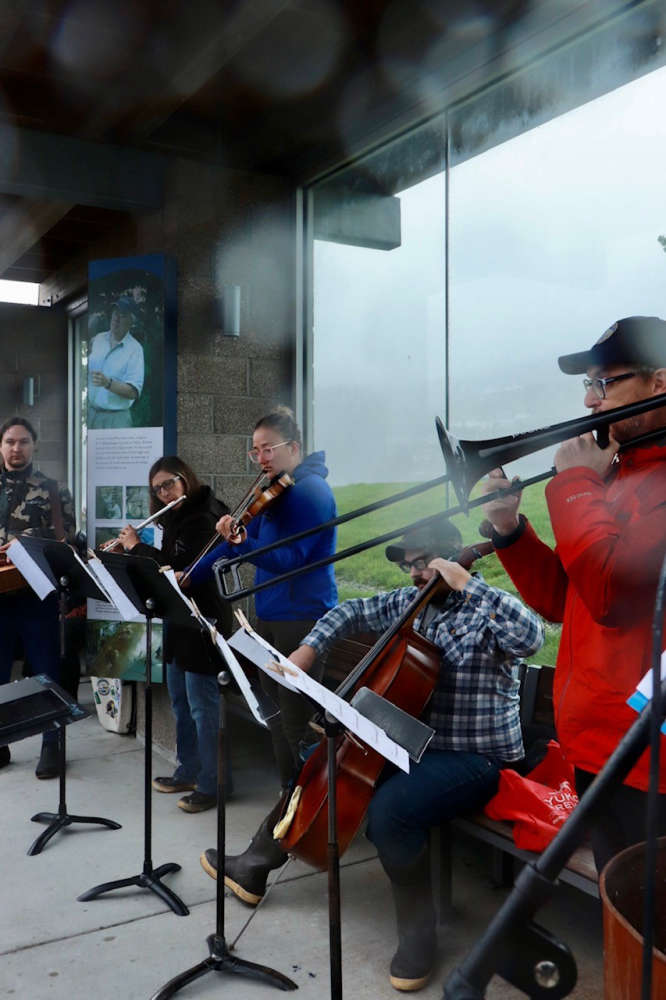 Above: "House on Fire" performance. Below: Bucy and his black trombone. 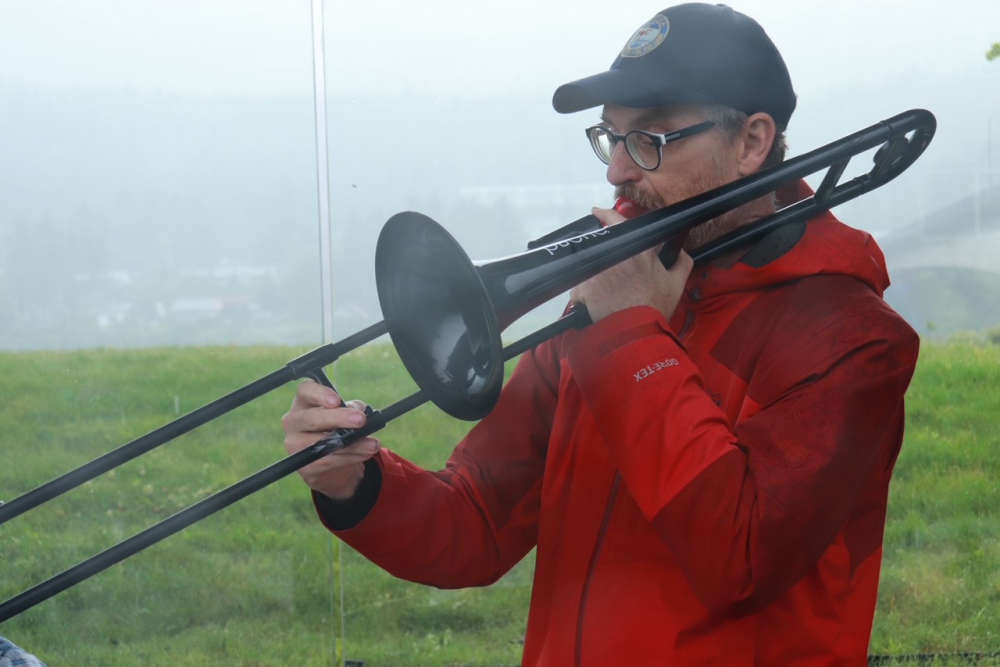 "The cello played by Ben Holst represents life on Earth, the violin and the flute play the theme of the humans, and then the narrator gets into a story of evolution. We as humans influence the environment and how we use the environment. When I pick up the trombone, it's a plastic trombone that's been sitting in an oil barrel. I take out this black trombone from the oil barrel, and it represents fossil fuels. The narrator says, now we've picked the instrument of our destruction."

"When the narrator says, 'what can we do? We've gone too far.' Originally, I wanted to smash the trombone against a cinderblock. It feels that sense of urgency. We need to do something that's dramatic, that's uncomfortable, that's extreme maybe. I decided to disassemble it, put it back in. If we could quickly and efficiently disassemble our reliance on fossil fuels that would be great."

"The musicians that played, Sally Schlichting, Ben Holst, Lindsay Clark, Todd Hunt conducting, and Jim Samar narrating. Zildjian Unzicker playing the hurdy-gurdy. They were fantastic, really wonderful to play with these musicians and I'm glad that we were able to perform it and do some small part to help us deal with climate change."

Bucy talked about what influenced "House on Fire".

And Zachary Brown, a climate change leader from Tidelines Institute in Gustavus, gave a speech focused on change and obstructing fossil fuels.

"This is the part of the talk where I'm supposed to tell you to recycle and to change your lightbulbs, I'm supposed to tell you to do things that are non-threatening that don't rock the boat. And I refuse to do that. I refuse to waste your time with false solutions. That the whole concept of the personal carbon footprint was invented by British Petroleum in 2005 in a $100 million ad campaign to convince us to blame ourselves. Because they knew that if we blamed ourselves, that if we figured that the only way to change to fix climate change was to change ourselves that it would take our eyes off the big picture."

Brown also encouraged people to vote in this upcoming election and to sign a petition "Tell BLM: Stop the Willow Carbon Bomb".

Below: Brown gives his speech. 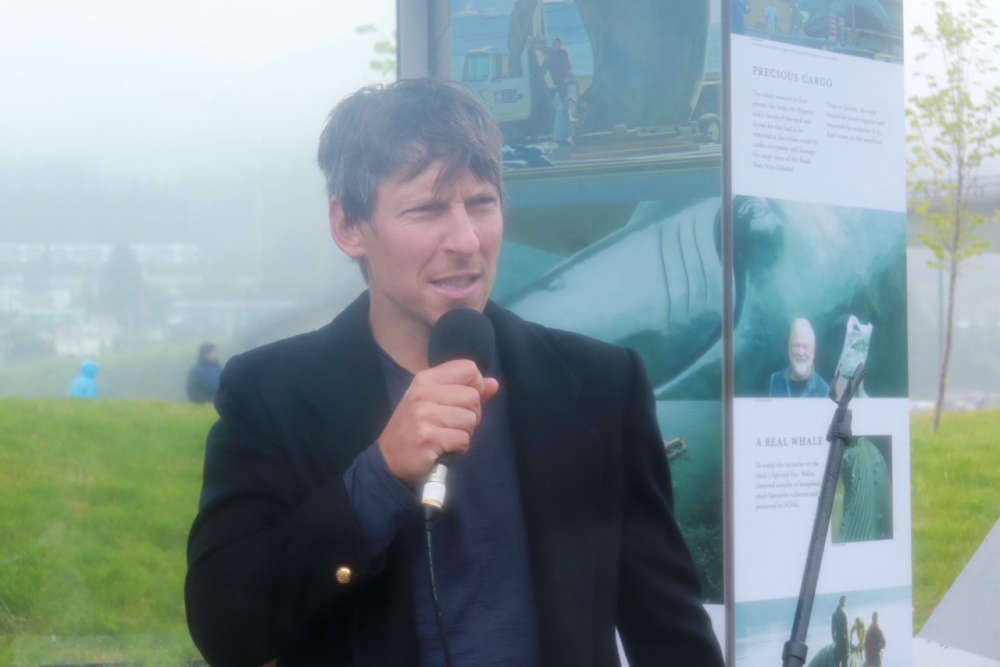