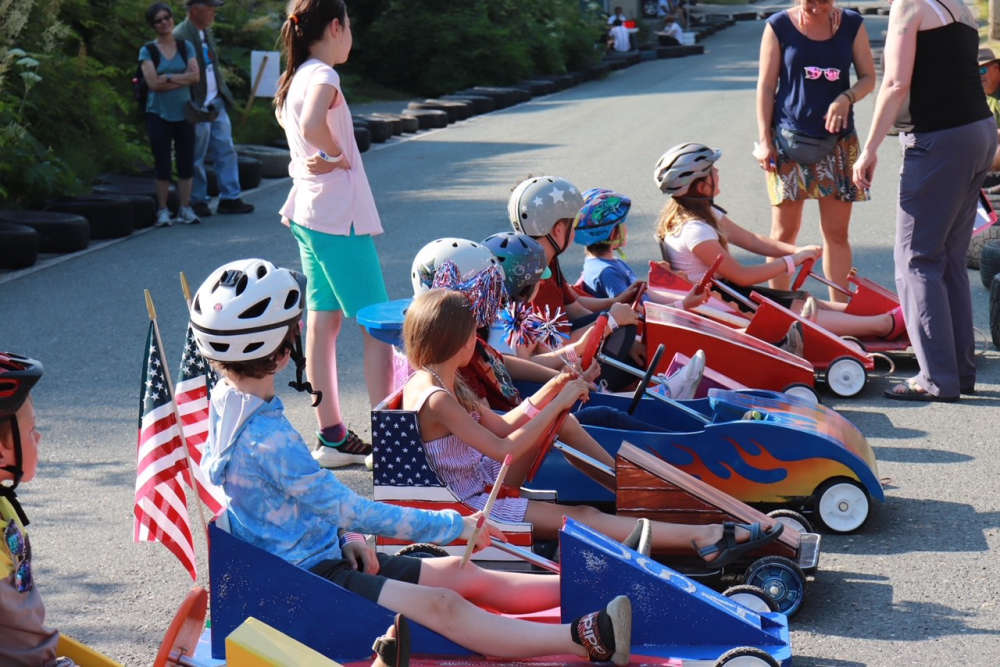 Children line up for the car show awards. (Photo courtesy of Jasz Garrett/KINY)

Juneau, Alaska (KINY) - The annual children's soapbox car race will take place tomorrow July fourth, but the Best of Show and practice race was this Sunday evening at St Ann's Ave on Douglas.

Children 5 to 10 years old can participate in the soapbox car race.

Below: At the soapbox car show and practice run, there were 10 total cars. 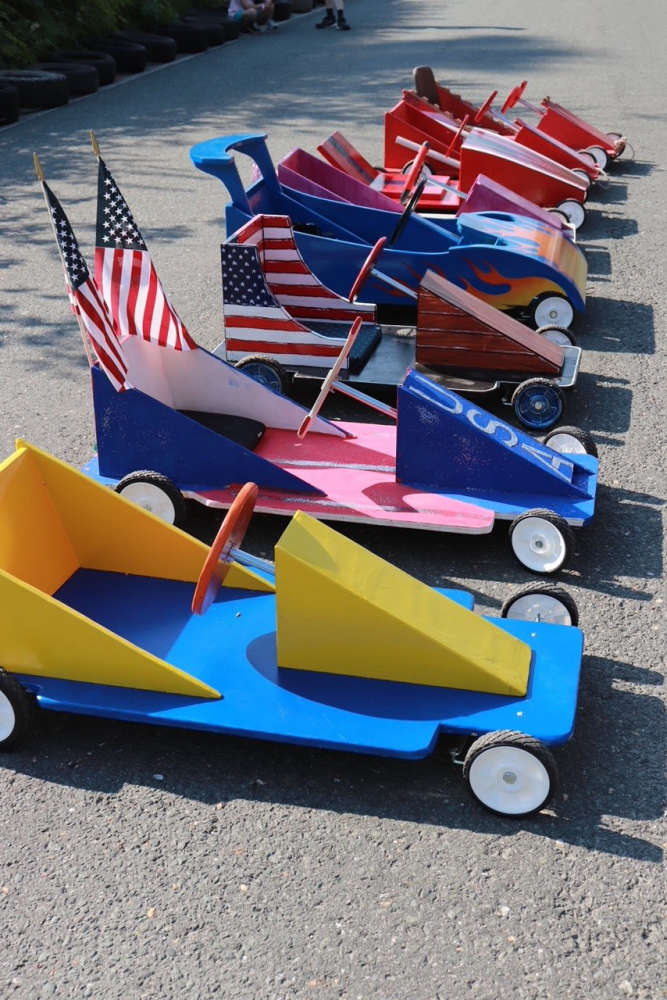 Over 100 kids participate on the fourth of July.

Children create their own soapbox cars from plywood and supply kits with wheels, then paint and decorate their cars how they see fit.

The Fourth of July Committee also has soapbox cars available for children to use if they didn't create one.

David Eckerson, a member of the Douglas Fourth of July Committee, spoke about the soapbox car show and race.

"The kids that show up tonight are a fraction of tomorrow's event. We're gonna start off with a car show. So all the kids and adults, their parents that built cars are all bringing them out. And they're kind of spacing them out here. And we're going to, at that point, kind of look them over and everybody cheers and says, oh, cool car, and the kids are real happy. And it kind of gets everybody set up for the race. And we make sure that everybody has helmets and they're safe. And we go over the categories for like, Best of Show categories, and they're looking really good. And then after that's done, then we're going to do a time trial. And the time trial, it's like a real run except it doesn't count and it's just getting the kids used to what they're going to be doing for tomorrow in the finals. So they're gonna go all the way to the top of the ramp, and then zoom, they get to go. And sometimes we'll give a kid a couple of goes if say they turn in, you know, and it's just not a good run for them. We'll say let's give it another try and get them comfortable with it. And then tomorrow, though, they only get one run in the final so it's one and done in the finals. It's go, go, go!"

Eckerson also had information about how long the soapbox car race has been happening in Juneau.

"It's been a little over 20 years here in Douglas, a few different people in charge of it on the Fourth of July Committee. This is our second year of being in charge of it again."

Some of the winning categories for the car show were most original, best pop culture, best DIY, most patriotic, best line work, most safe, most solid, best matching, and built for speed. 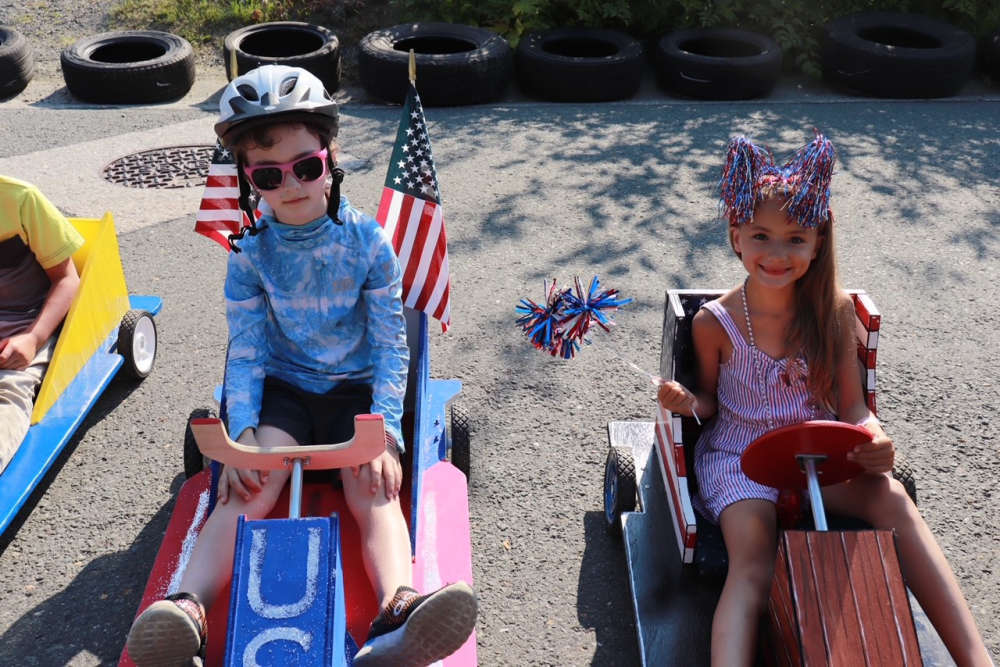 Above: Left, Oscar Smith, the winner of most patriotic, and right, Ona Eckerson, the winner of best linework, pose in their soapbox cars. Below: A child tests his car in a practice run. 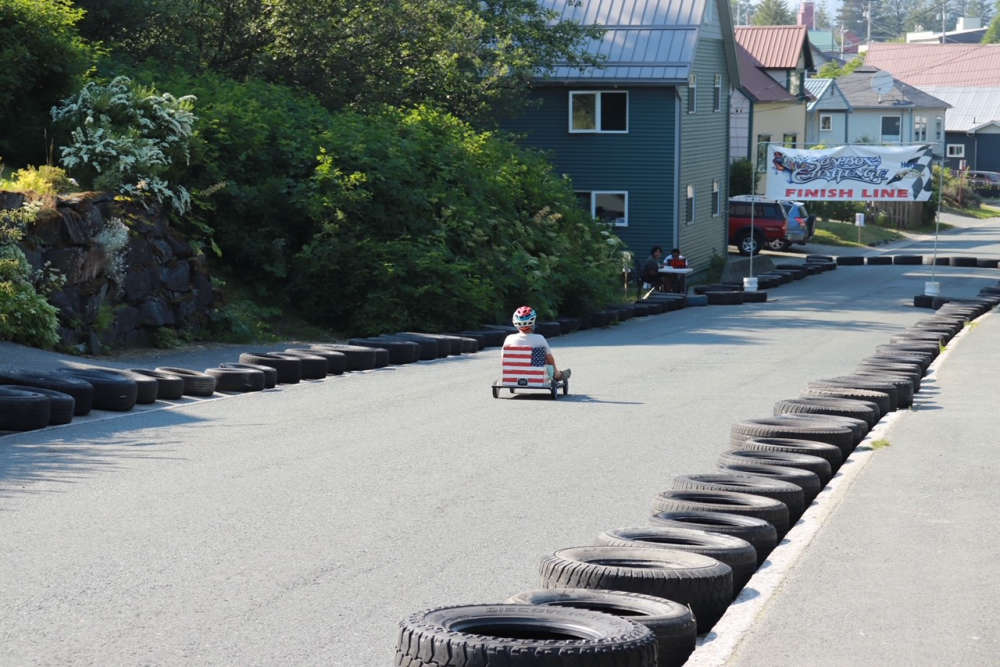 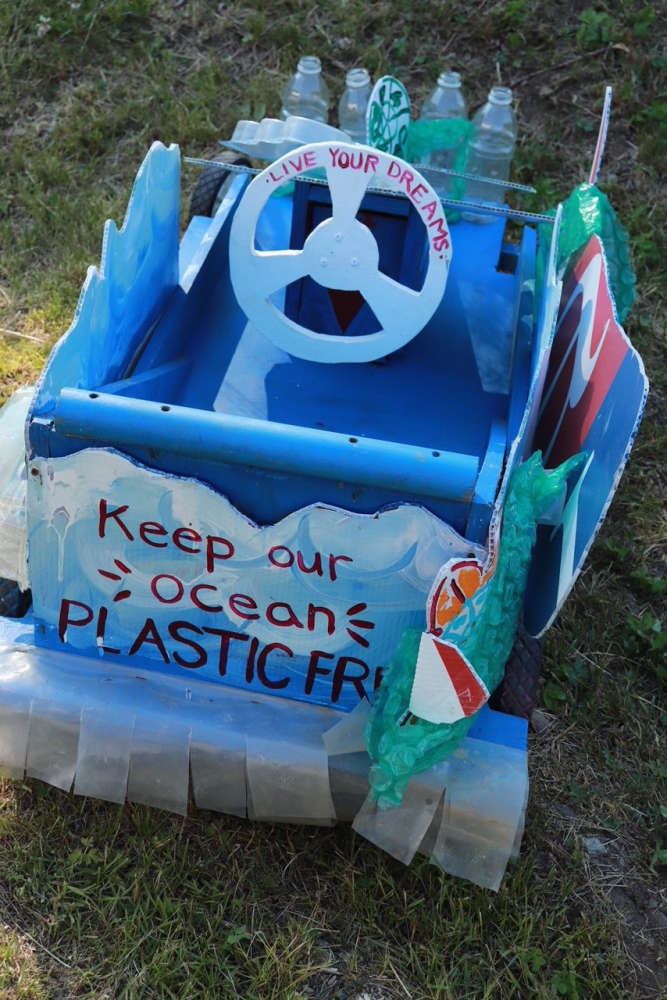