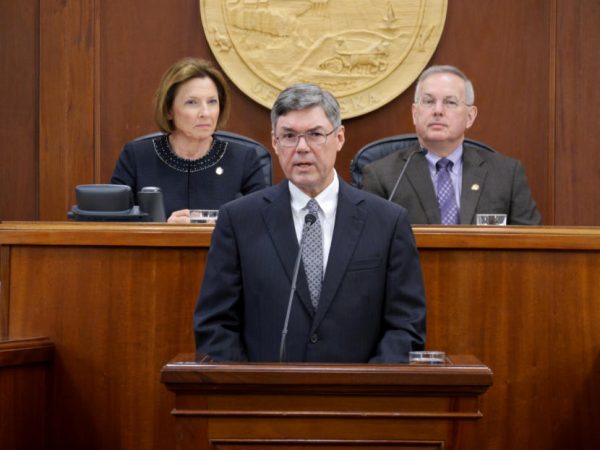 Juneau, Alaska (AP) - The chief justice of the Alaska Supreme Court recused himself Monday from hearing a case involving an effort to recall Gov. Mike Dunleavy.

Chief Justice Joel Bolger, in a written notice, said he has no personal bias or prejudice against the parties or attorneys involved in the case. But he said in his role as the administrative leader of the state court system and with the Alaska Judicial Council he made public statements “that could suggest a strong disagreement with the governor’s conduct on some very fundamental issues affecting the judicial branch, conduct that forms part of the basis for the recall petition under consideration.”

“In other words, this is a case where a reasonable person might question whether my judgment is affected by my overriding public responsibilities to the justice system,” Bolger said in recusing himself.

The Supreme Court is scheduled to hear arguments later this month. It allowed recall supporters to begin a second signature-gathering phase while it weighs an appeal.

The Recall Dunleavy campaign, among its claims, said the governor violated the law by not appointing a judge within a required time frame and improperly used his veto authority to “attack the judiciary."

Bolger last year defended the judicial council's process for vetting and nominating candidates for judgeships after Dunleavy initially refused to fill a superior court seat. After the two met, Dunleavy said Bolger provided "important clarification" on the nominations process that he had been seeking when he delayed the second appointment. Dunleavy then filled the seat.

In December, Bolger raised concerns with a $334,700 cut Dunleavy proposed to the appellate court budget for the upcoming fiscal year. Bolger said the judicial branch should be allowed to prepare its own budget request. Dunleavy later submitted an amendment seeking to restore the funding.

Dunleavy vetoed that same amount from the current budget. The administration said it was commensurate to state funding for abortions. The state Supreme Court last year struck down as unconstitutional a state law and regulation seeking to define what constitutes medically necessary abortions for Medicaid funding.

Stand Tall With Mike, a group opposing the recall, last month referred to Bolger as a “material witness” in the case. The group dropped its appeal, saying further participation in the legal process “would not be a productive use of its resources.” Mara Rabinowitz, who is with the court system, has said the group did not file a motion seeking Bolger's recusal before withdrawing its appeal.

The Department of Law, on behalf of the Division of Elections, had joined Stand Tall With Mike in appealing a lower court ruling that found the recall should be allowed to proceed. The state's appeal has continued.

Maria Bahr, a spokeswoman for the Department of Law, said the department respects Bolger’s decision.