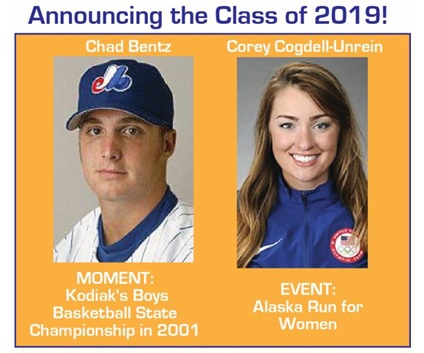 Bentz and Cogdell-Unrein were the lone selections from the people category and will be joined by the Alaska Run for Women from the event category and Kodiak's upset of perennial powerhouse East Anchorage in the 2001 high school state title game from the moment category.

This will be the 13th class to be honored by the Hall, which uses a selection process based on votes from the Alaska Sports Hall of Fame selection panel, past inductees and the public.

"We're very pleased with the choices that came out of the selection process," said Alaska Sports Hall of Fame executive director Harlow Robinson. "Alaska is such a diverse state with a rich sports culture and this group reflects that."

The Class of 2019 will be honored at a banquet in April at the Anchorage Museum.

No Alaska athlete did more with less than Bentz.

He became only the second person to play Major League Baseball after being born without one of his hands when he made his debut on April 7, 1994.

"I played baseball when I was younger, and got made fun of," Bentz said in 2004. "I didn't like going because all they did was make fun of me. So, I didn't play anymore. Then I saw Jim Abbott. He gave me the will to at least try playing again."

The 6-foot-2, 215-pound left-hander pitched in 40 career MLB games, more than any other player from Alaska. He played for the Montreal Expos in 2004 and the Florida Marlins in 2005.

Arguably his most impressive achievement is the fact that he's the only Alaskan with an MLB base hit.

"Not bad for a boy who overcame many obstacles he faced in his life, both geographical and physical," Bentz said.

Bentz, 38, played nine years in the minor leagues and racked up an 11-20 record with 23 saves in 195 appearances, almost all in relief.

After his baseball career ended in 2010, he played a season of college football at NCAA D3 Castleton State in Vermont. He was a fullback and carried the ball 12 times and scored two touchdowns.

One of the most decorated trap shooters in American history with a dozen medals, Cogdell-Unrein is a three-time Olympian and two-time Olympic bronze medalist. She's also claimed medals from World Cup and other international competitions.

At her best under pressure, she is fearless in the big moment and has medaled six different times after hitting the final target, including twice at the Olympics.

At the 2016 Games in Brazil, she upset the reigning world champion from Spain in a shootout.

The situation mirrored how she won her bronze medal at the 2008 Beijing Games in China.

On that day she was involved in a four-way shootout. After each of the first three shooters failed to hit the target, Cogdell-Unrein nailed it to claim the medal.

She is the definition of clutch.

Cogdell-Unrein, 32, is now a star in the new category of trap mixed team, which will be added to the Olympic Games in 2020.

In the first year of competition in 2018 she collected three medals, most notably a gold medal at the ISSF World Cup in Arizona and a silver at the first-ever trap mixed team tryout in Colorado.

When it comes to the event category, the Alaska Run for Women was the runaway winner. The annual Anchorage footrace was created in 1993 as a protest against an older, more established all-women's race that raised its entry fee while eliminating many of its amenities.

The Run for Women responded by collecting donations in lieu of entry fees and giving the money to breast cancer charities.

Since then, the race has become the biggest in Alaska - drawing as many as 7,000 moms, daughters, sisters, wives, aunts and grandmas - while generating more than $3.5 million in cash and health care services.

In the moment category, voters picked Kodiak's 55-52 victory over East Anchorage in the 2001 high school state championship game. The game was played at Sullivan Arena in front of a huge crowd that featured what seemed like the entire town of Kodiak.

In just her second season as bench boss, Rakers guided Kodiak back from a 10-point third-quarter deficit to cap an undefeated season for Kodiak's first state title in more than 30 years.

"Level of pride brought to Alaskans is a key consideration in deciding who gets in and the people, moment and event in this class all measure very high," said Robinson

Nearly 2,000 people participated in the public vote this November.  The cumulative public vote is submitted as one ballot.  Each selection panel member submits a ballot of their own, with the final ballot coming from the cumulative vote of the living Alaska Sports Hall of Fame inductees.

Upon enshrinement, inductee portraits are permanently displayed at the Alaska Sports Hall of Fame Gallery at the Ted Stevens Anchorage International Airport. Each inductee is recognized on the site with their own page featuring a written biography, video profile, and photo gallery.