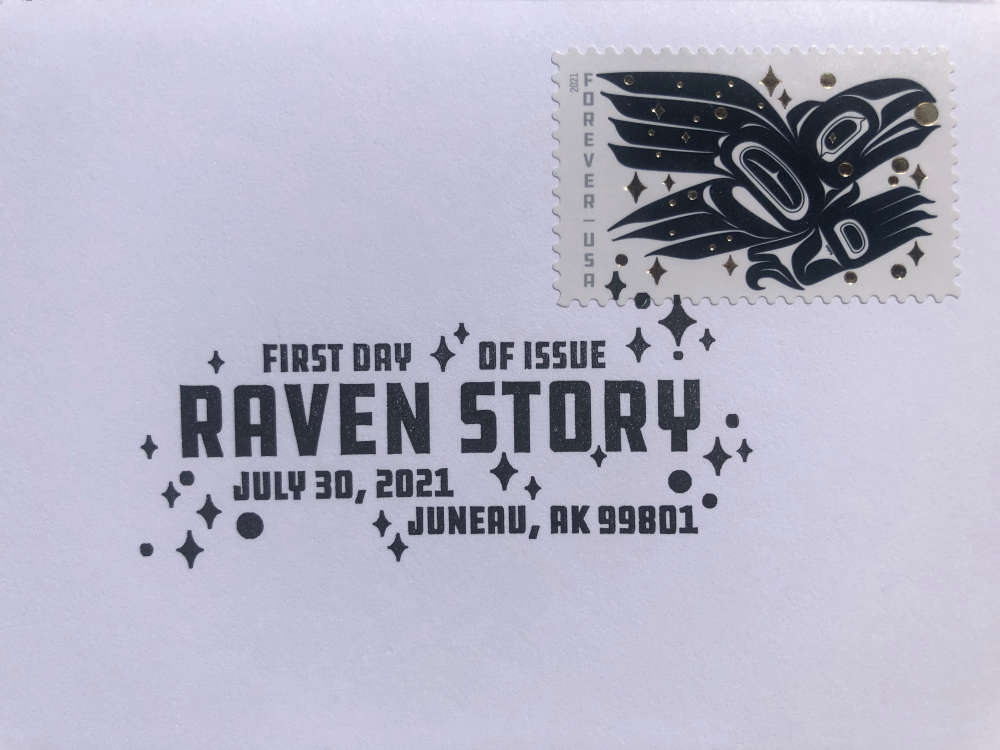 The Raven Story stamp on an envelope that contained the ceremony's program. (Anna Frazier/KINY)

Juneau, Alaska (KINY) - A large crowd gathered in front of Sealaska Heritage Institute's Walter Soboleff building in downtown Juneau on Friday morning. They were there to celebrate the official release of the Raven Story commemorative Forever stamp, designed by Juneau's Rico Worl.

"This isn't me presenting this artwork, but it is thousands of years of our people - the Tlingit people - and the people of the Pacific Northwest coast's work and hustle developing this art style," Worl said, addressing the crowd gathered in the street for the celebration.

The stamp features Raven transforming from human to bird, escaping after setting free the moon, stars, and sun. Frank Henry Kaash Katasse told the traditional story to the crowd.

Worl is a Tlingit and Athabascan artist and social designer based in Juneau, Alaska. He was approached by the US Postal Service in 2018 to design a stamp after some of his pieces on sale at the National Museum of the American Indian in Washington DC were noticed by Antonio Acalá, who later became the art director for the project.

"Most people here are aware that representing is a major value for culture," Worl said. "It's included in the way we do our introductions, it's included in the regalia we wear, and even the everyday clothes we wear sometimes. My sister Crystal and I have always worked hard to represent, particularly through the Trickster Company brand. And that's how this kind of all started. I knew it was my responsibility to represent in the best way that I could. And so that's how I ended up choosing to use the Raven story."

Worl added that he hopes this stamp will serve as an opportunity for people to learn.

The ceremony also featured remarks from executive vice president of the US Postal Service Jacqueline Krage Strako, Juneau Mayor Beth Weldon, and chair of the SHI Board of Trustees Marlene Johnson.

Raven Story Forever stamps are available for purchase from the USPS.