Check back in this story for updates, interviews, pictures, and videos as Juneau celebrates Native cultures for four days!

Visit our dedicated CELEBRATION 2016 page for the daily schedule of events, plus our exclusive collection of videos and photos! 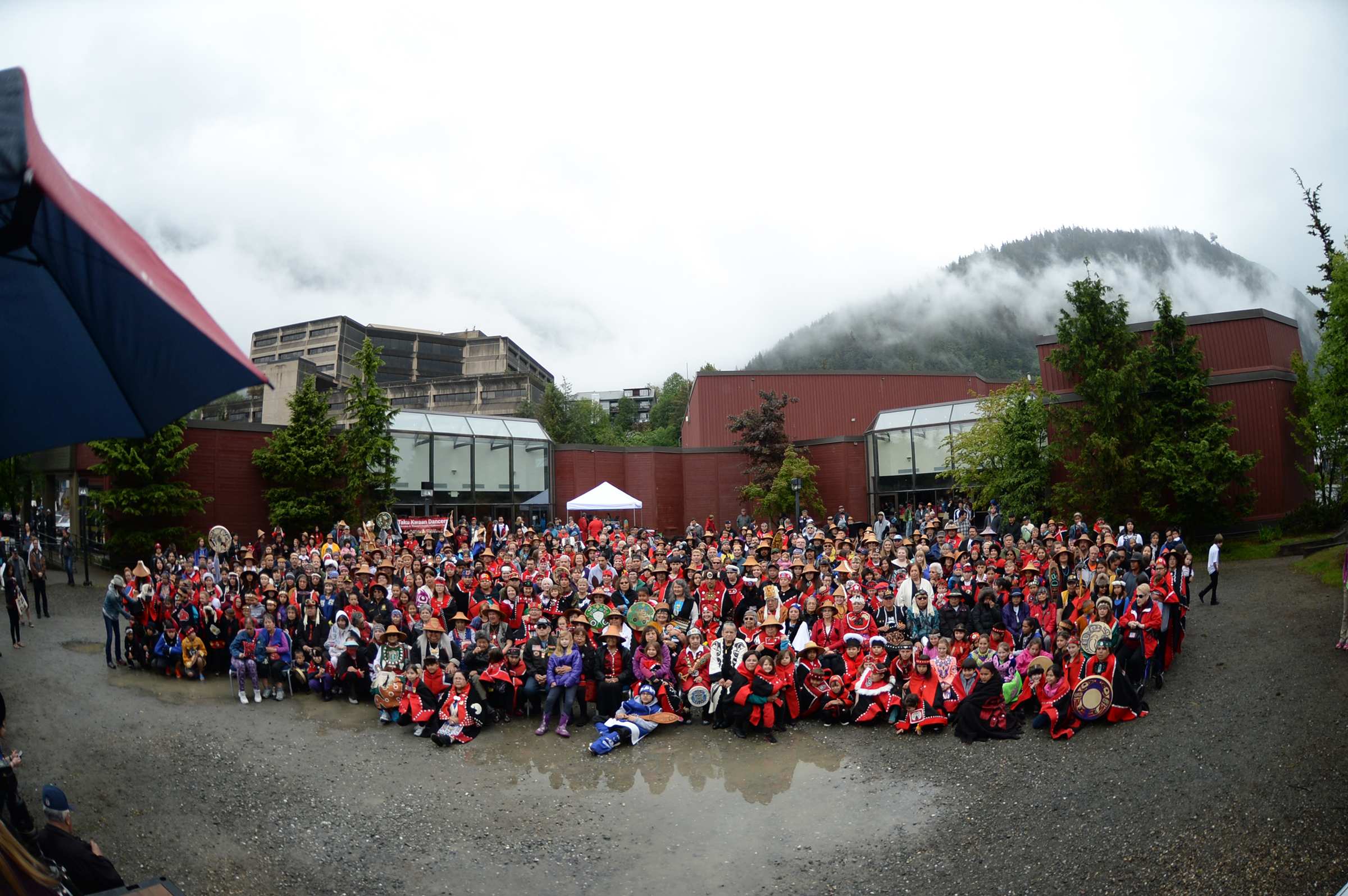 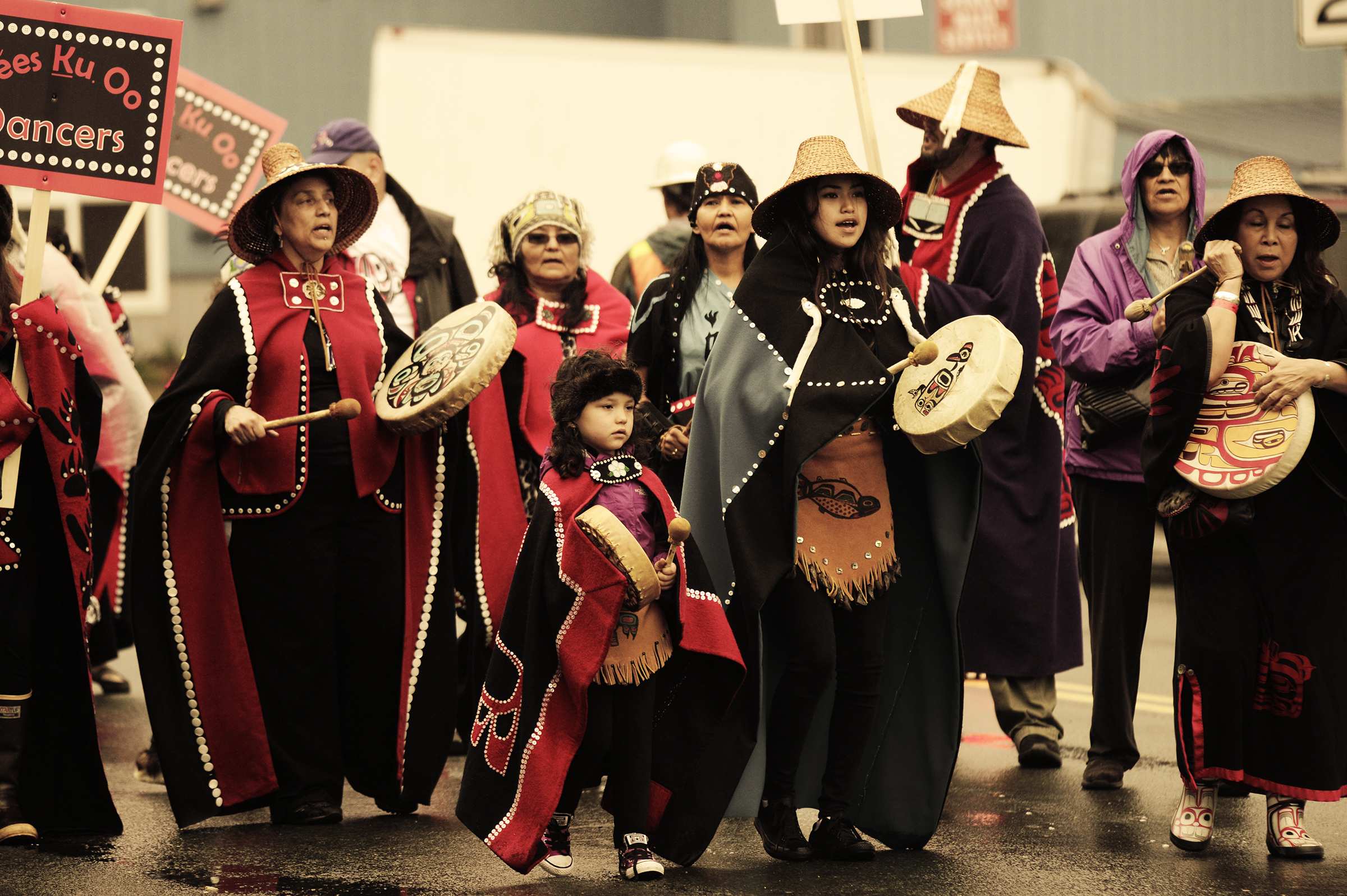 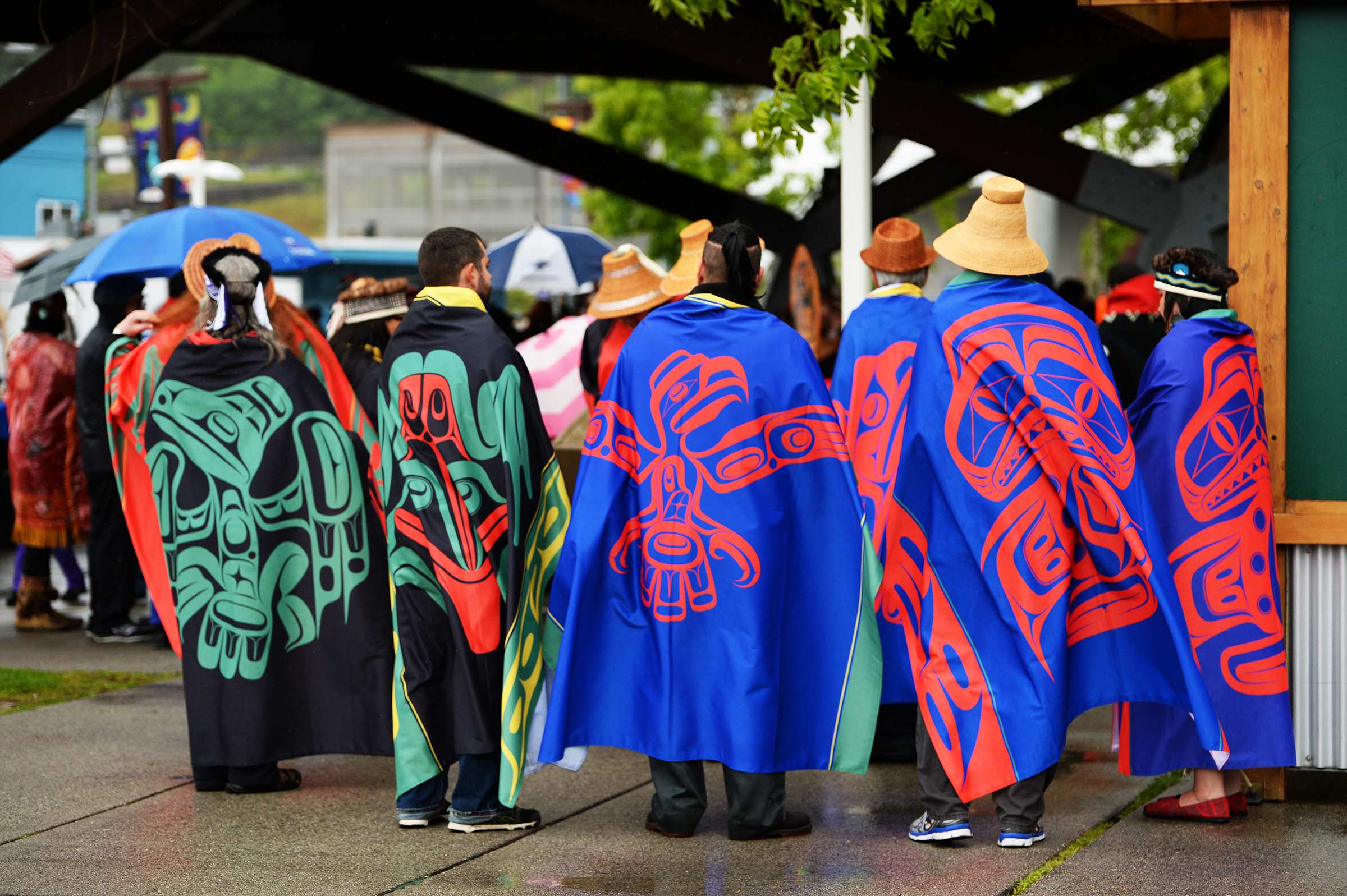 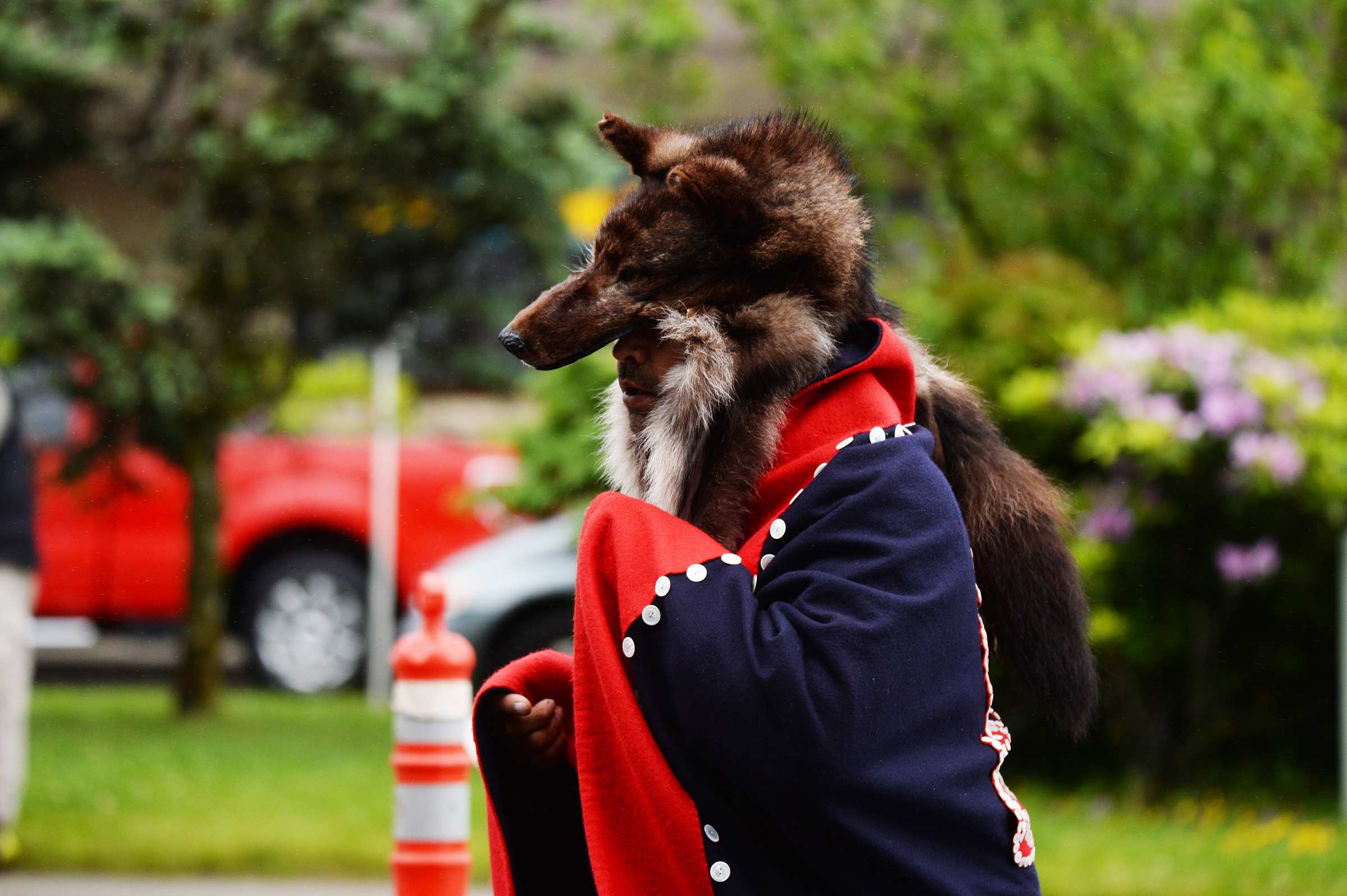 News of the North's Klas Stople was at the Celebration parade Saturday. Here's a video clip:

After a successful inaugural fashion show, which was sold out weeks in advance, Sealaska Heritage Institute says they are considering making it a permanent part of Celebration festivities.

This year 18 designers embraced a major show theme: the idea that traditional and contemporary Native art are part of the same continuum, one that has always been in motion, adapting and evolving over time.

SHI says the pieces reflected the artists’ pride in their indigenous cultural heritage and an optimism about the future possibilities of contemporary Native fashion. 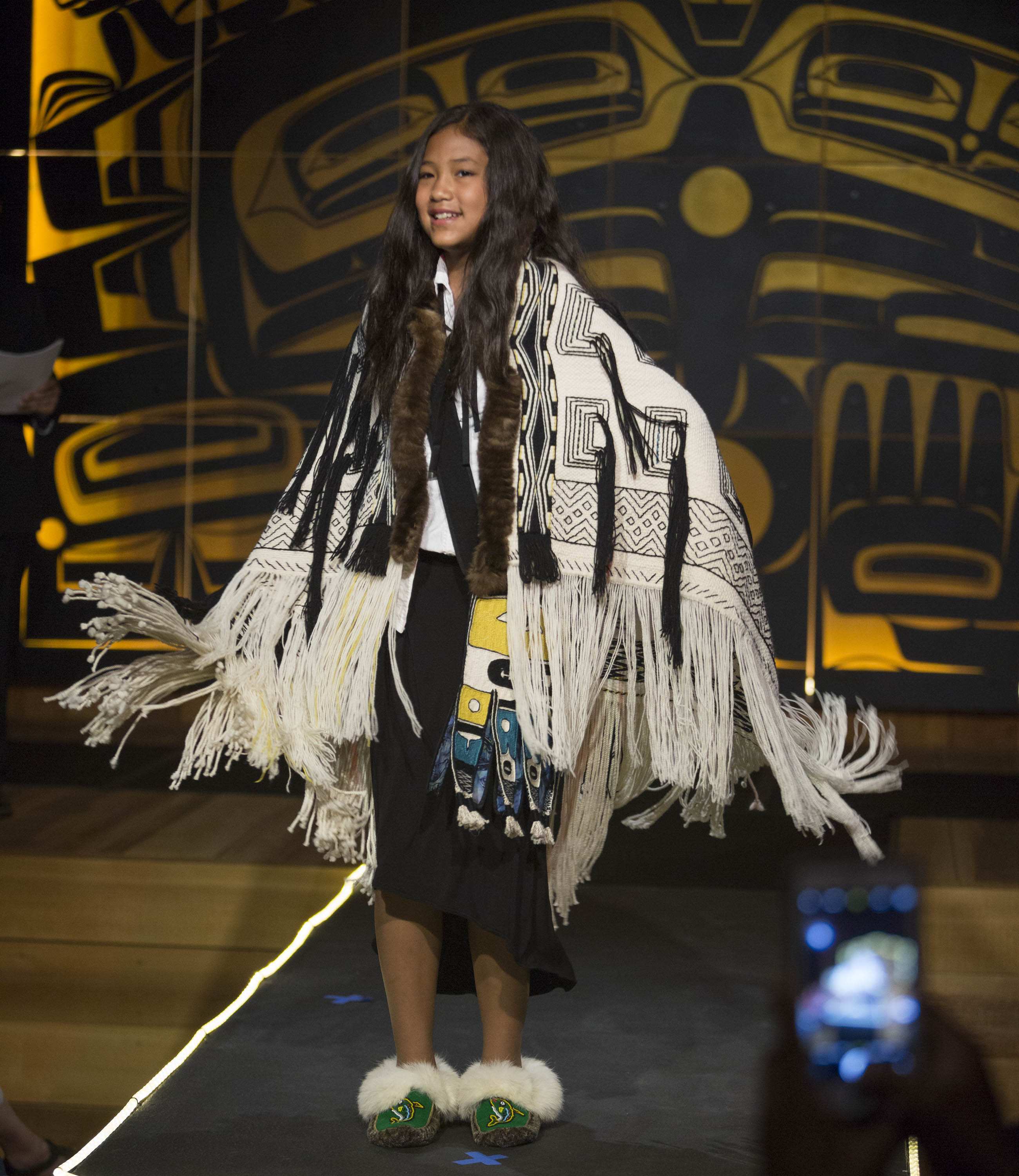 See more photos from the Celebration Fashion show on this SHI Facebook page. 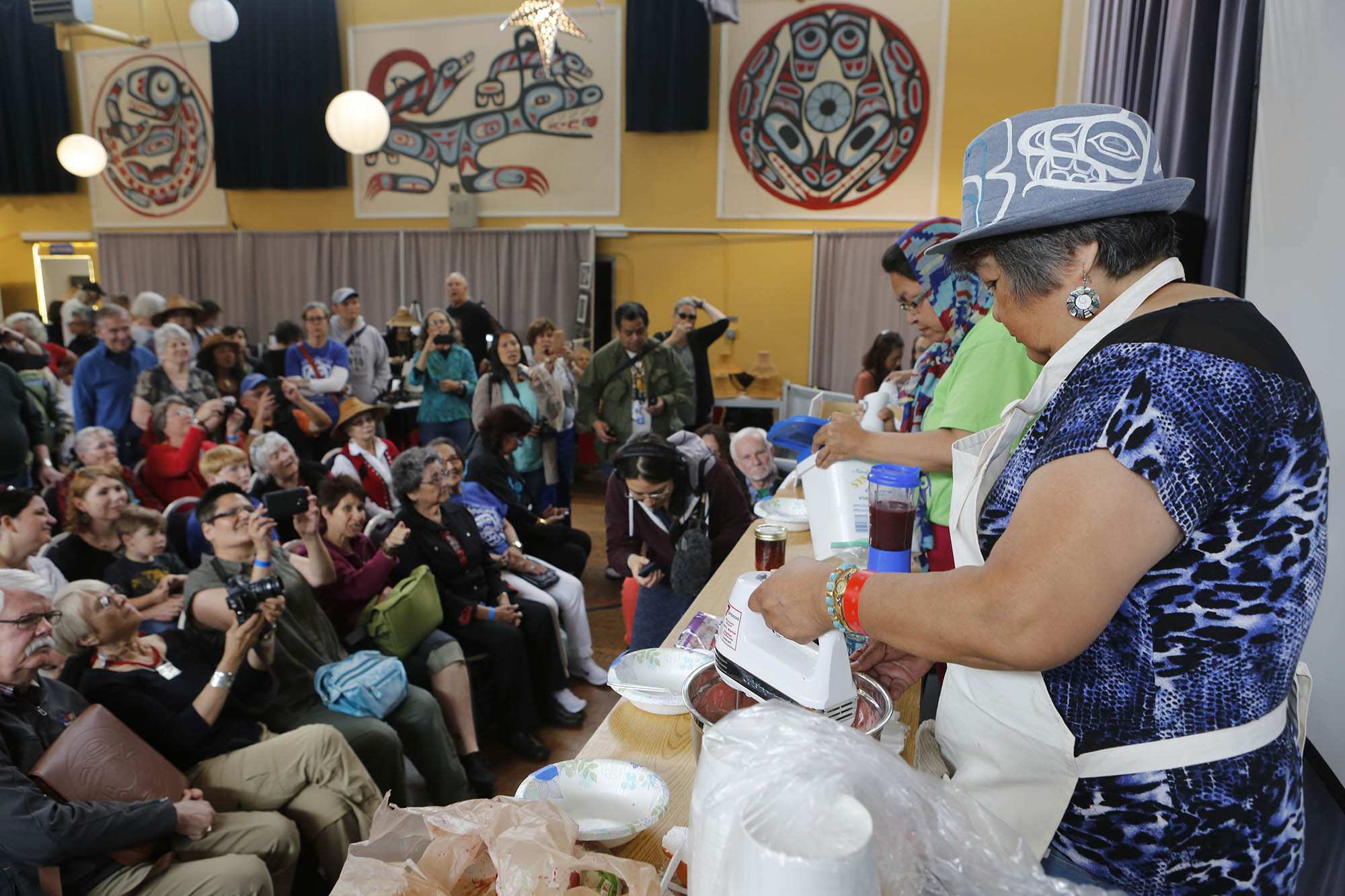 Klas Stolpe reports from Centennial Hall as the festivities begin with more Native song and dance. 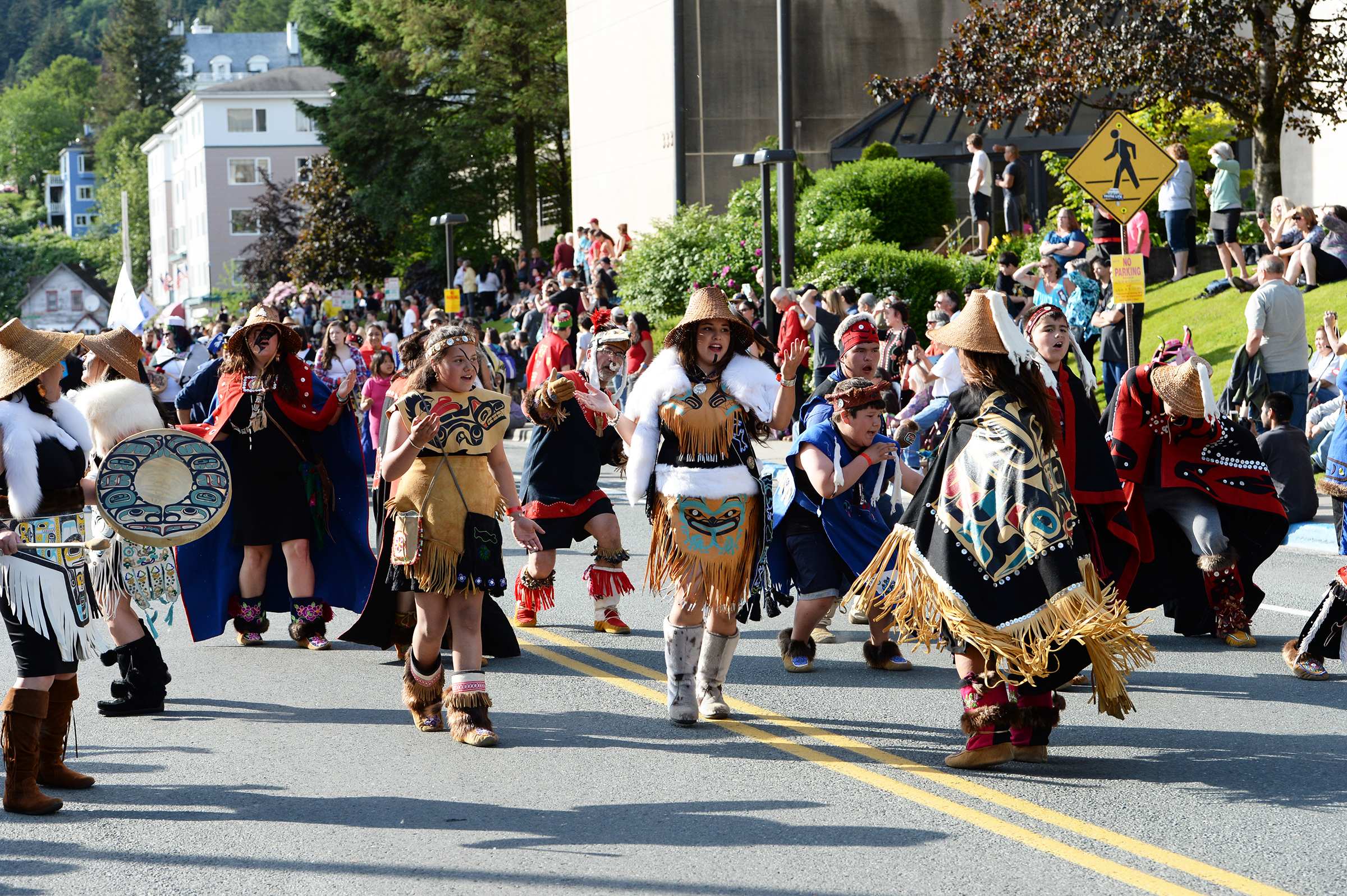 Donald Gregory and Jasmine James dropped in on Capital Chat with host Courtney Nelson this week to preview Celebration 2016, the biennial Native event running through Saturday. They discussed the parade route for Saturday morning.

They say Native dancers from Southeast Alaska and far away have descended on Juneau.

News of the North's Klas Stolpe has been live on the scene of Celebration 2016, enjoying the festivities

Klas spoke to the father of one child at the Youth/Toddler Regalia Fashion Show. 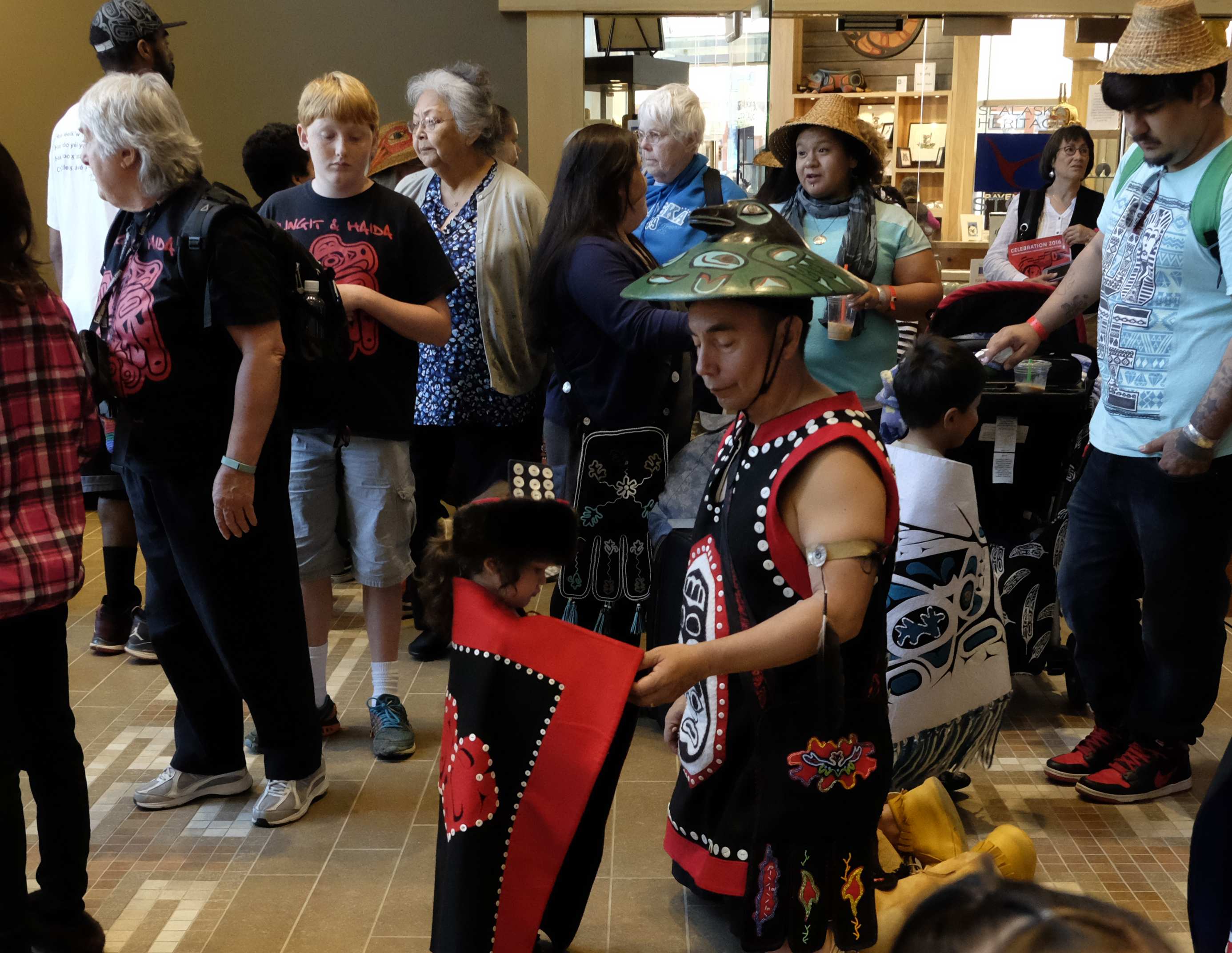 Native Alaskan dancers have descended on Juneau from the Southeast and far beyond. 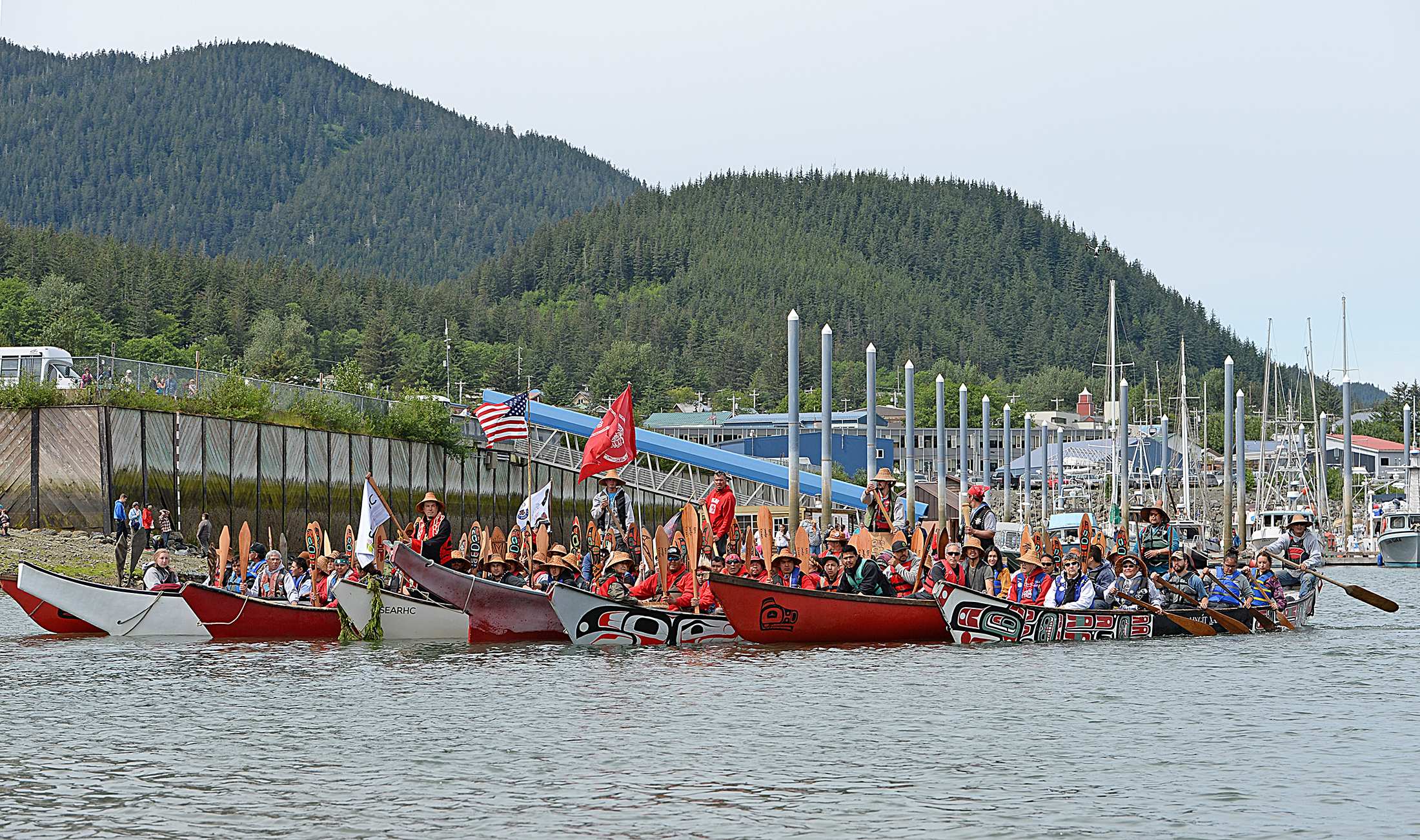 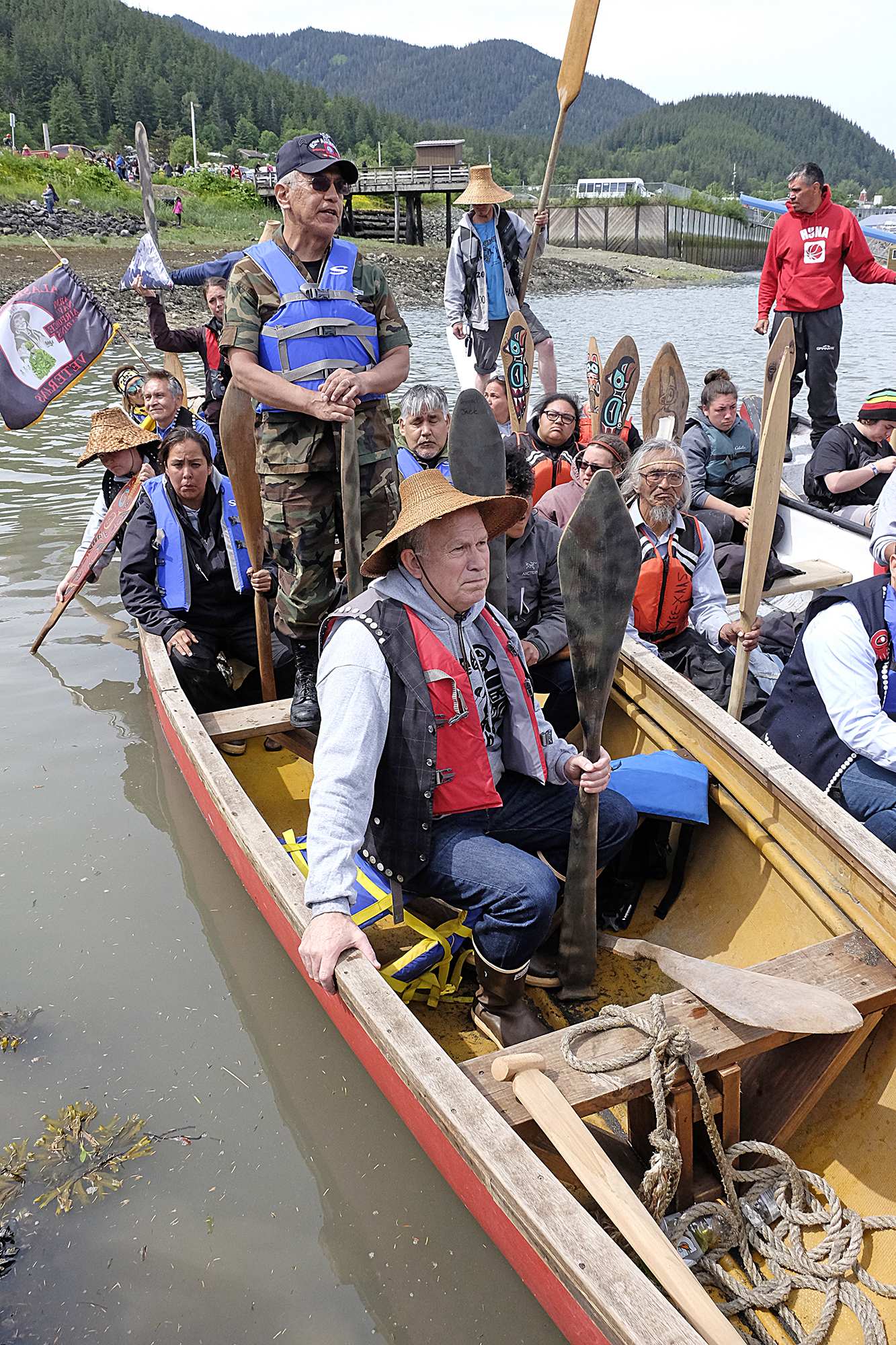 Celebration 2016 has started, and Governor Bill Walker was among the people celebrating Native Alaskan culture.

As over 300 people were expected to welcome the One People Canoe Society Wednesday at Savikko Park and the Douglas Boat Harbor, Jerry James was also live at the scene.

TUESDAY UPDATE:
SeaAlaska Heritage Institute says Celebration is one of the largest gatherings of Southeast Alaska Native peoples and is the second-largest event sponsored by Alaska Natives in the State of Alaska, drawing about 5,000 people and economically impacting Juneau with around 2 million dollars.

One new event is on weaving.

"The Chilkat Ravenstail Weavers are in the Clan House, and will be our first event," stated Jasmine. "They're also giving a class, where the public is invited to come and watch those weavers."

Gregory provided a rundown of events.

Celebration tickets go on sale at 9:00 a.m., Wednesday at Centennial Hall, good for all events but the films and fashion show.

A Celebration pass includes admission to dance performances and most events. 4-day passes are available - adults $30 - elders and youth $15. Children 6 and under get in free.

Over 300 people are expected to welcome the One People Canoe Society today at Savikko Park (Sandy Beach) and the Douglas Boat Harbor Wednesday between 11:00 and noon.  Eight canoes representing Yakutat, Hoonah, Stika, Angoon,Veteran Canoe, Kake, Ketchikan and Haines are  paddling  to Juneau for Celebration 2016.  KINY's Klas Stolpe and Jerry James  will be there to bring you the latest.

The SeaAlaska Heritage Institute hosts their biennial Celebration event for four days this week, Wednesday through Saturday, as Juneau will be filled with Native song, dance, crafts, food, even people of all ages dressed in signature regalia. News of the North will be there to report on air and on-line with daily updates, plus coming soon, KINY will feature a dedicated page with links and everything you need to know to enjoy Celebration this year!

The One People Canoe Society are paddling to Celebration 2016.   According to the paddlers' Facebook posts, the seven canoes representing Yakutat, Hoonah, Stika, Angoon,Veteran Canoe, Kake & Ketchikan are on their way and should be landing at the Douglas boat harbor around 11 a.m. to noon Wednesday. KINY's Klas Stolpe and Jerry James will be there to bring you the latest.

Among the new events this Celebration are a Native Fashion Show, Juried Youth Art Exhibit, a weaving presentation and class, a comedy show and a jazz piano concert. Celebration dance groups will participate in the Grand Entrance Procession on Wednesday from the Elizabeth Peratrovich Hall at 6 p.m. to Centennial Hall for the Welcoming Ceremony at 8 p.m. There will be over 80 dance performances in Centennial Hall and Elizabeth Peratrovich Hall beginning Thursday through Saturday. Plus there's a parade Saturday morning.

Tickets go on sale at 9am, Wednesday at Centennial Hall.

A Celebration pass includes admission to dance performances and most events at the Walter Soboleff Building and other venues.