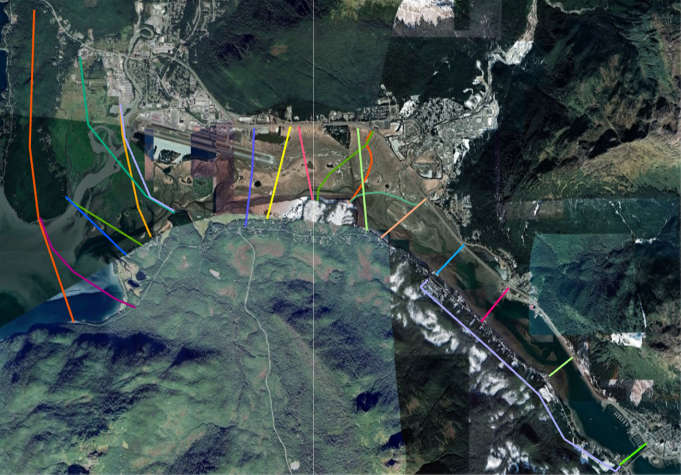 A graphic showing what has been suggested by the public. (Photo screencap.)

Juneau, Alaska (KINY) - The Juneau Assembly Public Works Committee received an update on the PEL study around a second crossing to Douglas Island.

Currently, the city is working with the Alaska Department of Transportation on a Planning and Environmental Linkage study, as explained by Juneau Public Works Director Katie Koester.

"We've been engaged with DOT, who's project lead on a Planning and Environmental Linkage study for the Juneau North Douglas crossing project, and DOWL has been contracted to do that outreach," she said. "There's been public meetings, there's been technical advisory committee meetings and stakeholder meetings."

There has been an open house event for members of the public, pop-up listening sessions, and meetings with other entities since April, as part of the study.

"Were engaged in the PEL that's going to be completed by spring of 2023. We have $7 million for NEPA and some preliminary design in a senate appropriations bill, hasn't passed or been signed into law yet, so we probably won't know that until about spring of 2023," she said. "In the meantime, we anticipate a couple of different grant opportunities opening up, potentially RAISE, maybe MEGA, INTRA, the Rural Surface Transportation grant, there are a number of different programs and I just wanted to let the Assembly know that I will be working on the vetting the design phase of this project  as a potential candidate for one of those programs."

A second public open house is scheduled for December 12 where individuals can learn about the current progress, preliminary alternatives, and initial screening criteria. That will take place at Juneau Arts & Culture Center, 4:00 - 6:00 PM.