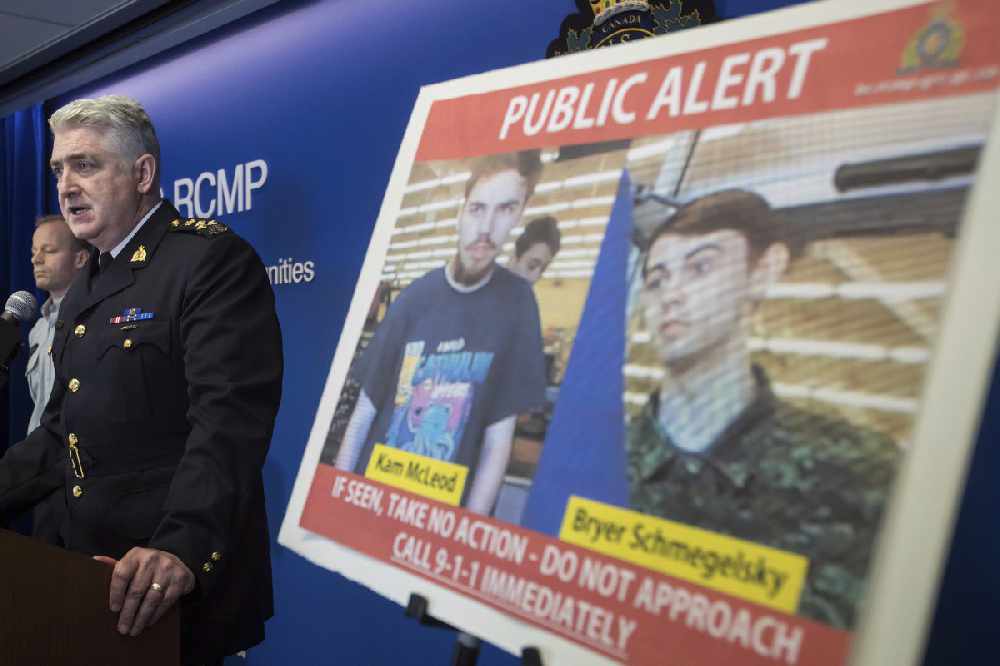 Toronto (AP) - Police said Thursday there have been two sightings of the suspects in the slaying of an American woman, her Australian boyfriend and another man in the Gillam area of Manitoba and they are believed to still be in that area despite no sightings of them since Monday.

Royal Canadian Mounted Police Cpl. Julie Courchaine said authorities have corroborated two sightings of 19-year-old Kam McLeod and 18-year-old Bryer Schmegelsky in the Gillam area. She said the sightings were prior to Monday evening's discovery of a burned-out vehicle the suspects were driving.

Courchaine said there have been no reports of stolen vehicles that could be attributed to the suspects and that is why authorities believe the men are still in the Gillam area.

Gillam is more than 2,000 miles from northern British Columbia, where another burned vehicle was found Friday and where the three people were found slain in two places.

The victims have been identified as American Chynna Deese, 24, Australian Lucas Fowler, 23, and Leonard Dyck, 64, of Vancouver. McLeod and Schmegelsky have been charged with second-degree murder in Dyck's death, whose body was discovered a week after Deese and Fowler were found shot to death.

McLeod and Schmegelsky themselves had originally been considered missing persons and only became suspects in the case Tuesday.

Schmegelsky's father, Alan Schmegelsky, said Wednesday that he expected the nationwide manhunt to end in the death of his son, who he said is on "a suicide mission."

During the investigation, police found Dyck's body roughly a mile (about 2 kilometers) from the first burned-out vehicle that was found.

That was about 300 miles from the spot along the Alaska Highway near Liard Hot Springs where Deese and Fowler were found shot dead over a week ago.

The met at a hostel in Croatia and their romance blossomed as they traveled in the U.S., Mexico, Peru and elsewhere, said the woman's older brother, British Deese. He said the couple was visiting Canadian national parks when they were killed.

Residents of Gillam were locking their doors, something that is unusual in the remote Canadian town.

Authorities in the neighboring province of Ontario were also warning the public about the suspects, who were described as armed and dangerous.