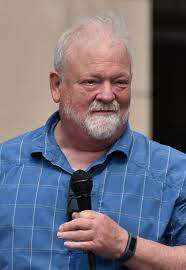 Juneau, Alaska (KINY) - Former Alaska Attorney General and Juneau Mayor Bruce Botelho in an address to the Juneau Chamber of Commerce Thursday presented reasons why he's working with an organization to oppose voter approval of a constitutional convention for Alaska which is on the ballot this November.

The question appears on the ballot every ten years.  Botelho told his audience the proposition has been rejected fairly overwhelmingly each time the question has been presented.   "I believe that we are in a high risk of a different outcome this November and there are three reasons for that," he said.

The first is the general public attitude towards government at almost every level.  "People are angry with government and government regulation.  We've seen it in our own state as we look at public reaction to COVID mandates whether masking or vaccination."

The second factor, according to Botelho, is Governor Dunleavy's own stance on changes to the constitution that have not been able to clear legislative hurdles, but which are very popular.

Lastly, Botelho said there have been proposals to change the constitution debated over time that have failed to muster sufficient energy to move forward.

Combining these three elements and support of each level there is a potential that the "dike will be breached", he said.

Botelho said of particularly dangerous for Juneau and Southeast Alaska, Botelho said are issues relating to relocating the capital and legislative sessions.

There are measures sponsored by Mat-Su Borough lawmakers calling for each that Botelho said are dead on arrival given the number of committee referrals.  He pointed that one of those lawmakers supports a constitutional convention.