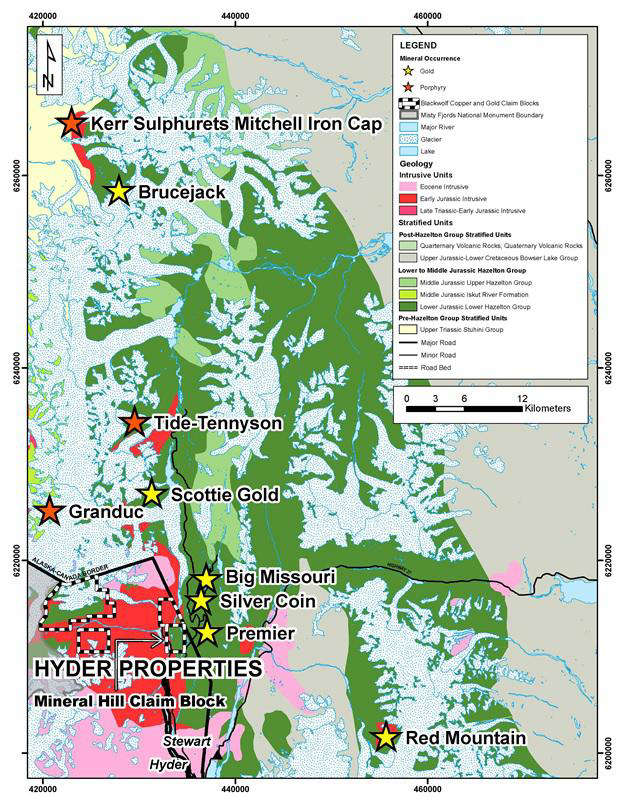 A map of the new property acquisition.

Vancouver, BC (KINY) - Blackwolf Copper and Gold has announced the acquisition of a new property, located northwest of the towns of Stewart, British Columbia and Hyder on the Alaskan side of the Golden Triangle.

The property, named Mineral Hill, is contiguous with the company’s high-grade Cantoo vein targets to the north and Ascot’s Premier Gold Project across the international boundary to the east, that is currently in development.

A total of 60 U.S. federal lode and four State of Alaska mineral claims were staked by Blackwolf in May, 2022.

“With the staking of Mineral Hill, Blackwolf now has a five-kilometer-long trend of high-grade gold-silver prospects located adjacent to a mine currently in development, that have never been drilled or explored with modern methods and deposit models,” said Rob McLeod, President and CEO of Blackwolf. “We look forward to evaluating and advancing multiple prospects on these new claims as well as drilling the adjacent Cantoo prospect during the 2022 season.”

Despite significant exploration activity in Canada, virtually no modern exploration has been performed in the Cantoo-Mineral Hill area since the 1930′s.

Bridge washouts in the early 1960s limited road access to the Properties. Blackwolf’s technical team has significant experience exploring in the Golden Triangle.