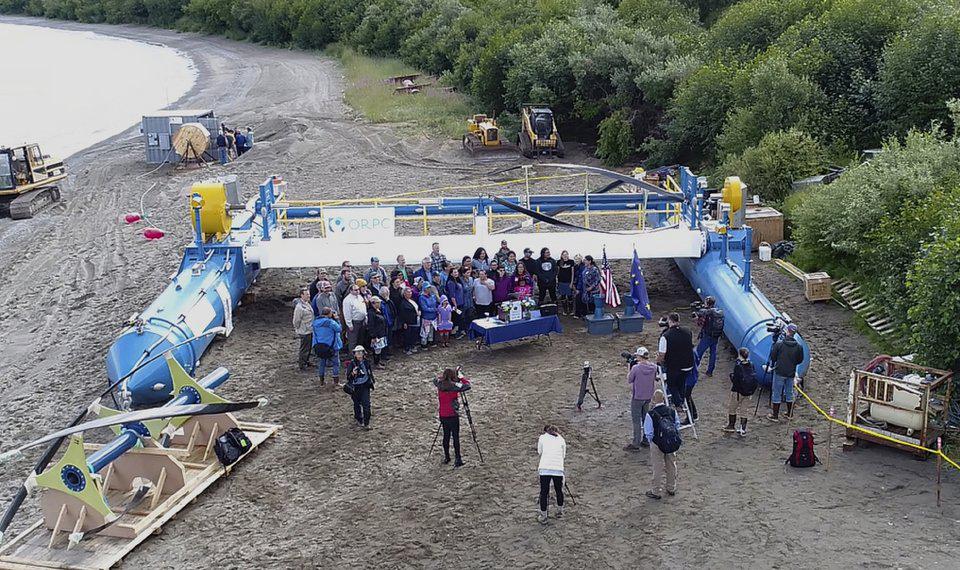 Photo credit to the Oklahoman.

ANCHORAGE, Alaska (AP) — A tiny Native village in southwest Alaska has turned to emerging technology to transform the power of a local river into a sustainable energy source that's expected to free residents from dependency on costly diesel fuel.

The village council in Igiugig is the first tribal entity in the nation licensed by the Federal Energy Regulatory Commission to harness river water that's not connected to a dam. That means the community of 70 is authorized to proceed with the complex project and that the system went through rigorous reviews by state and federal agencies, according to a U.S. Department of Energy official working with the village.

"It's a huge milestone," said DOE engineer Steve DeWitt, who manages the agency's water power projects. He said a similar non-tribal system will be installed next year in New York City's East River. But that river is tidal, not continuously flowing like the Kvichak River in Igiugig, he said.

The Alaska endeavor was more than a decade in the making, with four companies initially vying to use the community as a test bed for the new technology, village leaders say.

"We would like clean renewable energy over diesel any day," said tribal council President AlexAnna Salmon. "We are a very environmentally focused community and that is in alignment with our cultural values, which is to leave as little footprint as possible on this earth."

Salmon and other locals gathered with DeWitt and other visiting officials Tuesday to celebrate the upcoming installation of the "RivGen Power System" project developed by Portland, Maine-based Ocean Renewable Power Co. The company expects the 40-kilowatt system to supply up to one half of the Igiugig's electricity, and ultimately up to 90% after the planned installation of a second device next year.

The first underwater twin-turbine generator will ultimately be installed in coming days in the Kvichak River, part of a salmon-rich system that also provides subsistence food for the community's residents, who are Athabascan, Yup'ik and Aleut. But first, it will be set in the still waters of the nearby Iliana Lake for preliminary testing.

To reach this point, Ocean Renewable had to work out two main scenarios that worried village leaders. The system had to operate without hurting the millions of salmon passing through and it had to be able to avoid the river ice that breaks up after forming each winter.

Company officials say they're confident the turbines won't harm adult fish, based on a trial river run monitored with underwater cameras a few summers ago of a prototype of the "RivGen Power System." CEO Chris Sauer said the prototype was in place during the peak of the salmon season when at least 1.5 million fish swam by.

"There wasn't a single injury or mortality," Sauer said.

The system isn't expected to affect the smaller juvenile salmon or interact with river ice, although real-world testing has not been done in that time of year, according to Sauer.

A University of Alaska Fairbanks biologist will be on hand when the system is activated by the end of the month, according to Monty Worthington, the company's project development director.

The $4.4 million project is being paid for by state and federal funds, matching funds from the village and a development investment from Ocean Renewable, according to participants. Participants say U.S. Sen. Lisa Murkowski, R-Alaska, strongly supported the project and helped secure funding for it. Murkowski is the chair of the Senate Committee on Energy and Natural Resources. Committee spokeswoman Tonya Parish said Wednesday that Murkowski, fellow Republican U.S. Sen. Dan Sullivan of Alaska and Maine Sens. Susan Collins and Angus King wrote to Energy Secretary Rick Perry last year to urge the Energy Department to fund the project.

For local residents such as Martha Crow, the new system promises to shrink heating and power bills that can total hundreds of dollars a month. Crow said it comes just in time, with remote Alaska communities facing elimination of state funds used to subsidize rural energy costs.

Crow, who grew up in the village and lives there half the year, said her family already pays at least $200 a month on heating and more than $100 on electricity. So she welcomes the system's potential to offset the expected increase in her bills with a system that's also self-sustaining and environmentally friendlier.

"It's just amazing to see that our village is a leader in this," she said. "It's not just in Alaska but all over the world that people are interested in something like this. It's global."