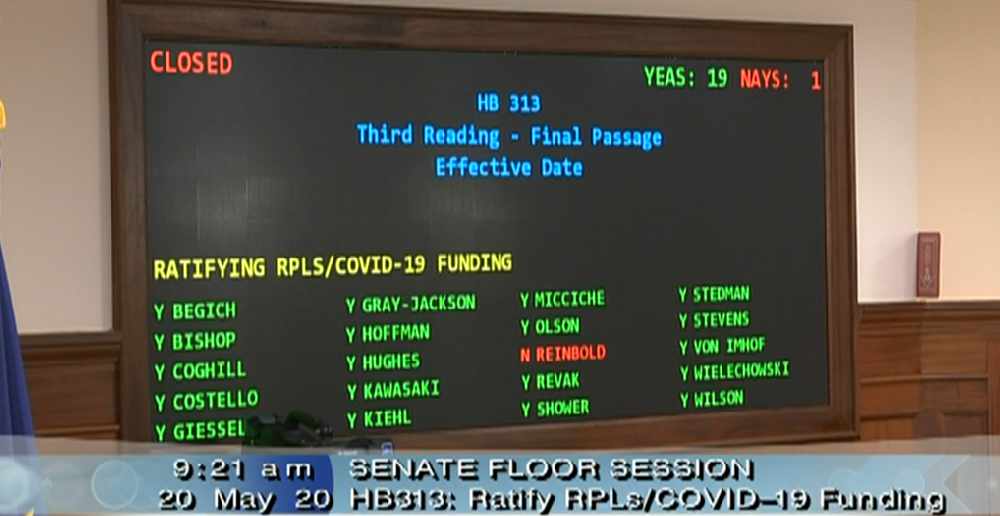 The bill is now on its way to Governor Mike Dunleavy to be signed into law. The bill has an immediate effective date and is retroactive to May 1, 2020.

Sen. Bert Stedman of Sitka spoke on the floor in support of the ratification.

"It may not be what everybody likes, it may not be what any any of us like, and I don't think any of us like the virus issue facing the state, the country and the world," Stedman said. "It's just what times we live and we have to adapt and address it head on. And this is the most effective, head-on and hard-hitting way the legislative body can do it."

Sen. Tom Begich of Anchorage also spoke after the vote on the issue of the governor’s re-opening of businesses this Friday.

"I am clear that the economic impacts of the hunker-down and the closure have been tremendous to the state," Begich said. "But so is the meaning of our system and its ability to uphold itself when under pressure, medical pressure. And the pressure of potential loss of life that's unnecessary, and the potential spread of this particular virus that I believe is now going to happen. I don't know what the driving force behind that decision is except for that we seem to have control today over this."

Begich says it’s too soon to open just yet. He cited the case totals in the multiple thousands in South Dakota, North Dakota, Wyoming and other small-population states.

Those states did not do strict stay-at-home or hunker-down orders like Alaska did.

"North Dakota now nears 2,000 cases and South Dakota has over 4,000 cases today," Begich said. "These are states that are similar populations to our own state. And yet we have now had a full re opening declared by the governor, without fully understanding what the implications of that re-opening will be."

All businesses, with few exceptions, are allowed to re-open at 8 a.m. Friday morning.