The convention in early October was a hybrid event, with participation in-person in Anchorage, as well as on-line. 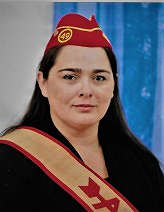