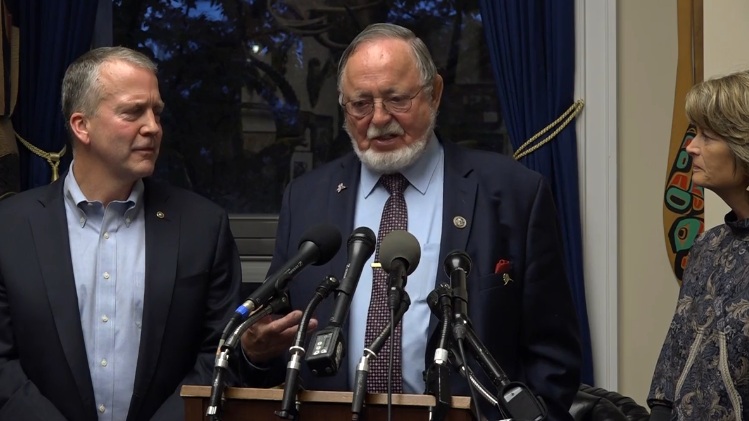 Washington, DC (KINY) - The trio says they are working with federal agencies to assess the damage and begin the recovery process.

Alaska's congressional delegation in the nation's capital is keeping a close watch on the situation on the ground following a massive 7.0 magnitude earthquake Friday morning.

According to a report by KTUU TV in Anchorage, they say they are working with federal agencies to assess the damage and begin the recovery process.

"We can always build. And we're doing that," said Rep. Don Young flanked by the state's two senators.

The lawmakers say there is a long road ahead for Alaskans, but nothing the Last Frontier cannot handle.

"We're here as a team to solve a problem that's been created by God. And we'll be able to take it and work with, and see and make sure that the people of Alaska are taken care of," said Young.

The trio says they spoke with Vice President Mike Pence. Senator Dan Sullivan (R-AK) says they are working with the Federal Emergency Management Agency and the Department of Transportation to start rebuilding, as winter weather will only make things more difficult.

"We need to get on that soon but the good news is we got the federal government fully engaged and we'll keep working with it in coordination with our governor and others in Alaska," said Sullivan.

Senator Lisa Murkowski (R-AK) says response teams want Alaskans to be cautious of possible gas leaks in their homes. The Trans-Alaska Pipeline was closed as a precautionary measure as workers assess possible damage. It has since reopened.

The lawmakers say they are planning to stay in Washington through the weekend. They say they will help coordinate federal efforts from Capitol Hill