Airlines, others to benefit from $2 Trillion rescue bill 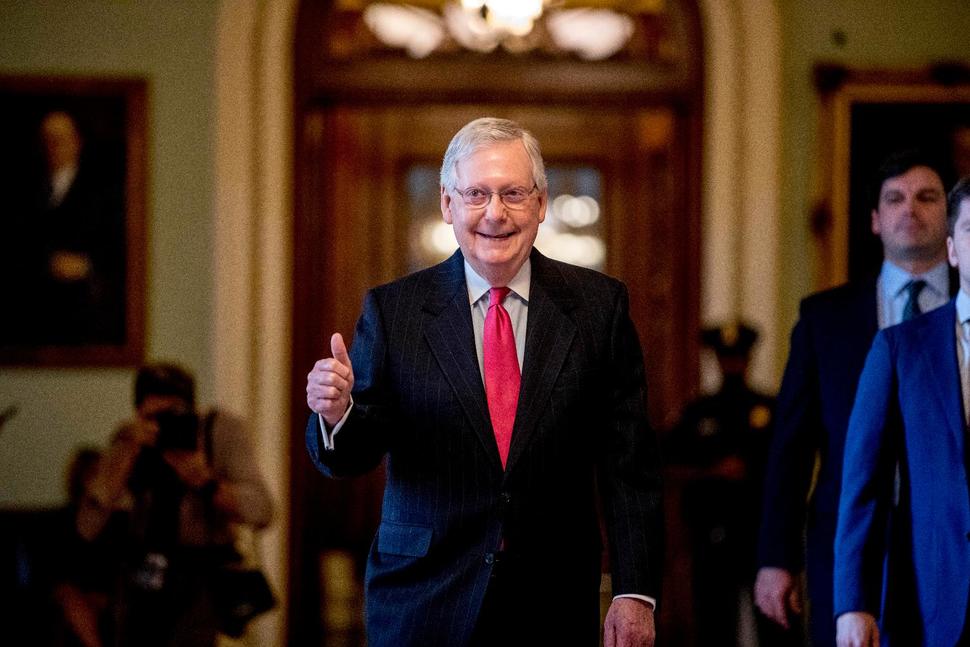 enate Majority Leader Mitch McConnell of Ky. gives a thumbs up as he leaves the Senate chamber on Capitol Hill in Washington, Wednesday, March 25, 2020, where a deal has been reached on a coronavirus bill.

The bill comes in response to the viral pandemic that has shut down businesses and crippled economies around the globe.

The bill would give direct payments to most American households of $1,200 per adult, $2,400 per couple and $500 per child. It also expands unemployment benefits and provides direct grants and loans to businesses and hospitals.

The Republican-controlled Senate must still approve the bill before sending it to the Democratic-controlled House, so final details could change. Passage in the Senate was expected later Wednesday.

Here's how various industries will benefit:

The bill says grants are exclusively to pay employee wages, salaries and benefits based on how much the airline spent on them from April through September of last year. Loans would carry conditions, including bans on companies buying back their own stock or paying dividends. Airlines would have to avoid layoffs “to the extent practicable,” and would be required to keep at least 90% of current employment levels.

The White House and Senate Republicans had initially balked at grants, but airline unions lobbied hard for them. Sara Nelson, president of the Association of Flight Attendants, called the relief package “an unprecedented win” for airline workers.

Baker does not expect many airlines to apply for the loans. Applicants must first show they can’t borrow anywhere else – U.S. airlines have recently borrowed billions – and terms for unsecured Treasury loans would be based on risk, which could mean “potentially unattractive rates,” he said.

Boeing was not mentioned by name, but the big aircraft maker whose admirers include President Donald Trump could be in line for up to $17 billion in loans and loan guarantees contained in a late version of the bill.

The bill sets aside that amount “for businesses critical to maintaining national security.”

The Washington Post, citing sources, said the provision was included largely for Boeing’s benefit. Boeing, which asked for $60 billion in aid for itself and others in the aerospace industry, declined to comment to The Associated Press.

In the past year, Boeing’s stock price and fortunes have tumbled because of the grounding of its best-selling plane after two deadly crashes, then a virus outbreak that is devastating the airlines that buy Boeing planes.

Dan Grazier, a defense expert at the Project on Government Oversight, said defense contractors are used to getting their way in Washington.

“My concern is that the company might be leveraging this crisis to shore up their own bottom line," he said.

Banks won regulatory changes that will let them make more loans without wrecking their balance sheets.

The big issue in this crisis has been individuals and businesses who were paying regularly on their debts but suddenly don't have income due to quarantines or lockdowns. Banks have been trying to defer individuals’ payments, but modifications to loans are typically booked negatively on a bank’s balance sheet.

Under the new measure, banks who do loan modifications for individuals and businesses during this crisis will not have to immediately mark them as losses. Smaller banks with under $10 billion in assets will also get a temporary reduction in how much capital they need to hold in order to meet regulators’ requirements. The change is small, going from a leveraged ratio of 9% to 8%, but banking lobbyists say it will give banks leeway to make more loans.

A large part of the bill — $367 billion — will be going to the Small Business Administration to help businesses keep paying workers. Banks are the primary conduit for those loans, and will earn fees for doling them out. That is likely to provide some sort of revenue bump for the banking industry.

The retail industry, much of which has been temporarily shuttered, pushed for cash infusions for businesses that would serve as a bridge until the virus abates. The industry was also looking for cash payments and unemployment insurance that would replace the salaries of workers who lost their jobs because of the pandemic.

Under the bill, retail workers who lost their jobs because of store closures will be able to receive unemployment insurance to replace their salaries up to $100,000. Retailers will be able to tap into a $454 billion loan pool available to companies and states. Companies that retain their workers during the crisis would get a tax credit.

The pandemic has already forced more than 180,000 “non-essential stores” to temporarily close, accounting for more than 40% of retail space, according to Neil Saunders, managing director of GlobalData Retail, a retail research firm.

The bill would make Small Business Association loans available to help small businesses cover expenses like payroll, rent, mortgages and other debt and utilities. The loans would be available to owners who work by themselves, freelancers and companies that have no more than 500 staffers at each of their locations. They’re available for businesses that can’t get credit elsewhere.

The bill caps the interest rates on the loans at 4%. The bill also provides for payments on the loans to be deferred for six months to a year.

Companies can also get tax credits if they were forced to close down. However, they cannot qualify for the credit if they’ve also received an SBA loan under the legislation.

The loans under the bill are separate from the SBA’s economic injury disaster loans; many companies have already applied for these loans.

Karen Kerrigan, president of the advocacy group Small Business & Entrepreneurship Council, said an important part of the bill was that “it supports small business efforts to maintain or hire back their workers, which is critical to keeping businesses on solid ground so they can ramp up once this crisis is behind us."

Tourist sites, airports, hotels and other travel-related businesses are facing significant declines due to the pandemic. The U.S. Travel Association — which represents 15.8 million workers — has forecast a loss of 5.9 million jobs in the industry by the end of April.

Home-sharing company Airbnb said the legislation expands the pool of people who are eligible for small business loans and unemployment insurance provisions. The bill recognizes independent contractors and sole proprietors, like people who rent out homes through Airbnb, in addition to more traditional employers.

The auto industry appears to have gotten at least some of what it wanted in the bill, mainly loans and loan guarantees for companies struggling to stay open when they’re not producing vehicles or parts. Companies could tap into $1 billion through the Defense Department to invest in manufacturing to increase production of medical protective gear for health care workers. Ford and Fiat Chrysler, for instance, say they will make masks and other devices to protect medical workers. The bill also has $1.5 billion in assistance to help rebuild manufacturing supply chains and to provide capital to local loan funds for economic recovery. Some parts suppliers would also be eligible for small business loans.

The energy sector didn't get much of what it was seeking. Trump had sought $3 billion to purchase oil to beef up the country's strategic oil reserves, which may have provided limited relief to oil and gas producers struggling with record-low prices. But that plan, which Democratic Sen. Chuck Schumer referred to as a "$3 billion bailout for big oil," was not included in the bill.

The American Exploration and Production Council, which represents 25 of the top oil and gas production companies in the country, said Wednesday it's confident the Department of Energy will be able to meet the president's directive and buy the oil.

The coal industry unsuccessfully sought more than $800 million in benefits for mining companies through reduced royalty payments and mine reclamation fees and lower taxes that fund beneficiary payments for black lung disease in miners. Meanwhile, the renewable energy industry had asked for — but did not get — extensions of deadlines related to construction or completion of solar and wind projects, without which they could lose access to time-sensitive tax credits. Industry associations were hopeful they'd be included in any later relief package.